How Wall Street came out on gay marriage 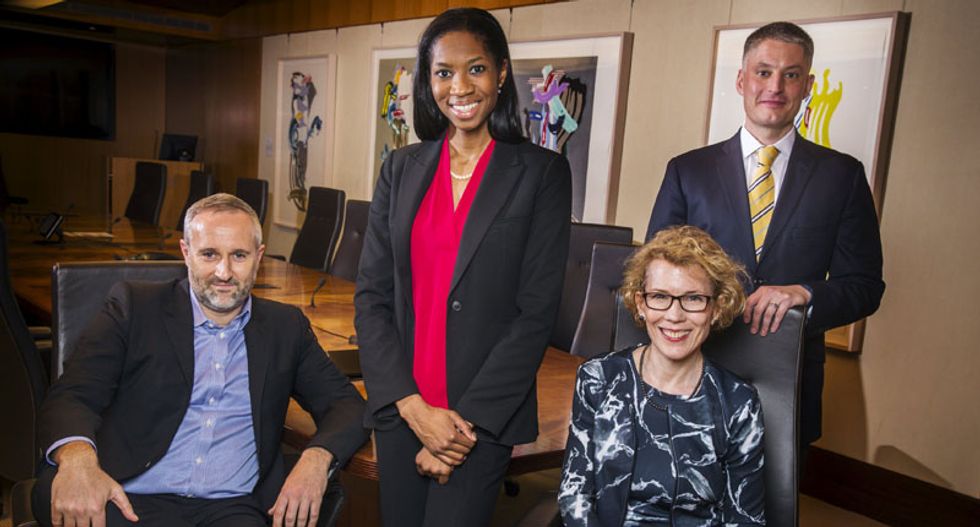 Twenty-eight of the country's biggest financial firms had made an unprecedented show of unity in support of gay marriage by urging the court to strike down state laws banning same-sex unions.

That was double the number that signed on to a similar effort in 2013, signaling how the traditionally conservative financial industry has come to publicly embrace gay rights. Then, the Supreme Court struck down a federal law that denied benefits to same-sex couples.

"Together, we pushed Wall Street to a place our industry has never gone before," Daniel Maury, a managing director at UBS Group AG, wrote in a celebratory email to his fellow members of Open Finance, a group of gay and lesbian Wall Street employees that lobbied hard for banks' signatures.

Wall Street's evolution on gay rights mirrors a broader shift on the issue in corporate America and society. But in some ways it has been a more difficult transition for a financial industry known for a macho culture famously portrayed in the 1987 movie "Wall Street" and where homophobic sentiment has in the past been widespread.

Peter Staley, who worked at J.P. Morgan in the 1980s before becoming a high-profile HIV/AIDS activist, recalled constant homophobic comments when he was a bond trader.

"For a closeted gay man, it was probably the worst environment I could have chosen," he said. "It was very infuriating and humiliating for someone who had a dark secret like I had."

In the brief, banks and other companies said they face additional costs and administrative headaches due to the patchwork of state marriage laws that help determine how benefits are administered and taxes calculated.

Support from high-profile bankers, such as Goldman Sachs Group Inc CEO Lloyd Blankfein, has helped accelerate the change in attitudes.

“It’s fair to say it’s kind of a night and day difference” when compared with tales of the trading floor from decades past, said Mark Lane, director of media relations at Barclays Plc in New York and head of a gay and lesbian employee group.

James Gorman, CEO of Morgan Stanley, said the problem had not entirely gone away, particularly in the traditionally boisterous atmosphere of trading floors.

"It is there in subtle ways and probably in unsubtle ways, for example, on trading floors I’m sure," Gorman said at a summit this week organized by Out on the Street, a gay and lesbian networking group that focuses on senior executives.

Morgan Stanley, Barclays and Goldman Sachs all signed the brief.

A number of banks, including Barclays, have rolled out so-called “straight ally” programs over the past five years in which employees act as supporters of gay and lesbian colleagues. Participants generally post a sign on their desks identifying them as allies so gay and lesbian workers can easily spot them.

NOT ALL BANKS SIGNED

In a ruling due by the end of June, the Supreme Court will decide whether states can ever restrict marriage to heterosexual couples. Same-sex marriage is currently legal in 37 states.

After the court said on Jan. 16 that it was taking up the cases, Open Finance was tasked by gay rights group Freedom to Marry with signing up Wall Street firms to the "friend-of-the-court" brief that was ultimately signed by 379 companies and business groups.

Although the nine justices aren’t required to focus attention on the briefs, dozens of which have been filed on either side, they can influence how cases are decided.

Maury and others involved in the campaign said the main obstacle to winning the banks' support was bureaucratic rather than any opposition to gay marriage.

The effort in 2013 to sign Wall Street firms up to that year’s brief was an ad hoc move led by Maury. This time there were weekly meetings and a spreadsheet that showed the status of each firm.

Their challenge was to get approval from different departments, including legal and public affairs, before chief executives made the final decision by the March 6 deadline.

Gay marriage opponents, who lack any support from the business community in briefs filed at the Supreme Court, say well-funded activists have intimidated companies into supporting their cause.

Nine Wall Street companies that are members of Open Finance did not sign the brief. Seven were foreign firms and some said they were not asked to join.

One of the nine, which Maury declined to identify, questioned whether employees would ask the firm to take a stance on other divisive social issues, such as abortion.

Bank of America Corp proved to be a challenge for Open Finance. It had not signed on to the 2013 brief and does not generally speak out on issues like gay marriage.

Todd Sears, the founder of Out on the Street, helped close the deal.

Sears called on Mark Stephanz, an openly gay vice-chairman at the bank and a member of Out on the Street’s leadership committee.

“We gave him as much information and ammunition as he needed,” Sears said. That included the list of other banks that were poised to sign. Bank of America signed up on March 2, four days before the deadline, Maury said.

Bank of America declined to comment on its internal deliberations. "Our decision to sign the brief is consistent with our HR policies and the way we treat our employees," the bank said in a statement.