Hugo Awards assaulted by Sad Puppies, who really should be called Whiny Babies 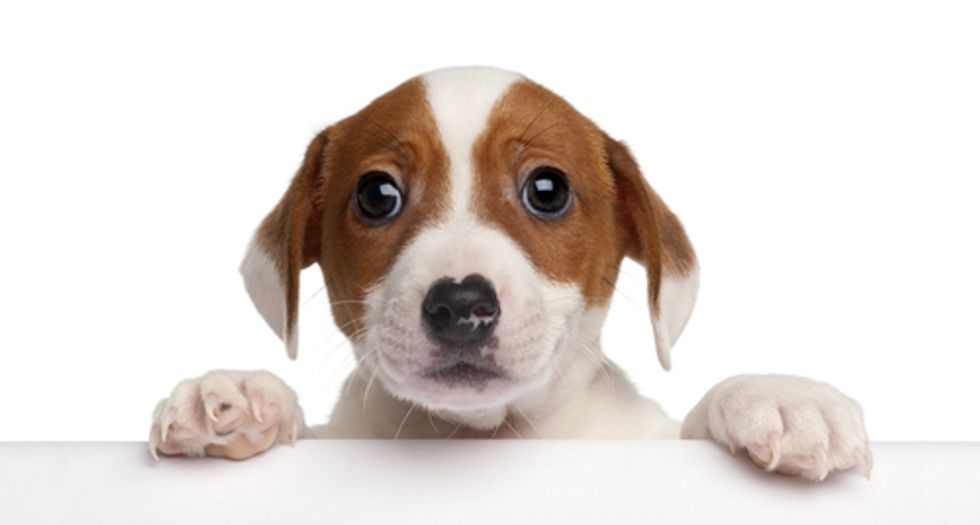 After Gamergate, I must admit I am completely burned out on angry white dudes who, apparently eager to confirm every ugly stereotype of geeks as social outcasts whose bitterness turns them into misogynist bigots, are trying to ruin everyone else's fun by trying to destroy any medium or social space if they're forced to share it with those people. (Read: anyone who isn't a white male or a token supplicant.) The latest temper tantrum, which threatens to destroy the venerable Hugo Awards, is particularly depressing. For those who don't know what's going on, a group of man-babies, self-identified as the Sad Puppies, have gamed the Hugo Awards, turning it from a celebration of the best in sci-fi to a political statement against the idea that women and people of color are equal. Daily Dot has a summary of how:

This year's nominees were announced on Saturday, and most of them came directly from a Gamergate-affiliated campaign known as Sad Puppies. By bloc-voting for a specific slate of anti-progressive authors, editors, and fans, the Sad Puppies managed to game the selection process in every major category. And yes, they did choose that name for themselves.

The Sad Puppies shortlist is the brainchild of a handful of conservative SF/F writers, headed up by authors Brad R. Torgersen, Larry Correia, and the ever-controversial Vox Day (who this year championed a more extreme "Rabid Puppies" slate). This is actually the third year the Sad Puppies encouraged their followers to vote as a bloc, but it's the first time they've made such a wide-reaching impact.

Nominees from the Sad Puppies and Rabid Puppies slates swept all of the main categories. Three of the five Best Novel nominees come from the Sad Puppies list, while the Best Novella shortlist is identical to Vox Day's own recommendations—including three separate nominations for works by John C. Wright, an author notorious for his homophobic views.

They call themselves the "Sad Puppies" without, it seems, a shred of fucking irony. Sad because they feel they are entitled to a bunch of power fantasies that reaffirm their not-so-secret belief that white men are the greatest, women exist as a sex/servant class, and people of color don't really exist at all, but they aren't getting what they think is theirs anymore. They argue that the literary/thoughtful streak of sci-fi---one that has always existed, mind you---has unfairly come to dominate the genre, particularly when it comes to critical acclaim. (The horror, I know. Can you imagine what the world has come to when people start looking for quality and depth when it comes to handing out awards?) Puppies, because they want you to think this whiny shade of bigotry is cute instead of repulsive. They really should have named themselves the Angry Vomit Puddles, if they wanted a metaphor that was more reflective of reality.

If you think I'm exaggerating, here's how one of the ringleaders, Brad R. Torgerson, defends himself:

That’s what’s happened to Science Fiction & Fantasy literature. A few decades ago, if you saw a lovely spaceship on a book cover, with a gorgeous planet in the background, you could be pretty sure you were going to get a rousing space adventure featuring starships and distant, amazing worlds. If you saw a barbarian swinging an axe? You were going to get a rousing fantasy epic with broad-chested heroes who slay monsters, and run off with beautiful women. Battle-armored interstellar jump troops shooting up alien invaders? Yup. A gritty military SF war story, where the humans defeat the odds and save the Earth. And so on, and so forth.

These days, you can’t be sure.

The book has a spaceship on the cover, but is it really going to be a story about space exploration and pioneering derring-do? Or is the story merely about racial prejudice and exploitation, with interplanetary or interstellar trappings?

There’s a sword-swinger on the cover, but is it really about knights battling dragons? Or are the dragons suddenly the good guys, and the sword-swingers are the oppressive colonizers of Dragon Land?

A planet, framed by a galactic backdrop. Could it be an actual bona fide space opera? Heroes and princesses and laser blasters? No, wait. It’s about sexism and the oppression of women.

Finally, a book with a painting of a person wearing a mechanized suit of armor! Holding a rifle! War story ahoy! Nope, wait. It’s actually about gay and transgender issues.

Or it could be about the evils of capitalism and the despotism of the wealthy.

Do you see what I am trying to say here?

Yep, that you're a moron who is so incurious that it's actually a wonder you bothered to learn to read in the first place. This post was so whiny and so anti-intellectual that I actually had to double check that it was, in fact, written by someone trying to defend the Sad Puppies, as opposed to someone doing a sarcastic parody of them.

I have no doubt, as always happens when I write about this stuff, that I'll be accused, in so many words, of being a Fake Geek Girl who does not deserve an opinion because I'm a dabbler and a hipster and blah blah blah. So fine, whatever, I'm a Fake Geek Girl. I like what I like, such as Marvel movies and A Song of Ice and Fire, and I'm not a completist nor is "geek" really my identity.

So the fuck what? You know what I do know, very well, that apparent some pinheads who bafflingly wear the title "author" don't know? That literature---high or low, genre or not---is about ideas, ideas that are often political. Even most of the escapist fantasy that nimrod here cites is actually about ideas. He just didn't notice it, because their take on it aligned with his retrograde values. A feminist story decrying patriarchy and a sexist fantasy about the ax-swinging barbarian with a beautiful woman on his arm are both stories about the oppression of women. The difference is the first story denounces it and the second story valorizes it. The Sad Puppies want you to believe they're protesting the politicization of sci-fi and fantasy, but what they're actually doing is throwing a tantrum because the political themes that are transcendent right now are ones that don't flatter their small-minded sensibilities. Hell, half the reason isn't even really that liberalism is a thing so much as people start getting tired of the same simplistic fantasies and want to start asking harder questions.

Glad to see George R.R. Martin has weighed in:

Call it block voting. Call it ballot stuffing. Call it gaming the system. There's truth to all of those characterizations.

You can't call it cheating, though. It was all within the rules.

But many things can be legal, and still bad... and this is one of those, from where I sit.

I think the Sad Puppies have broken the Hugo Awards, and I am not sure they can ever be repaired.

Of course, the reason A Song of Ice and Fire is so good is it is a preeminent example of exactly that kind of thoughtful, subversive talk on the tropes the Sad Puppies want to see regurgitated thoughtlessly into infinity. So I suspect his words will be ignored.