'I wasn't afraid to die. It wasn't about me': Holocaust survivor defied death three times to save her sister 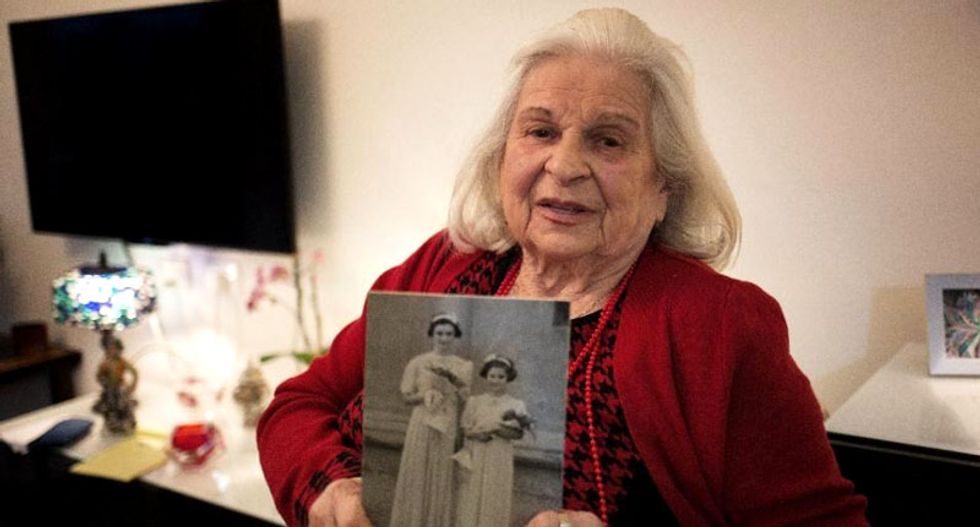 Suzanna Brau, who experienced the horrors of the Holocaust, holds a photo of herself and her sister Agi during an interview with AFP in Shoresh, a small village west of Jerusalem on April 14, 2015 (AFP Photo/Menahem Kahana)

Suzanna Braun, who experienced the horrors of the Holocaust and defied death at least three times, believes she survived because of her determination to save her sister -- and some divine intervention.

The first time she beat death was sheer luck.

Suzanna was just two weeks shy of 16 when she, her sister Agi and her parents were rounded up in their hometown of Kosice, in what is now Slovakia, and sent to the Nazi death camp Auschwitz-Birkenau.

There, the women were separated from the men. As her father was taken away to the gas chambers, he shouted his last words to her: "Take care of your sister!"

Agi, four years older than her sister, was already in ill health.

Now 86 and living in a retirement home in Shoresh, a small village west of Jerusalem, Suzanna recalls every detail of how the women were stripped and herded into the "showers" where there was a faint odour of gas.

Locked behind a steel door with soap in their hands, some women waited for water. Others, who had heard the rumours, began panicking.

It was only when the doors opened they realised they had cheated death.

"They were out of gas," she told AFP in an interview as Israel began marking Holocaust memorial day and 70 years since the end of the war.

Wearing dresses from gypsies killed before them, they were loaded onto trucks and driven to Estonia to join thousands of other women on a death march aimed at killing or weakening as many as possible.

After her mother was shot dead during the march, Suzanna did not speak for a month.

But it hardened her resolve to look after her only surviving relative.

"I didn't think about anything, only how to save my sister. Because father asked me to take care of her."

At one point, they were forced to cross a wide river but Agi could not swim so Suzanna made makeshift wooden floats to carry her to the other side.

They survived the march but were taken to Stuffhof camp in Poland where Agi was put into the infirmary and Suzanna would sneak in food for her at night.

When the Nazis realised Russian forces were heading toward the camp, they attempted to kill as many inmates as possible with lethal injections containing strychnine and gasoline.

As the Nazi orderly was going from woman to woman injecting the poison, Suzanna told her sister and three other women to turn their arms over so the injection would hopefully miss a vein.

Looking around, Suzanna seized a wad of hay from their bedding and began putting pressure on her arm, she recounted.

Quickly she started digging into the flesh with stalks of hay to gouge out the poison. She managed to do the same for her sister and another woman.

Covered in blood, she dragged her sister to a nearby hill and rolled her down it. A Nazi officer was passing so she played dead, and he kicked her down the same hill.

She then got her sister to an abandoned cowshed where she nourished her with leftover milk until Russian forces arrived the next day.

Not long after, at a hospital in Danzig, Agi's life was once again saved by medical staff who amputated her gangrened feet.

"The whole time, not my brain but rather divine providence worked for me," Suzanna said of her survival.

"And I cooperated with that providence, with the sixth sense."

The two eventually immigrated to Israel where Suzanna married, had a daughter and now has two grandchildren. Agi, who married but remained childless, eventually died in 2013, aged 88.

That was when Suzanna decided to go public with the sisters' story by going back to her hometown along with filmmaker Yarden Karmin to document her story.

The documentary, called "In The Third Person", is being given its first private screening on Wednesday, as Israel marks 70 years since the liberation of the camps and the end of the war.

"This entire story is being told because since I wanted to commemorate her," she said.

"My last task is not to live well, go to the cinema and other frivolities – but to tell the story."

All along it was about saving her big sister.

"I wasn't afraid to die. It wasn't about me," she said, explaining that the film was a way of preserving her memory.

"I wanted something to remain after her."