'I'm happy to be back': On Iowa backroads, Hillary Clinton re-introduces herself 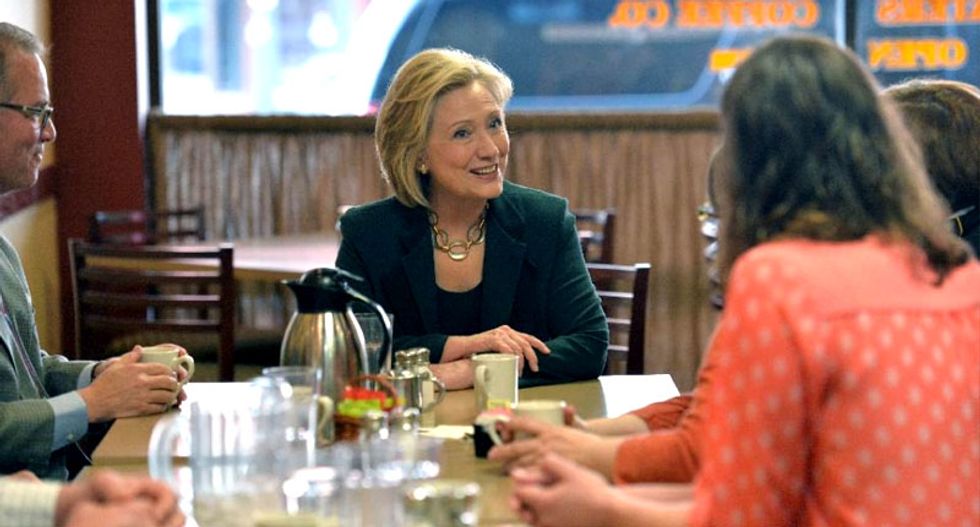 Democratic Presidential hopeful and former US Secretary of State, Hillary Clinton has coffee with members of the community at the Tremont Grille in Marshalltown, Iowa on April 15, 2015 (AFP Photo/Michael B. Thomas)

In small-town Iowa, Hillary Clinton is starting a new chapter. Her sights glued to the White House, she says she wants to engage "everyday Americans," but she has remained vague about her policy plans.

"I'm happy to be back," the famous Democrat told a group of small-business owners and activists early Wednesday at the Tremont Grille in Marshalltown.

The singular energy of her campaign launch, after months of preparation and expectation, was uncorked a day earlier when the former secretary of state and first lady popped in for coffee in the riverfront town of Le Claire, and held a roundtable at a community college in Monticello.

She has kept the wheels of her black road-trip van rolling ever since she announced her new White House bid, and is spending her first days criss-crossing this crucial state, "talking to the people" on the ground and projecting the image of a populist as she re-introduces herself to voters.

Iowa is the first state to vote early next year in the primary races. By positioning herself as a down-to-earth champion of the middle class, she hopes to conjure the magic that eluded her eight years ago, when then-senator Barack Obama scored an upset victory over Clinton in Iowa and went on to win the presidency.

In Monticello it was Clinton asking the questions, probing students about their classes and career choices, but also recalling the arrival of her first granddaughter and using that to help explain her decision to dive into another presidential contest.

"I want every child in our country to have every opportunity and that's one of the main reasons why I have decided to run," she said.

She arranged more low-key meetings Wednesday, including at a family-run fruit business in Norwalk, near Iowa's capital city Des Moines.

It's all in striking contrast to her previous campaign, which often gave off the feeling that Clinton was secluded in a bubble, partitioned from the people by a phalanx of advisors and handlers.

Today's Clinton "seems determined to prove -- perhaps to the point of overcompensation -- that she will not repeat the mistakes that plagued her 2008 campaign," The New York Times assessed.

Her political rivals have slammed her Iowa roadtrip as political artifice that will crack well before election day November 2016.

And when Clinton looks to the future, her critics are happy to point to her past. Republican Senator Marco Rubio, in launching his presidential campaign Monday, dismissed Clinton as "a leader from yesterday."

The chairman of the Republican Party in Iowa, Jeff Kaufmann, welcomed the Democratic frontrunner with a series of questions.

"How can someone who has been a DC insider for decades bring the fresh perspective we so desperately need in Washington?" he asked.

"How are Iowans supposed to trust you when your decades in DC have been marked with endless scandal and controversy?"

Beyond the competing interpretations of her record, Clinton, a former US senator, is expected to deliver details on her political philosophy and platform.

In Monticello she laid out "four big fights:" building "the economy of tomorrow;" strengthening families and communities; fixing a "dysfunctional" political system; and protecting national security.

Asked about her schedule for unveiling her platform, Clinton offered only that she will be "rolling out very specific policies over the weeks and months ahead."

But she did highlight the need to reform US campaign finance and get "unaccountable money out of it once and for all."

But she declined to elaborate on the issue, on which several candidates including Obama have made several empty promises.

Her reference to an old Obama pledge highlights a daunting challenge facing Clinton's campaign: How, in the 18 months ahead, does she make her campaign feel and sound and look fresh and original?

"It's very difficult at the end of a two-term presidency (in one's own party) to claim that you are going to be the candidate of change," explained political science professor Brendan Nyhan of Dartmouth College.

With the exception of Republican George Bush, who won in 1988 after Ronald Reagan's eight years as president, no party since World War II has managed to hold the White House for a third straight term.