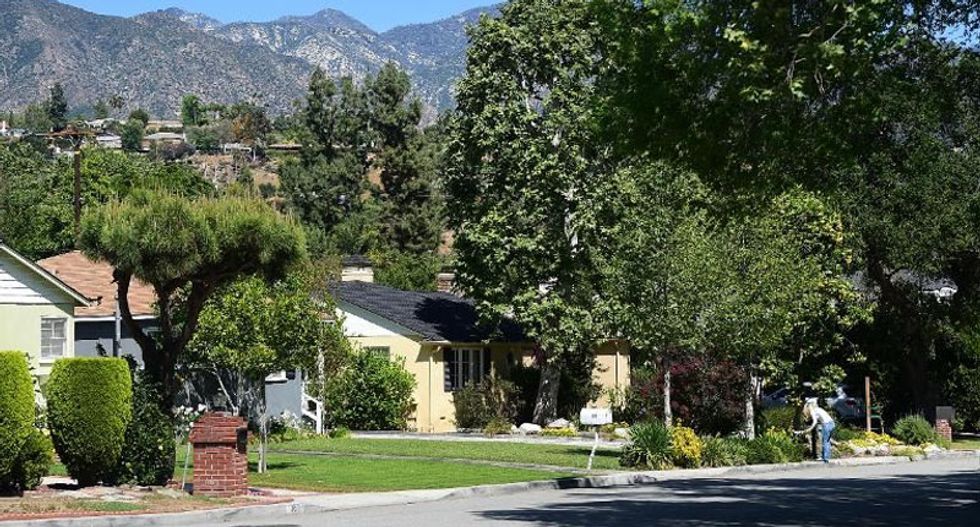 With its lush shrubs and manicured lawns, posh Beverly Hills is being shoved somewhere it's never been -- pinched by deepening drought, mandatory cuts and now potential fines. Even its mega-rich have had to shut the spigot, under fire for over-watering.

"The lady of the house now has come to terms. She is going to let the garden die," Mexican-born long-time gardener Gilberto, who declined to give his family name, told AFP, outside an elegant two-story home of an octogenarian surrounded by a wall of shrubbery.

"She says that the important thing now is to cut back. Because this has become reallly serious," he added, adjusting his big straw hat to keep the scorching sun out of his eyes.

California is now in its worst drought since records began, now in its fourth year. Reservoirs are nearing empty, agriculture has been hard hit.

For the inhabitants of this enclave of extreme wealth, a water shortage usually has meant they simply paid more for the water they used -- which might be more, instead of less.

But in the crisis -- in this state which has a climate ranging from Mediterranean to desert -- has turned so harsh that Governor Jerry Brown has ordered 25-percent cuts in water use to try to put a dent in the crisis.

On average wealthier neighborhoods like Beverly Hills consume three times more water than less affluent ones, according to a recent study by researchers at the University of California Los Angeles (UCLA).

"With income and water use so tightly bound together, further incentive must be given to higher water users -- and thus higher-income customers -- to conserve more," the study said.

Brown's 25 percent reductions would be achieved by ramping up enforcement to prevent wasteful water use, while investing in technologies designed to make California more drought-resilient.

The order also set out new measures to reduce water use, including the replacement of 50 million square feet (4.6 million square meters) of lawns with drought-tolerant landscaping.

It can be a tough sell for people with plenty to spend. And many Americans who developed California came from the wetter US East, used to rolling lawns, hedges and flower beds.

But "really, everyone here has got the message on what is happening" in terms of drought, said Onesimo Jauregui, another gardener from Mexico, hose in hand, carefully watering plants in front of another mansion.

"For some weeks now, the people who live around here have been watering less. A lot of them are putting gravel everywhere the green used to be," he said.

As he said, many Beverly Hills residents have started giving some thought to the crisis. And some have reduced the time irrigation systems are run.

Others have opted to replace some of their plantings with others that have deeper roots and look fine with less frequent watering.

But getting out of the typical American mindset of homes needing big lawns and gardens remains a challenge.

"It is a huge culture change -- and a way of thinking," said Trish Ray, with the city's of Beverly Hills' public works office.

"What we have to work on with our citizens is how do we redefine what a garden city means," she said. With some changes made, "it may look a little different, but it's just as beautiful."

The move to fining hasn't started yet, but could soon if the situation does not change.