Is there a method to Rand Paul's temper tantrums? 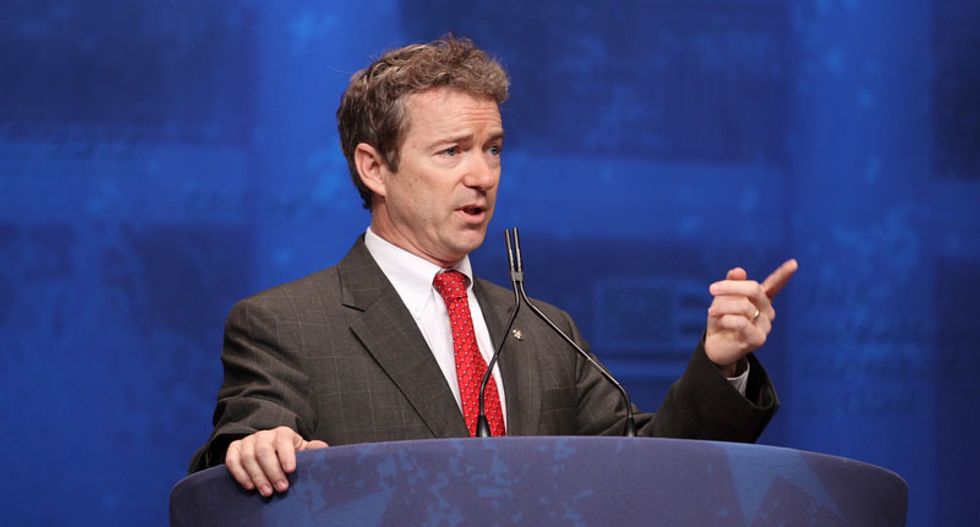 Looking over this collection of incidents where Rand Paul threw a tantrum because a mere reporter deigned to ask him a question---like it was their job or something---I realized that there's actually a pattern here. (Besides the fact that he gets even more upset with women than men.) It's the libertarian thing: Paul gets fussy and starts throwing his pacifiers any time someone prods him over what exactly he means by this "libertarian" thing. Whether it's when they're prodding to find out where his supposed libertarianism conflicts with the Republican Party platform or whether it's when they're exposing the hypocrisy of a "libertarian" who opposes abortion rights and legalized same-sex marriage, Paul gets angry and insists that their job is to simply glide over any of these friction points.

In other words, Paul wants his "libertarianism" to be a cipher. He wants you to believe he's a freedom-loving freedom freedomer, but doesn't want you to actually know what he means by that, but instead to just assume that whatever his views are, they must align exactly with yours. As a strategy, it's actually pretty smart. Paul wants younger, more independent voters to think he's a different kind of Republican but he also wants older, more religious voters to think he's the same kind of gay-hating, woman-suppressing Republican they prefer to vote for. Since "libertarian" is a meaningless garbage word, he's hoping that both camps just assume that his definition of it aligns with their views. But to keep that strategy going, he needs a conspiracy of silence: No questions on abortion/gay rights, since that might rob younger voters of the illusion that Paul's "libertarianism" means he believes the government should butt out of people's sex lives. No questions on foreign policy, because he's trying to convince Team Youth that he's anti-interventionist while simultaneously trying to convince Team Christian Right that he cannot wait to start killing Muslims. No questions on drug policy, anti-discrimination legislation, immigration, anything where a genuinely libertarian view would turn off older voters, but where admitting he's actually a conservative would turn off younger voters.

Looking at it from that perspective, it's arguable that Paul's tendency to fly off the handle, quit interviews, or demand imperiously that reporters act like stenographers instead of like, you know, reporters is all about trying to train the press to join his conspiracy of silence around all these issues. I mean, he may also just be a jackass, but the fact that this is targeted jackassery makes me wonder if this isn't just a deliberate strategy, with the hope that once reporters key into the fact that certain kinds of issues reliably cause a blow-up, that they will stop pressing those buttons for fear of inciting conflict.

If so, he's not just a jackass, but also a dumb ass. Nothing gets views and page clicks more than a candidate losing his temper. If anything, teaching the press that you can reliably get a tantrum by prodding him about hypocrisy or libertarian weirdness will encourage them to do it more. Of course, like Chris Christie, he may be banking on conservative enthusiasm for the idea that they are victimized by the meanie press refusing to be Republican propaganda corps. That might help him for a time, but at the end of the day, Republicans aren't so nuts that they'll try to win a national election on the false victimhood tip. They always end nominating someone who at least can act like a grown-up in public and Paul just ain't it.