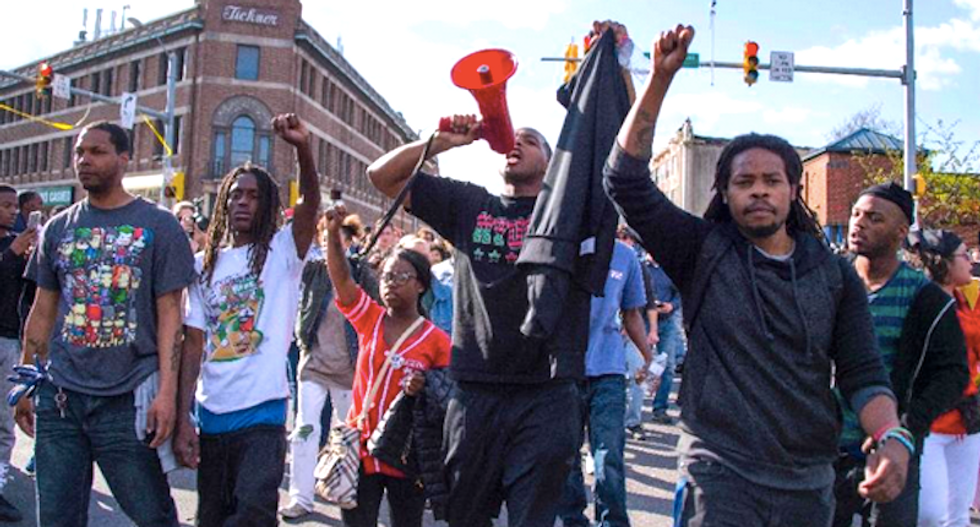 An alleged jihadist with the curious habit of speaking primarily to an American right-wing writer claims Islamic State extremists are trying to recruit “dissatisfied” blacks during the Baltimore riots.

“ISIS is taking advantage of racial tensions in the U.S. by attempting to recruit dissatisfied Muslims among the American black population,” reported World Net Daily.

The report Wednesday by WND staffer and talk radio host Aaron Klein is sourced to Abu Saqer, who is identified as the leader of the Gaza-based Islamist militant group Jihadiya Salafiya.

The claim has been picked up by other media outlets and promoted on conservative social media.

Saqer said he and other Islamists were encouraged by pro-ISIS T-shirts worn by protesters in Ferguson, Missouri – although Klein’s report makes clear the shirt was an ironic commentary on police brutality: “I rather get stopped by ISIS terrorist than Ferguson PD.”

Klein drew a link between those comments to the violent protests over the death of Freddie Gray, whose spine was severed while he was in police custody.

“It’s not the first report of ISIS viewing the racial protests in America as possible fertile recruiting grounds,” he wrote. “The protests in recent days have spread to Baltimore, where some protesters have turned violent.”

Klein previously quoted Saqer – who he identified at the time as an al-Qaeda operative – as threatening the U.S. in August 2013 that “Islam is coming and there is no other choice.”

The Jewish Free Press columnist has been quoting Saqer’s threats and boasts since at least 2007, when he reported that the “sheik” warned Christians living in Gaza to accept Islamic rule under Hamas.

He reported that Saqer offered vague confirmation that ISIS was taking advantage of “growing movement within the black community toward Islam and the racist policies of the U.S. government.”

Saqer could not confirm whether any “dissatisfied black Muslims” had been successfully recruited or whether “any such cells had been established,” Klein reported.

Klein then mentioned a November report about an ISIS pledge to send militants to fight police in Ferguson, although that has not happened.

He then reported that the FBI and TSA had warned in recent days of possible ISIS plots within the U.S., although Klein offered no evidence these alleged plots were tied to demonstrations in Baltimore or anywhere else.