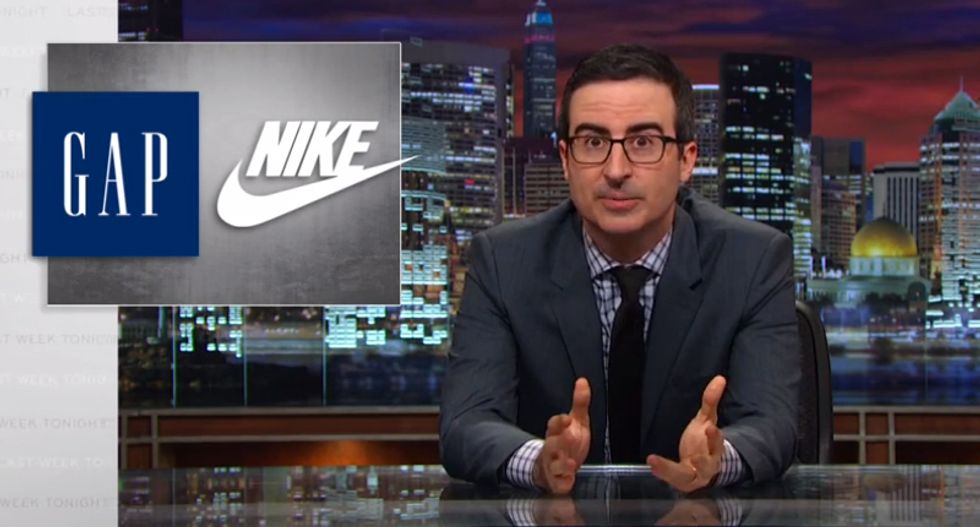 On HBO's Last Week Tonight, host John Oliver presented a devastating indictment of fashion industry CEO's who make millions of dollars in profits selling cheap clothes to American consumers, with both knowing fully well that those clothes are being made in overseas sweatshops by children.

Noting that studies show Americans on average buy 64 items of clothing per person per year, Oliver pointed out that fast fashion retailers like H&M, Zara, and Forever 21 entice consumers with cheap prices for low-quality disposable clothing.

According to Oliver, those prices allow “Midwestern tweens to dress like forty-something alcoholics attending the funeral of a Tel Aviv nightclub owner."

Oliver lamented the fact that the dirty secret that cheap overseas labor -- much of it performed by children in dangerous conditions --is no secret at all to consumers who want the latest trends at the lowest prices possible.

The host drew attention to a dress sold by billion-dollar retailer H&M that sold for the low low price of $4.95.

"Think about that, "Oliver explained. "That means you could take a five-dollar bill, scotch-tape it over your genitals, and you'd be wearing a more expensive piece of clothing."

While The Gap received special attention for their history of responding to bad publicity over manufacturing cheap clothes in dangerous conditions by promising, yet again, more oversight into labor conditions, all of the retailers who sell cheap garments came under his withering eye.

With the CEO's of multi-billion dollar corporations continually acting surprised at the horrific conditions their company's products are manufactured under, Oliver offered to give them a lesson in "labor chain management" by buying them lunch without full knowledge of where the food was purchased from or what exactly was in it.

Offering a smorgasbord of cheap sushi, dumplings, and rotisserie chickens, Oliver promised -- to the best of his knowledge -- that nobody had "spit on the food or rubbed their balls on it."

Watch the video below uploaded by Last Week Tonight: