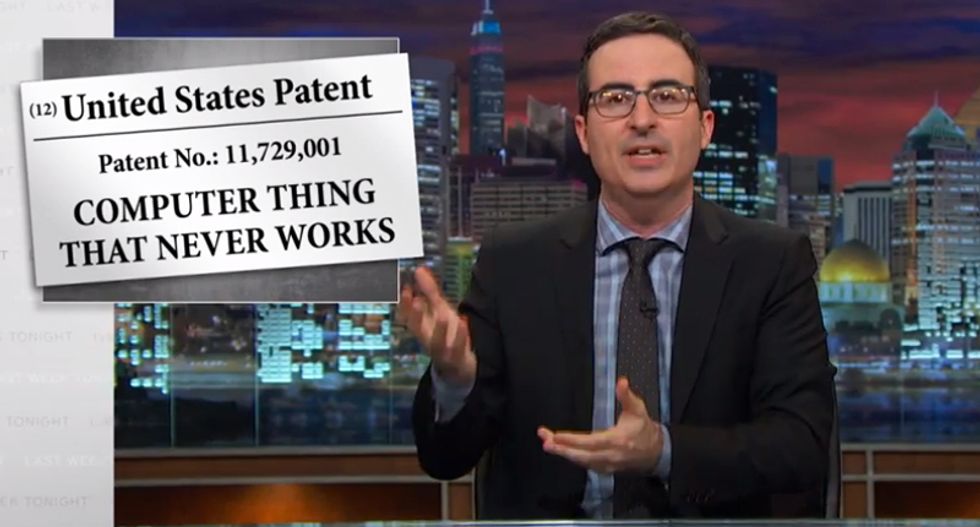 On HBO's Last Week Tonight, host John Oliver tore into so-called "patent trolls," companies that make a living purchasing patents and then suing "the living sh*t out of people" they accuse of infringing upon their intellectual property.

As Oliver explains, the U.S. Patent Office is supposed to certify inventions that are "new, useful, and non-obvious," with the host puckishly noting, "Incidentally, all the attributes Tom Cruise is seeking in a new mate."

Due to the way the system works, and with the advent of new technologies, patent trolls are able to sue businesses using those technologies even when it is a part of a third-party device.

In the case of one man who created a flight simulator program that can be used on Android devices, he found himself being sued for developing an app that uses the same platform used on all Android devices.

"This company, Uniloc, is essentially claiming it is entitled to piece of every Android app," Oliver explained. "That technically means they could show up at the offices of [hook-up site] Tinder and demand a cut of everything Tinder has created. Which, I assume, would be a pile of STD's, sad orgasms, and shards of human self-esteem. That's the business model"

According to Oliver, litigation by patent trolls has cost investors half of a trillion dollars since 1990, while at the same time, stifling innovation by people who don't want to get sued.

"Half of a trillion dollars, " Oliver said. "Let me out that in context. To lose other people that amount of money, Johnny Depp would have had to star in "The Lone Ranger" over a hundred times a year for twenty-five years. That's a horrifying amount."

Watch the video below from HBO's Last Week Tonight: