Jon Stewart: Santorum may not go to a gay wedding, but 'he'll be there on the wedding night' 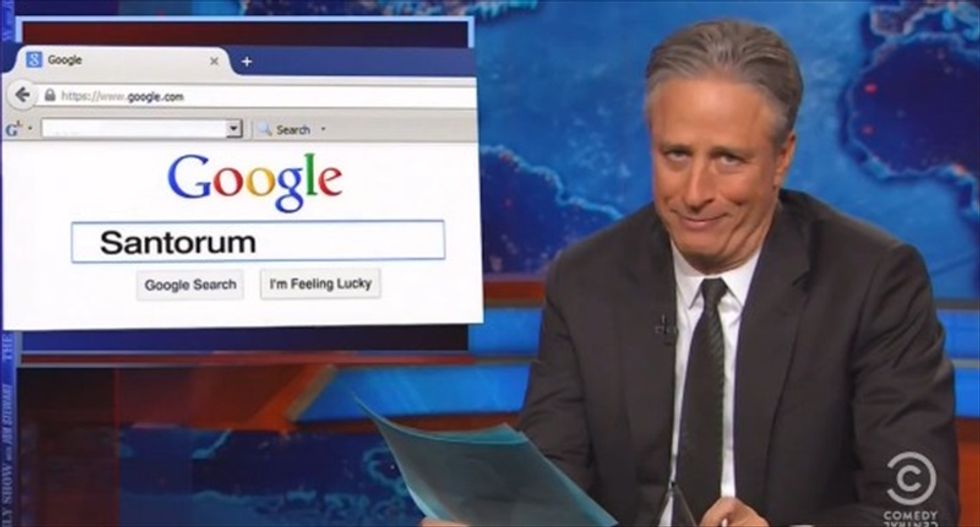 Daily Show host Jon Stewart roasted Rick Santorum on Tuesday after the former senator said he would not attend a loved one's same-sex wedding while still claiming he would "love and support" them.

Stewart immediately warned his audience, "Don't Google that -- you're gonna need a napkin and a paper towel."

In 2011, Stewart recalled, Santorum argued against marriage equality by comparing legalizing same-sex couples' right to be wed to referring to napkins as paper towels.

"Let me guess, in your scenario the paper towel is the gay guy," Stewart said. "Okay, how stereotypical can you get? Also, your analogy is stupid."

Overall, though, Stewart said the majority of Republican presidential hopefuls going into 2016 are being forced to answer tougher questions regarding their position on the issue than they were in 2012.

"If you can't handle these questions, how are you gonna handle [Vladimir] Putin asking you to go to a gay wedding?" Stewart demanded. "This election is gonna boil down to, 'Who do you trust to pick up the phone at 3 am and RSVP to a gay wedding?'"

Watch Stewart's commentary, as posted by Comedy Central on Tuesday, below.