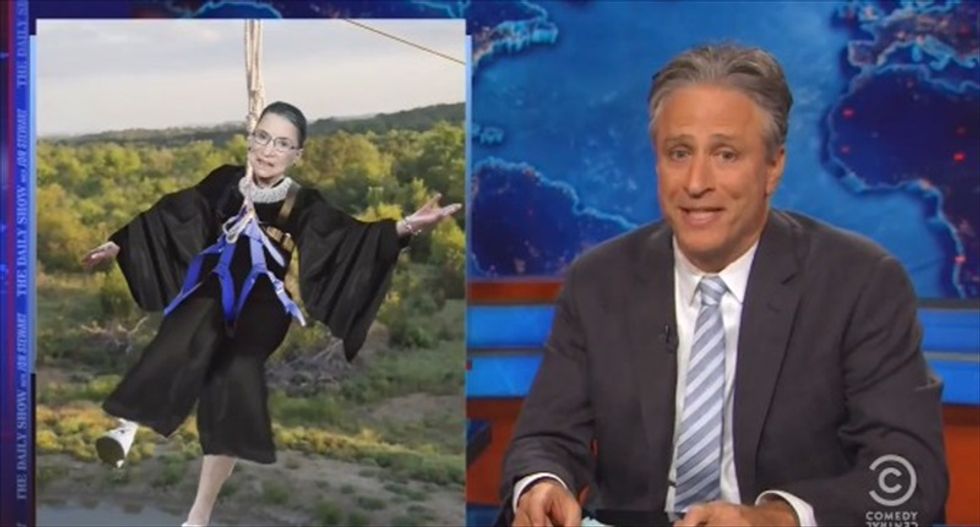 Jon Stewart threw his own oral arguments at both Chief Justice John Roberts and the "anti-gay cray-cray" contingent on Wednesday's Daily Show, puncturing the rhetoric the Supreme Court heard on Tuesday against same-sex marriages.

"The institution of marriage has almost never not been changing," Stewart said in response to Roberts. "Before the last century, marriage wasn't one man and one woman; it was one man and his piece of vagina property. Change can be good."

"Why should gay people have to account for anyone who's ever going to want to get married after they get the right to marry?" the host asked. "When women fought for suffrage, no one was like, 'What if one day a dog wants to vote, how 'bout that ladies?'"

The high court heard arguments on Tuesday concerning marriage equality bans in four states, with the case for the states being made by former solicitor general of Michigan John Bursch. Stewart poked fun at Bursch's youthful appearance while giving him a backhanded compliment for arguing that legalizing same-sex marriage could cause "long-term harms to our country and to our fundamental interest to govern themselves."

"First of all, let me just say I love your lawyer costume," Stewart joked. "Secondly, it takes balls for a young guy to walk into the Supreme Court and go, 'I know you guys think Marbury vs. Madison gives you the right to decide the constitutional questions, but I say we're a direct democracy. Now which one of you pr*cks is gonna buy me booze? I'm 19.'"