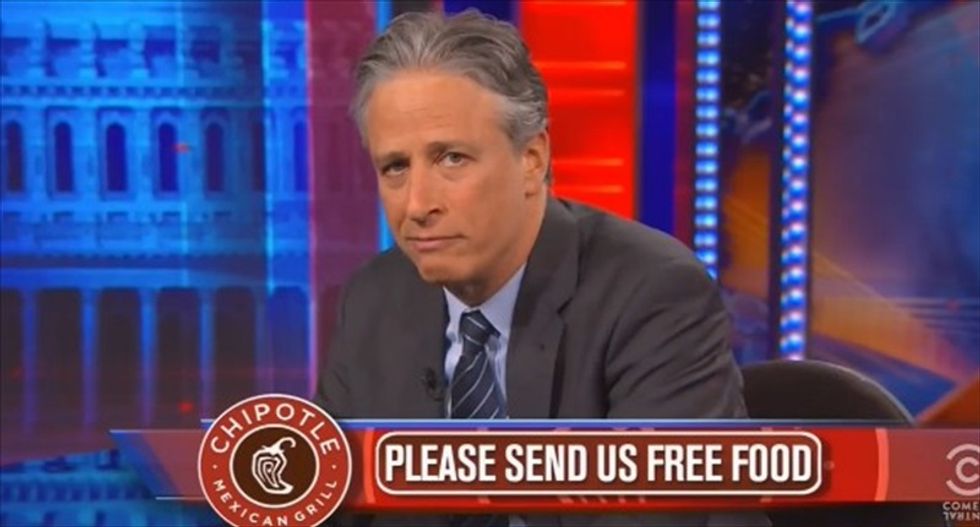 Daily Show host Jon Stewart noted on Tuesday that Sen. Marco Rubio (R-FL) looked somewhat pleased with himself for making a musical pun while announcing his candidacy for president, before pointing out that the joke was actually on the senator.

"Oh Marco, young padawan," Stewart said. "I know what it's like to have a joke so good you want to throw it out there, even though it's complete rubbish."

Stewart seemed to launch into an impersonation of Dennis Miller as he recounted how Rubio said on Monday that "our leaders put us at a disadvantage by taxing and borrowing and regulating like it's 1999," a reference to the Prince song "1999" that had Rubio smiling.

PolitiFact noted that Rubio's analogy was off, since the national budget was balanced under then-President Bill Clinton's administration that year. Stewart panned Rubio's comparison more strongly on Tuesday.

"Not only is the joke slightly lame, but it's a little inaccurate," the host said. "The American economy should be so lucky as to be like it was in 1999. The Clinton-era year was the peak of possibly the greatest peacetime boom in our history: budget surplus, low inflation, high employment."

Unfortunately for Rubio, Stewart observed, the only "important Latino political story" many news outlets cared about on Monday was former Secretary of State Hillary Clinton's visit to a Chipotle restaurant during her road trip to Iowa.

"How could Rubio have known that on the exact same day he was launching his candidacy, Hillary Clinton would eat lunch?" Stewart asked sarcastically.

As reporters pored over everything from Clinton's order to her sunglasses to how "relatable" the appearance made her seem, Stewart found himself wondering how CNN failed to go "full Malaysian airplane" on the story, with computer simulations and burrito analysis.

"It's gonna be a long f*cking election," Stewart lamented.