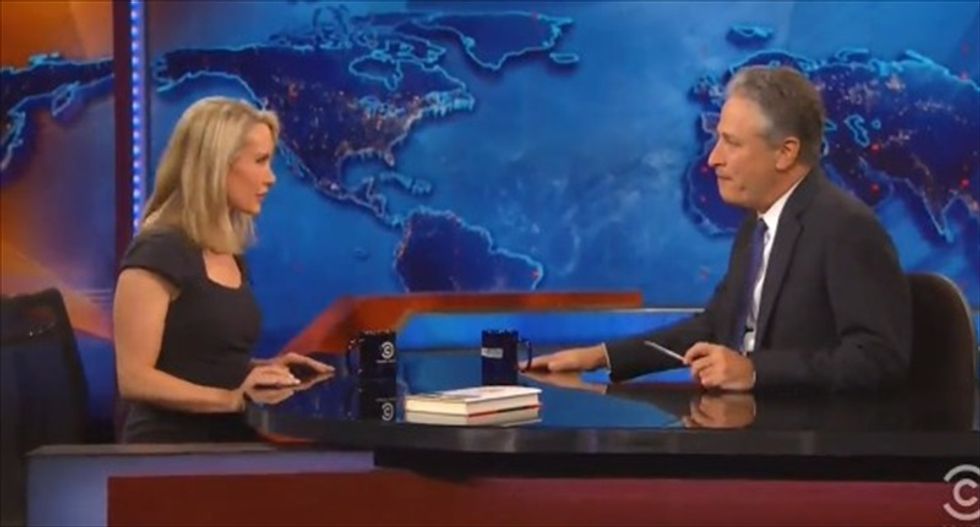 While Fox News' Dana Perino seemingly tried to act as a peacemaker between The Five and Jon Stewart's Daily Show on Wednesday, Stewart quickly put the kibosh on that idea.

"It's like Reeses peanut butter cups," Perino told him. "Maybe we could all get together here and have a mashup."

"I think of it more as a sh*t taco," Stewart countered. "I'm not saying who's who. I'm just saying it's not necessarily two great tastes that go great together. What do they do for food over there?"

"Not enough," she quickly replied.

Stewart also peppered the interview with sarcastic references to Perino's co-host Eric Bolling, calling him "the dumb guy" and eye-rolling when Perino told him that Bolling named his dog Freedom after the Freedom Tower in New York City.

"My dog's named Holocaust," Stewart countered. "I'm just saying, you want to have a dog tragedy-off, I think I've got that covered."

Perino, who appeared on the show to promote her new book, also asked Stewart whether he was a "pessimist-pessimist." Stewart replied by describing himself as an optimistic idealist.

"This is anguish. This isn't pessimism," he explained. "This is 'Come on, don't let a couple of a*sholes ruin the whole thing.'"

"We certainly give you a lot of material to work with," Perino told him.

"I do appreciate that," Stewart conceded. "Tell the dumb guy I said hi."