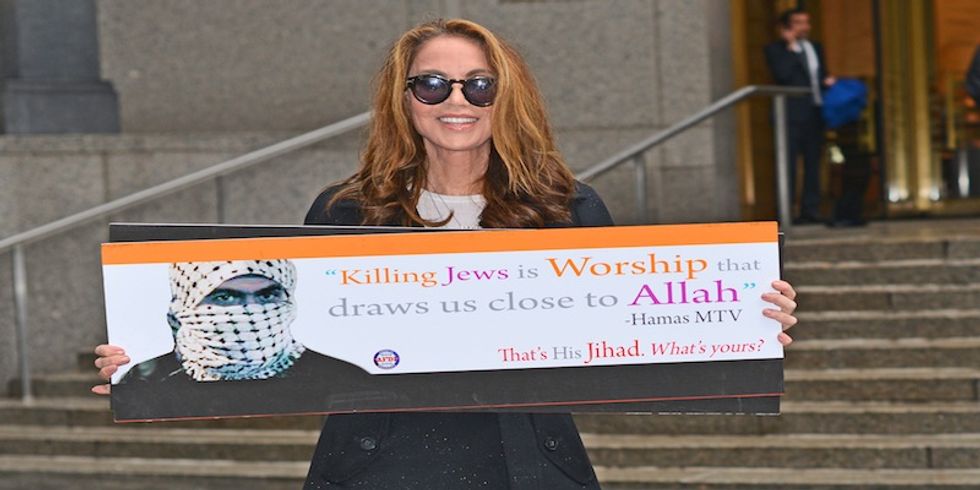 For some weird reason, New York's Metropolitan Transportation Authority (MTA) wasn't keen on running ads which read "Killing Jews is worship that draws us closer to Allah." But thanks to a judge's decision on Tuesday, these catchy anti-Semitic-seeming-but-actually-Islamophobic posters will be coming soon to a bus near you (if you live in New York)!

The ad in question was paid for by the American  Freedom Defense Initiative (AFDI), a so called "Pro-Israel" organization, which the Southern Poverty Law Center (SPLC) labels a hate group, lead by Pamela Geller, whom the SPLC calls, "the anti-Muslim movement's most flamboyant figurehead." You may remember Geller from her previous tasteless and hateful campaigns like the San Francisco bus signs which compared Muslims to Nazis and said “Stop the hate... End all U.S. aid to Islamic countries.” Or the Washington DC-based billboards which read, “In any war between the civilized man and the savage, support the civilized man. Support Israel. Defeat jihad.”

The poster designed for the New York state of mind features a man wearing a Palestinian keffiyeh who  is quoted as saying, “Killing Jews is Worship that draws us close to Allah." The ad attributes the quote to "Hamas MTV" and follows up with the killer (pun intended) tagline, “That's His Jihad. What's yours?”

The campaign attempts to parody the "MyJihad" campaign sponsored by the Council on American-Islamic Relations (CAIR), which sought to reclaim Islam from "Muslim and anti-Muslim extremists." Ironically, the MyJihad campaign itself was a response to the "savage" AFDI campaign.

The MTA declined to run the MyJihad ads, which is part of the reason they didn't want to run these ads and had asked for an injunction against AFDI. Not only are the ads Islamophobic but, ironically, they could easily function as anti-Semitic, since the otherwise powerful and stinging satire will be lost on all commuters who don't follow the hot and heavy AFDI vs CAIR transit-based-ad-campaign rivalry.

But Judge John Koeltl disagreed, determining that the MTA could not prove the ads would lead to violence that would outweigh the AFDI's freedom of speech. And, in one of my favorite sentences ever, Justice Koeltl wrote "the defendants have not presented any objective evidence that the Killing Jews advertisement would be likely to incite imminent violence."

It was a major victory for not just bigotry but for bigotry which is poorly expressed through confusing, obscure, inner-baseball advertising campaigns. (They are pretty meta, though. I'll give them that.) Not surprisingly, Geller praised the decision as a “triumph for liberty and truth.” Her lawyer, David Yerushalmi, who the Anti-Defamation League denounced for his "record of anti-Muslim, anti-immigrant and anti-black bigotry," was equally thrilled:

Judge Koeltl's well-written and considered opinion sends a loud and clear message to Islamic terrorists around the globe as well as to those government bureaucrats who believe that Sharia's blasphemy laws are an exception to the First Amendment. And that message is this: America's liberties will not give way to Islamic terror threats nor to government bureaucrats who are quick to cast aside our liberties for fear of offending Muslims.

One thing is for sure. That message comes through loud and clear to Geller and Yerushalmi.

'Pharma Bro' Martin Shkreli released to halfway house in US

So-called "Pharma bro" Martin Shkreli has been released from a Pennsylvania prison to a halfway house in New York state, the US Bureau of Prisons said Wednesday.

Shkreli, who became a poster child for predatory pharmaceutical pricing before being convicted of securities fraud in 2017, was transferred Wednesday from a low-security prison in Allenwood, Pennsylvania to undisclosed "community confinement" in New York state, said a BOP spokesperson in an email.