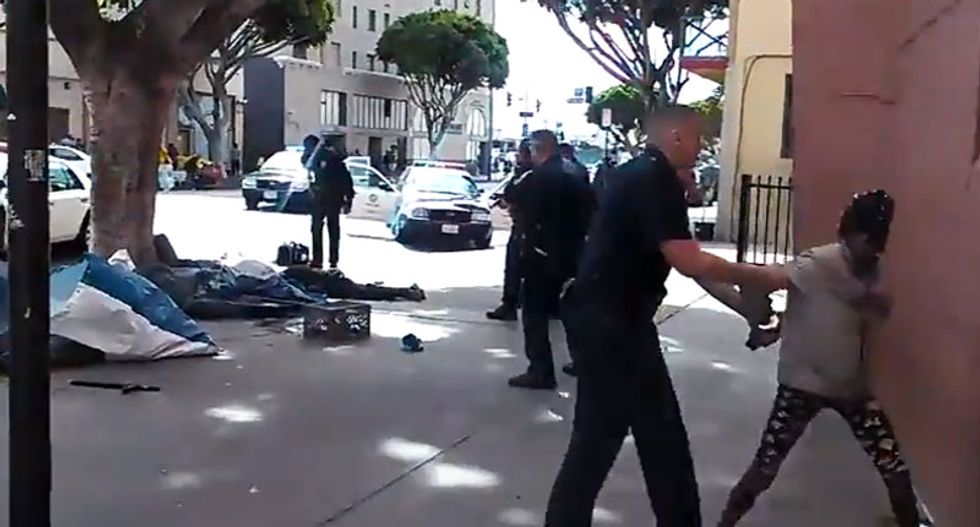 A  new report shows that more than half of the $100 million the city of Los Angeles spends on homelessness each year goes to the LAPD. Critics say this illustrates the city's priority on criminalizing the homeless instead of helping them, LA Times reports.

The LAPD arrested almost 15,000 homeless people in 2013 -- that's a whopping 14% of all of the department's arrests. Taxpayers footed the bill to the tune of somewhere between $46 million and $80 million.

Additionally, the report shows that approximately $6 million goes to fund the LAPD's mental evaluation unit that intervenes with people with mental illness. Another $6.7 million is allocated to the Safer Cities Initiative -- a team of 71 officers deployed on skid row who frequently interact with mentally ill people lingering on the sidewalk.

By contrast, the emergency response teams from the L.A. Homeless Services Authority, a city-county agency that deals with most of complains related to homelessness is supported by only $330,000 in city general fund money and is ill-equipped to respond adequately.

Homeless activists believe that the report reveals the city's lack of effectiveness and interest in reducing homelessness.

It "supports what we've been saying for years that this city is doing almost nothing to advance housing solutions but continues down the expensive and inhumane process of criminalization that only makes the problem worse," said Becky Dennison of Los Angeles Community Action Network -- a skid row advocacy group.

Rather than policing, the city should spend money on building affordable housing, according to Philip Mangano, president of the American Roundtable to Abolish Homelessness.