Man-babies grasp desperately at anything, no matter how silly, to discredit Joss Whedon 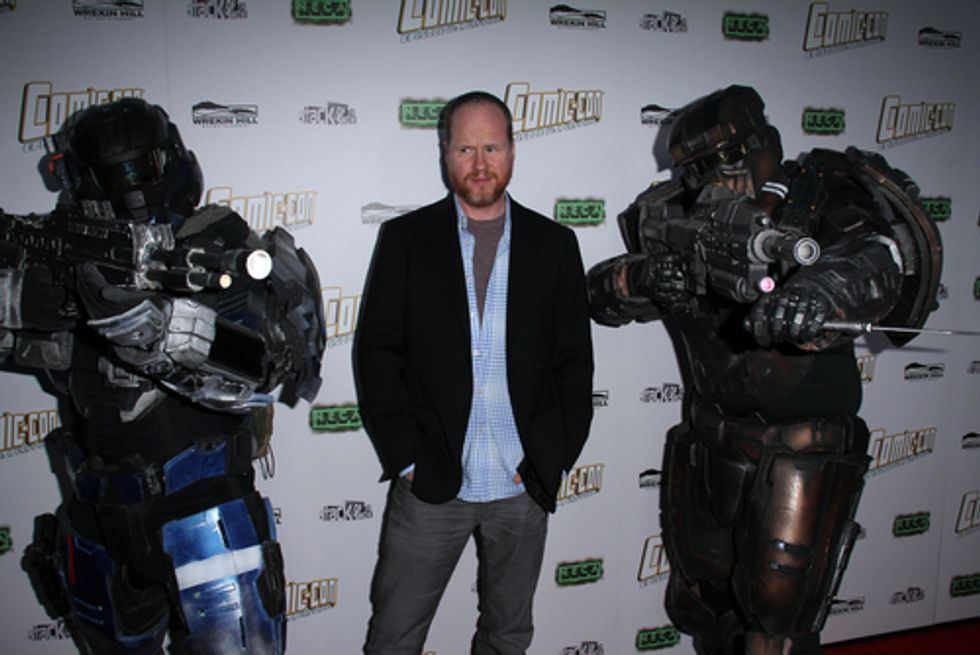 So Joss Whedon is being sued by this guy named Peter Gallagher, who claims that Whedon stole the idea of Cabin in the Woods from him. Joss Whedon is someone who believes that sexism is real and that sexism is wrong. Worse, for the man-babies (so much better a term, I think, than "men's rights activists"), Whedon actually puts his nutty belief that women are equal into action by casting women in the same cool action movie roles that man-babies prefer to be reserved for men. This is unacceptable, of course, because man-babies were under the impression that because male action heroes will do things like decimate a room full of bad guys that means they, by virtue of also having a penis, could do the same if called upon, a fantasy that is popped when a woman onscreen does the same thing and reminds the audience that it's really just a bunch of camera tricks and really, no one---male or female---can actually do that. Because of Whedon's opposition to sexism and his belief that women deserve power fantasies just the same as men, he's become a big enemy of the man-baby world, and so they are positively tumescent at the news that he's getting sued for plagiarism.

(This guy is someone who brags about being on multiple blockbots, for context.)

@josswhedon So ripping off other peoples work is okay but cheesy dialouge in Jurassic World annoys you ? http://t.co/oKNTw6NaTY #hypocrite
— thatnorwegianguy (@thatnorwegianguy)1429085902.0

(That's in reference to Whedon acknowledging that sexism is a thing that is real, something the man-babies cannot countenance.)

Of course, if you read the actual reporting on this, it becomes immediately obvious that this isn't a serious lawsuit.

Gallagher alleges that there are 25 similarities between his novel and the 2012 film, and that they are too close to be coincidental. The similarities include:

The full complaint is, if anything, even more pathetic. Gallagher alleges as one of the supposedly many similarities, "The setting of each work takes place in a remote cabin in the woods, where the prior inhabitants of the cabin were murdered." Which would mean, by his own standards, half the screenwriters for horror movies should be suing him from ripping the idea off of having teenagers murdered in a cabin in the woods. Same story with the complaint about the character "types" in the movie. The whole point of the movie is that these things are cliches. There's a lot of hilarious stretching, like, "The cabin in the book is referred to as the “Brinkley Cabin” and in the film it is the “Buckner Cabin.”" Literally, the only thing he can cling to at all is the argument that there's a third party watching, but while that's a novel twist, it's not exactly new---The Hunger Games and The Truman Show mine similar ideas.

Oh, but it gets a lot funnier:

The Little White Trip did not achieve any major success, as Gallagher self-published and distributed the book on his own. He believes that Whedon may have gotten a copy because Whedon lives in Santa Monica, CA, where Gallagher used to hawk the book on the sidewalk.

Yeah, no, that's a real stretch. He's not even alleging that he saw Whedon buy a copy, which, since he's trying to sell his book out of a box on the street, is what he would have seen should his theory have any merit. This is just a nuisance lawsuit to see if they can get a payoff to go away.

But what is really baffling about the man-baby excitement over this is how irrelevant this all is. Despite the tendency of conservatives to squawk "ad hominem" every time someone disagrees with them, they clearly don't understand that the  term actually means bringing up irrelevant attacks on a person's character instead of addressing the topic at hand. (A classic ad hominem against feminism, for instance, is that because the speaker claims he would not want to have sex with a woman, that means her pro-feminist argument is invalid.) This is textbook ad hominem. Even if Whedon did plagiarize some rando selling books out of a box--- which is very, very unlikely---how does that disprove his arguments about sexism? Do women deserve to have the same power fantasies onscreen as men any less because of this? Yeah, no.

Of course, in light of Gamergate and the Sad Puppies, it's clear that the argument is that it's impossible for someone to be feminist and talented. The argument is that a lot of talentless hacks are getting elevated because of their politics, which isn't true, but is used as a pretense to do things like the Sad Puppies campaign, which involves elevating people whose talent doesn't merit it to higher rankings because of their conservative politics. Obviously, the hope here is that this will be "proof" that Whedon was fooling everyone all along and he doesn't have actual talent and blah blah. The hope is this nuisance lawsuit will wipe out Buffy, Angel, Dollhouse, The Avengers, etc. and "prove" that a feminist can't be talented.

Yeah, it's pretty sad to see it. Days like this, I realize that despite the harassment and bullshit as anti-feminists dish out, especially in geek spaces, our side is going to come out on top, just by sheer non-patheticness.