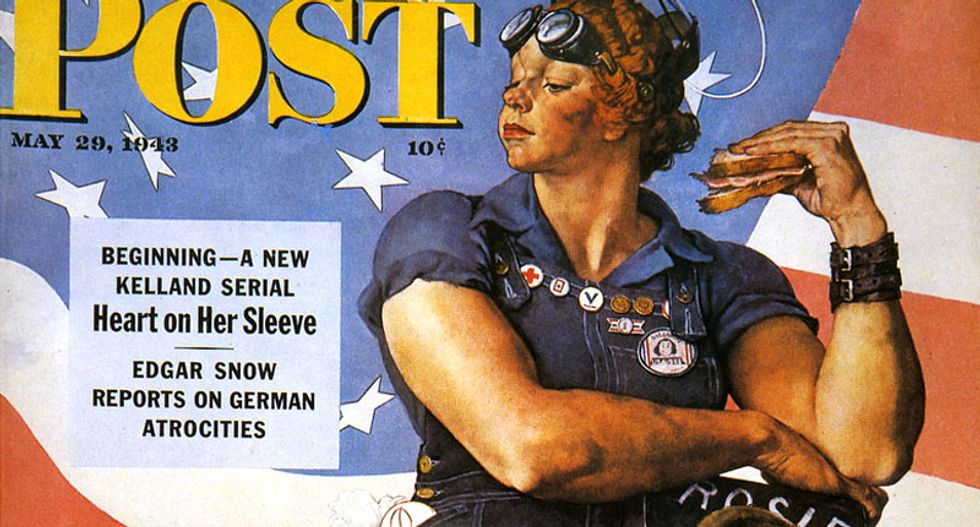 Rosie the Riveter as depicted by Norman Rockwell in 1943

Mary Doyle Keefe, known for modeling as "Rosie the Riveter" in the famed Norman Rockwell painting that came to symbolize women factory workers during World War II, has died, according to an obituary published by a local mortuary. She was 92.

Reuters could not immediately reach the family, but Keefe's daughter confirmed the death to the Associated Press on Wednesday.

The Norman Rockwell Museum said in a statement on Wednesday night that it was "saddened to learn of the passing of Mary Doyle Keefe," and sent condolences to her family.

The museum said Keefe was a neighbor of Rockwell's when the two lived in Arlington, Vermont. He called Keefe, then a 19-year-old telephone operator, to pose for the picture that appeared on the cover of the Saturday Evening Post in May 1943.

The fictional Rosie, depicted eating lunch in blue jean work overalls with a rivet gun in her lap and her feet resting on a copy of Adolf Hitler's manifesto "Mein Kampf," became a symbol of how the war opened doors for American women to enter factories and take on labor jobs previously reserved for men.

Her pose was modeled after Michelangelo's depiction of the Prophet Isaac on the ceiling of the Sistine Chapel, the museum said.

Rockwell later apologized for making the fictional Rosie's arms and shoulders much larger than Keefe's, according to the museum. It added that the original oil on canvas painting is part of the Crystal Bridges Museum of American Art's permanent collection in Bentonville, Arkansas.