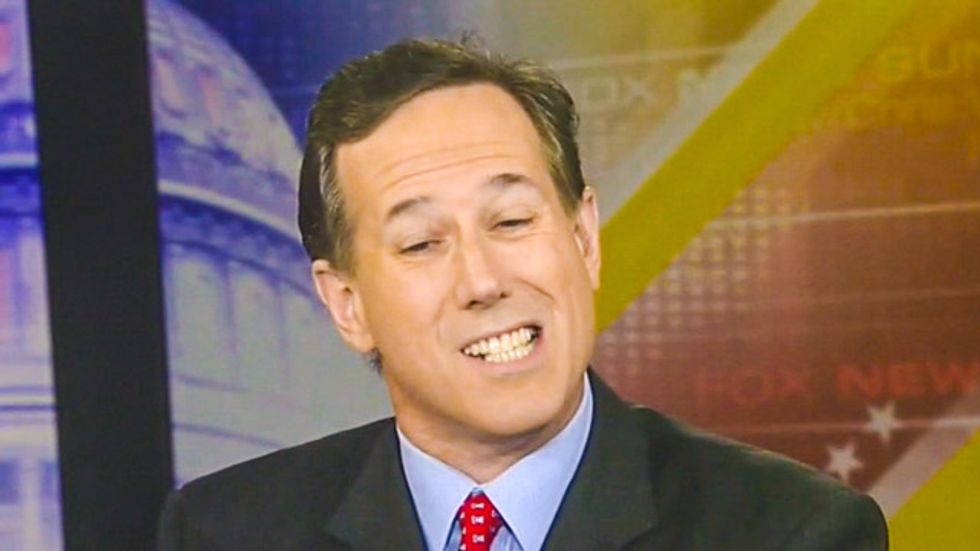 Rick Santorum, whose family name is an old Italian word describing the frothy mixture of lubricant and fecal matter that can be the byproduct of the butt-sexx (this is totally true, you can look it up on the Internet),  has some very strong opinions about gayness.

Santorum was on the radio (something old people listen to -- ask your grandparents)  with huge idiot and awful lawyer Hugh Hewitt today, talkin' 'bout gays and gay sex and things gays do when they are being gay and gaying up the whole damn gay place. Also: gay.

You know: guy talk. It's not all about the Cleveland Browns ... which is not a gay thing, I don't think, but I'm too afraid to go to urban dictionary and find out.

Anyway, after some idle chit-chat about how American gays should really back-burner that whole inconsequential "marriage equality" fiddle-dee-dee piffle-doop, focusing instead of glitter-bombing the filthy homo-hating Muslims back to the pre-Stonewall ages, Hugh got around to asking Santorum about gay marriage.

Surprisingly, his answer options were not "kill/fuck/marry," although we can guess which one he would pick.

"Let me ask you the question that was asked of Senator Rubio yesterday, " Hewitt said. "Would you, Rick Santorum, attend a same-sex wedding of a loved one, or a family friend, or anyone you were close to?"

Over the prison-gate sound of Santorum's sphincter slamming closed at the very idea that he might know a gay person, Santorum was all, 'nuh-uh, no way Jose,' and "No, I would not."

"No, I would not," he replied  -- just like I said he did in the previous sentence.

Hewitt replied, and I'm paraphrasing here, "What the f-u-c-k, dude. What up with that?"

Stuttering Ricky replied, " No, because, I just, I don't... As a person of my faith, that that would be something that would be a violation of my faith. I would love them and support them, uh, but I would not participate in that ceremony."

We will pause for a minute here as all gays and their loved ones, -- upon hearing that Rick Santorum will not be RSVP'ing their big gay wedding -- make sad faces like this right now: 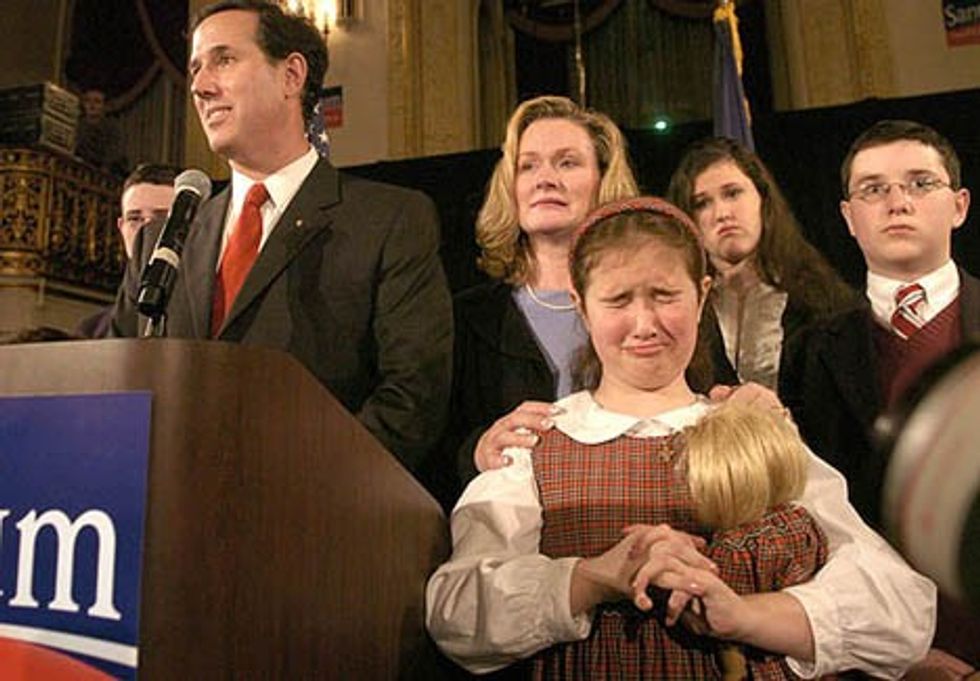 Particularly the ones of you living in Utah, because for some reason that makes us laugh with childish delight.

Rick Santorum will not be at your wedding no matter how much you beg and plead and promise that you'll have the DJ play that gawdawful Chicken Dance song which is the least gay thing on Earth... including Lindsey Graham.

Rick Santorum will not be at your wedding -- nor the wedding of at least one of his seven kids  if statistics hold true -- but it gets better.

You can still  have a fulfilling and loving married life just like the couple in the photo above  -- minus the crushing and humiliating defeat as an incumbent senator which, like, almost never happens -- filled with children and joy.