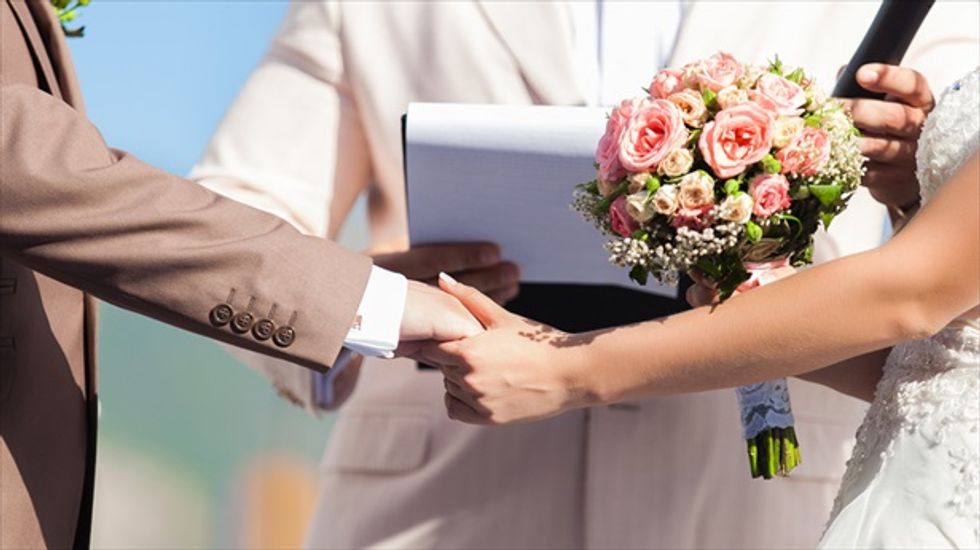 Always the bride, never the bridesmaid.

A New York City woman accused of being married to eight men at the same time pleaded not guilty in state court in the Bronx on Friday to two counts of felony fraud that prosecutors say stemmed from a scheme to gain U.S. citizenship for grooms from countries "red flagged" by the Department of Homeland Security.

After Liana Barrientos, 39, married men from Egypt, Turkey, Georgia and other countries, she tied the knot an eighth time with Pakistani man Rashid Rajput, the Bronx District Attorney's Office said.

Rajput was later deported to Pakistan in 2006 following an investigation into making threatening statements about the United States by the U.S. Immigration and Customs Enforcement (ICE) agency's Joint Terrorism Task Force.

ICE, part of the Department of Homeland Security, tags certain countries with red flags as part of efforts to prevent "illegal export of sensitive U.S. munitions and strategic technology" and protect "American technological accomplishment from adversaries," according to the State Department.

"Not guilty," said Barrientos, sporting a ring on her left hand and shaking her head as she faced a judge during her arraignment.

The blonde woman got married as many as six times in a single year, in 2002, according to the criminal complaint.

Assistant District Attorney Jessica Lupo said Barrientos is still married to four men. When investigators asked her about her marriage to husband Vakhtang Dzneladze of Georgia as he sought U.S. residency, Barrientos admitted "receiving money for those actions," Lupo said.

"When some of them were denied, they filed for divorce immediately and re-filed for their immigration status with other marriages," she said.

Barrientos was arrested last November after forms she filed in New York City in 2010 for a marriage license with Salle Keita from Mali raised suspicions. A District Attorney's Office investigator found a trove of marriage certificates tying her to multiple other husbands in various towns across New York state.

Barrientos had stated on the 2010 forms that Keita was her first and only husband, and that statement prompted the two felony counts of offering a false instrument for filing, each punishable by up to four years in prison if convicted.

(Editing by Ellen Wulfhorst, Barbara Goldberg and Will Dunham)

AUSTIN, Texas — Just a couple days after photos that show Dave Chappelle hanging out in Austin with other celebrities went viral, the legendary comedian has tested positive for COVID-19, leading to the cancellation of his upcoming comedy shows at Stubb's this week. A spokeswoman for Chappelle confirmed the positive coronavirus test results to The Associated Press, which reported the news on Friday, adding that the performer is asymptomatic currently. That means that Chappelle's residency at Stubbs, with shows set for Thursday-Sunday and Tuesday, have been called off. They're marked as canceled...