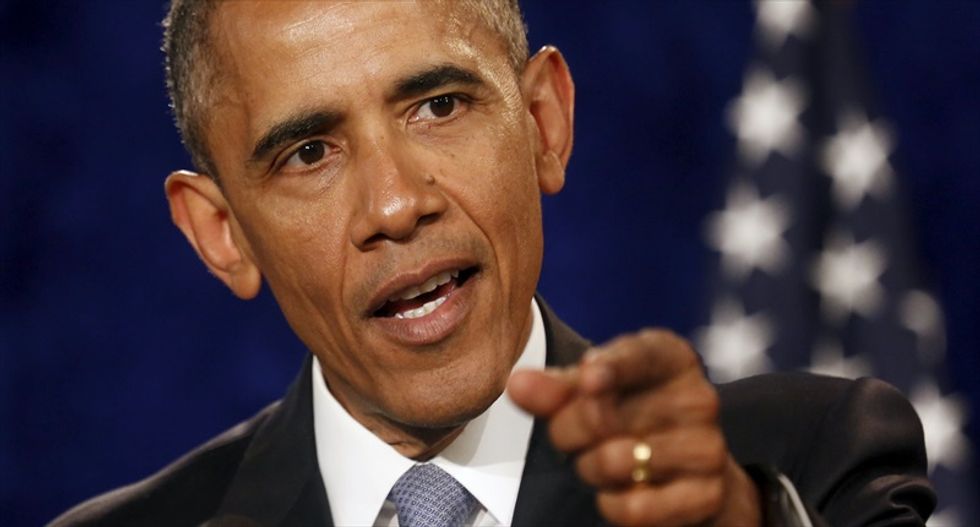 President Barack Obama delivers remarks at an Organizing for Action summit in Washington on April 23, 2015. Photo by Jonathan Ernst for Reuters.

President Barack Obama fought back on Thursday against the biggest domestic obstacle to the Pacific trade pact he wants to conclude before he leaves office: the trade skeptics in his own Democratic party.

Trade unions, environmental groups and high-profile Democrats like Senator Elizabeth Warren of Massachusetts have come out swinging against the Trans-Pacific Partnership, saying it would send American jobs overseas.

"When people say that this trade deal is bad for working families, they don't know what they're talking about," Obama told a group of about 200 volunteers and donors with Organizing for Action, an advocacy group formed by his former campaign team. "I take that personally. My entire presidency has been about helping working families.

"The Chamber of Commerce didn't elect me twice - working folks did," he said.

Obama argued it would be illogical for him to sign a trade deal that would hurt middle-class jobs given his efforts to expand health care insurance, bail out the auto industry and overhaul Wall Street regulations.

"I spent a lot of time and a lot of political capital to save the auto industry," Obama said, banging the lectern with a pointed finger for emphasis. "Why would I pass a deal that would be bad for U.S. auto workers?"

Obama is seeking fast-track authority from Congress to finalize the TPP deal, which would link a dozen economies and cover a third of global trade.

The Senate could vote on the fast-track legislation next week, but it may face a tough ride in the House of Representatives, where many Democrats oppose it.

Democratic opponents say the deal would cause a repeat of the factory closures and job losses seen after the North American Free Trade Agreement between the United States, Canada and Mexico was approved in 1993.

Obama said he understands the fears, but said the criticism was out of date, arguing the new deal will include strong protections for labor and the environment, and warning that a failure to pass it would cede economic power to China.

"You need to tell me what's wrong with this trade agreement, not one that was passed 25 years ago," he said, urging his supporters to spread the word.