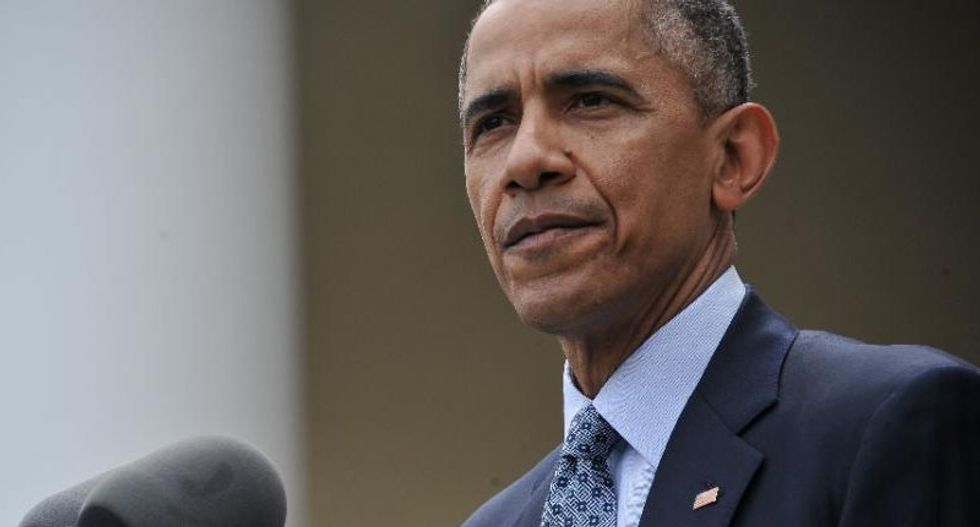 US President Barack Obama makes a statement at the White House in Washington, DC on April 2, 2015 after a deal was reached on Iran's nuclear program (AFP Photo/Nicholas Kamm)

One of the architects of Barack Obama’s legal rationale for drone strikes has called on the administration to release the full details behind the CIA’s decision to attack two sites in Pakistan, resulting in the accidental deaths of two hostages.

“I left the administration in January 2013 and know nothing about how this recent case unfolded,” Harold Koh, a former legal adviser to the State Department, said, “but yes, plainly, the Obama administration should release the factual record regarding the January 2015 strikes that killed two hostages.”

A controversial figure for his role in devising the US justification for the targeted killing of an American member of al-Qaida, Koh is now a law professor at New York University.

As Obama grapples with his role in the deaths revealed on Thursday of American Warren Weinstein and Italian Giovanni Lo Porto , both killed by drones in Pakistan this January, his administration faces renewed questions about “signature strikes” and what could be fundamental flaws in its legal justification for them.

The “factual record” Koh refers to could be the difference between legal strikes and violations of the administration’s rules or worse, said Christopher Swift, a professor of national security studies at Georgetown University.

Swift and many others agree the strikes appear legal. “This looks like it’s in the realm of a horrible mistake rather than the violations of the Geneva Conventions,” he said. “It’s not the platform; it’s whether it was unlawful killing.

“If it’s completely accidental as it appears then it’s a horrible tragedy, it’s not necessarily an unconstitutional undertaking. There’s no clear law that’s going to tell you right or wrong here.”

But he noted that it was exceedingly difficult to judge the legality of such strikes because of the secrecy surrounding operations. Obama has ordered the episode declassified, but Swift noted that “all the facts are subject to the CIA’s black highlighter.”

“We have hundreds of hours of surveillance prior to the strike and we have continuous surveillance in the days afterward,” he said. “It doesn’t look like the administration knew the particular identities of the people they were hitting, so to the extent there was a failure it seems less a matter of the legal justification as it is on the intelligence side.”

On Thursday the White House conceded it did not specifically know whom it had targeted in the “al-Qaida compounds” where US drones killed Weinstein and Lo Porto, as well as American-born militants Adam Gadahn and Ahmed Farouq and two others.

The admission suggests that “ signature strikes ” – lethal strikes launched without necessarily knowing who is in the crosshairs –haro have continued despite the president’s 2013 announcement that new rules would govern strikes . The order mandates that the CIA can authorize strikes only if it knows with “near certainty that the terrorist target” is present.

“Before any strike is taken, there must be near-certainty that no civilians will be killed or injured – the highest standard we can set,” Obama said in a 2013 speech.

A Guardian analysis of what drone strike data is available found that, although only 41 men were targeted between January 2006 and November 2014, an estimated 1,147 people had been killed by strikes. According to estimates by the Bureau of Investigative Journalism , 415 strikes have killed at minimum 2,500 people, 423 of whom were civilians, and at maximum nearly 4,000 people, including 962 civilians.

Koh has defended the administration’s standards in the past, saying in 2010 that “ our procedures and practices for identifying lawful targets are extremely robust ”. The administration follows rules of distinguishing between civilians and combatants “rigorously” and “in accordance with all applicable law”, he said.

In theory the rule should have curbed signature strikes, which by definition cannot justify the killing of a “high-value target” since they do not necessarily target a specific person. Instead the administration deems some people “associated forces” of al-Qaida targets by dint of their behavior or other details gleaned through surveillance – where they congregate, who they meet, etc – and it is here that facts become key.

“It’s the idea that anyone in al-Qaida is going to be caught up in the same circumstances [as its leaders],” said Mary Ellen O’Connell, a professor of international law at Notre Dame. “That they might in some point in the future be part of an attempt to attack the future.”

The CIA had “fallen back” to signature strikes, O’Connell said: “Not knowing who the people were they were killing doesn’t meet their own criteria of facts, and facts must be present to kill even under their own very loose set of rules.”

Another argument made by the Justice Department also raises lawyers’ hackles: that associated forces and high-value targets both constitute an “imminent threat” to the US. The administration laid out this argument in a 2013 white paper justifying the killing, without trial, of American al-Qaida leader Anwar al-Awlaki.

“The DOJ memorandum’s approach to imminence makes a mockery of the concept,” Swift said. “If you don’t have imminence, you’d have to show that you’d have due process,” he continued, adding that while the administration could have a legitimate due process procedure, secrecy clouds the process from public view.

A former chairwoman of the Use of Force Committee of the International Law Association, O’Connell takes issue with the entire scope of the drone program.

“They cobbled together its own set of international law rules” especially for the al-Awlaki case, she said. “They didn’t want to live in the real house of rules so they built their own house of cards, and now they’ve started to knock it down.”