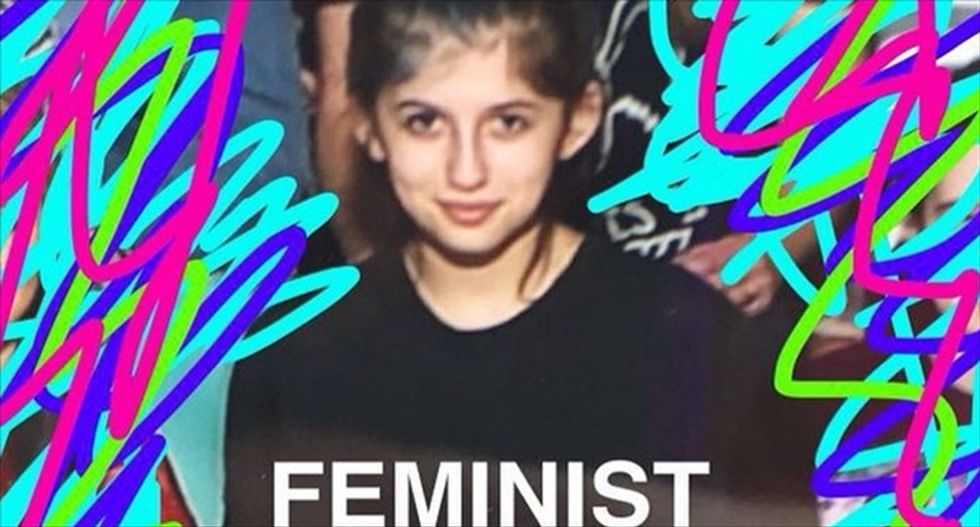 A middle school student in Batavia, Ohio won out over her school after officials deleted the word "feminist" from the shirt she wore for her class photo, Women You Should Know reported.

The girl, identified by her mother as Sophie, had worn the shirt to class at Clermont Northeastern Middle School on several occasions without a problem, including the day the photo was taken. But Sophie noticed the redaction after getting a copy of the picture. The school's principal, Kendra Young, allegedly told Sophie that she "made the decision to black it out because some people might find it offensive" after being notified by the photographer.

Young later told WXIX-TV that she had the photo changed to avoid any "unintended controversies," while acknowledging that it did not break the school's dress code.

According to MSNBC, Sophie invited other students to join her in a protest on Friday. She said in an Instagram post:

EVERYONE PARTICIPATING WILL BE WEARING A SHIRT WITH A PHRASE LIKE "I DESERVE FREEDOM OF EXPRESSION" OR "FEMINISM ISN'T OFFENSIVE" OR ANYTHING THAT YOU BELIEVE FITS! PLEASE MAKE A SHIRT AND JOIN US AND HELP TAKE CARE OF THIS ISSUE.

The post can be seen in its entirety below:

HELLO EVERYBODY! I UNDERSTAND THAT THIS PICTURE ISN'T GREAT, BUT THERE IS AN ISSUE AT HAND. I WORE A SHIRT WITH THE WORD "FEMINIST" ON IT. OUR SCHOOL TOOK A PICTURE OF OUR GRADE TO HANG UP IN THE SCHOOL. TODAY, I FOUND OUT THEY BLACKED OUT MY SHIRT. I WENT TO OUR PRINCIPAL AND SHE CLAIMED IT WAS "OFFENSIVE" AND SHE "DIDN'T WANT IT IN THE PHOTO" THIS FRIDAY, APRIL 17TH 2015, IS THE DAY MY PROTEST TAKES PLACE. EVERYONE PARTICIPATING WILL BE WEARING A SHIRT WITH A PHRASE LIKE "I DESERVE FREEDOM OF EXPRESSION" OR "FEMINISM ISN'T OFFENSIVE" OR ANYTHING THAT YOU BELIEVE FITS! PLEASE MAKE A SHIRT AND JOIN US AND HELP TAKE CARE OF THIS ISSUE. PLEASE REPOST AND SPREAD EVERYWHERE USING THE HASHTAG #IDESERVEFREEDOMOFEXPRESSION THANK YOU!

However, the girl's mother --who also identified herself solely by her first name, Christine -- said on Wednesday that Young apologized to her after local reporters contacted her about the shirt.

"She asked me if we were good?" Christine told Women You Should Know. "I told her she needed to apologize to Sophie and ask her that question. She seemed dumbfounded by that. So she called Sophie down to the office."

When Young apologized to her daughter, Christine said, she also asked her, "What do you want from this?"

"I want everyone to realize that we need feminism," the girl reportedly replied. "I want you to have someone come into the school and educate everyone about feminism. I want us to go to the news station together and show the people that we are working together the make this school and our community and better place for everyone. I don't think that's too much to ask."

WXIX reported that the school will offer a copy of the original version of the photo to Sophie, while also preparing to hold larger discussions with students regarding feminism.