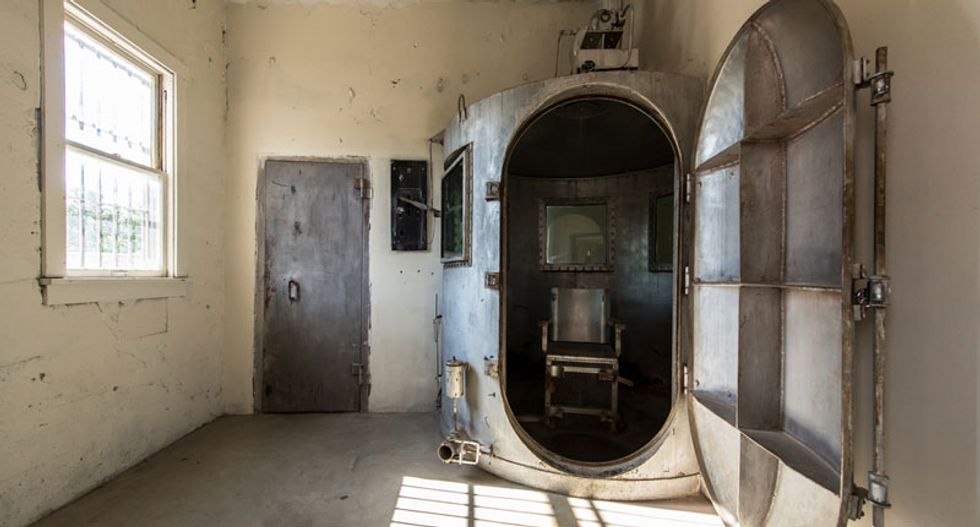 Oklahoma may use nitrogen gas as an alternative execution method if the U.S. Supreme Court finds the state's lethal injection process unconstitutional or drugs are unavailable, under a bill Oklahoma Governor Mary Fallin signed on Friday.

Oklahoma's adoption of nitrogen gas follows Utah's decision in March to reauthorize the use of firing squads for executions if lethal drugs are not available.

Fallin, a Republican, said she supports capital punishment and believes executions must be performed effectively and without cruelty.

"The bill I signed today gives the state of Oklahoma another death penalty option that meets that standard," Fallin said in a statement.

Oklahoma's three-drug method of capital punishment has been under scrutiny since a flawed execution last year in which an inmate's intravenous line was improperly placed by death chamber staff.

Clayton Lockett could be seen twisting on the gurney in the April 2014 execution. The execution was halted, but Lockett died about 45 minutes after it had started due to a buildup of lethal injection chemicals in his tissue.

The U.S. Supreme Court is due to consider on April 29 whether Oklahoma's use of a sedative called midazolam violates the U.S. Constitution's ban on cruel and unusual punishment.

The inmates challenging Oklahoma's lethal injection process say the sedative does not achieve the level of unconsciousness required for surgery, making it unsuitable for executions.

If the lethal injection method is not available, nitrogen hypoxia becomes Oklahoma's second method of execution under the bill signed on Friday, followed by the electric chair, and a firing squad as the fourth alternative.

No other state has adopted nitrogen gas as a method of execution. It would require an inmate to be placed in a sealed chamber or wear a special mask. The process would involve slowly replacing oxygen with nitrogen.

Republican state Representative Mike Christian, the bill's author, has said the process would be painless for inmates and affordable for Oklahoma. Nitrogen hypoxia causes a quick loss of consciousness, followed by death from lack of oxygen.

Oklahoma state senators approved the nitrogen alternative without opposition in April, and state representatives had voted in March to add the method.