On the hunt for the presidency, Jeb Bush adopts a 'caveman' diet 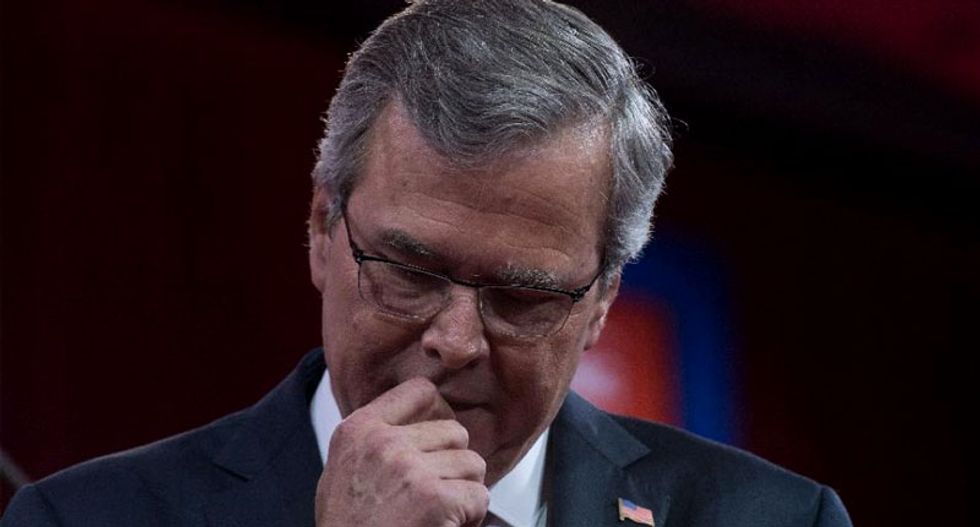 Jeb Bush is eating like a caveman, and he has literally shrunk in size.

The former Florida governor, expected to seek the Republican presidential nomination in 2016, is on the popular Paleo diet, which is based on what are believed to be the eating habits of the Paleolithic hunters and gatherers.

For Paleo practitioners, lean meat and fruits and vegetables are in and processed foods, dairy products and sugary delights are out.

For Bush, the results have been noticeable. Late last year he was something of a pudgy doughboy with a full face and soft jawline. Today the 6-foot, 4-inch-tall Bush sports a more chiseled look. His campaign-in-waiting would not say how much he had lost, but he looks to have shed 20 or 30 pounds.

Bush, who associates say has been dining on grilled chicken and salad while snacking on nuts and also exercising, is hardly the first politician to aim for a leaner look ahead of an expected campaign.

Politicians entering a presidential campaign often decide to lose a few pounds to project a more vigorous image. Usually when they do so it means they are seriously considering a candidacy.

Bush's friends have noticed the weight loss and are envious.

"Like a lot of us, Jeb has struggled with his weight at times. I'm slightly irritated that I seem to have found every pound he's lost," said Bush friend Ana Navarro, a Miami-based Republican strategist.

Some nutritionists are opposed to Paleo since it involves eating a lot of meat, which could lead to a higher consumption of fat since many high-protein foods have higher fat levels than carbohydrates. Bush is not known to consult a nutritionist about the diet, and his team declined to answer questions about criticisms of it.

"It's just a fad, there's no magic to it," said Dr. Christopher Ochner, a weight loss and nutrition expert at The Mount Sinai Hospital in New York. "If you called it something else and just ate more lean protein and fresh fruits you would lose weight."

Ochner said there are "other more well balanced, less faddish diets out there."

But Loren Cordain, one of the people who popularized the diet, defended Paleo as a "lifetime program of eating."

"More power to him," Cordain said of Bush.

"Paleo is all about health and well being for all of us," said Cordain, who is professor emeritus at the Department of Health and Exercise Science at Colorado State University.

It is unclear how well Bush, 62, can stick to the diet given the various tempting delicacies that pop up on the campaign trail during long, stressful days.

There's the tantalizing fried Snickers candy bar that is a staple of the Iowa State Fair, Kringle pastries in Wisconsin, the jelly-filled "pazcki" doughnuts of Michigan. And there is pretty much a slice of pizza everywhere you go.

"When you go to a diner or a coffee shop, you'd be surprised how often patrons will offer you a doughnut, a piece of pie, something that is deep-fried, has sugar on it," said Kevin Madden, who was a frequent flyer as a senior adviser to 2012 Republican nominee Mitt Romney.

"At the Iowa State Fair, everything is deep-fried and on a stick. It's hard to resist," Madden said.

Bush has been known to stray on occasion from the diet. Sometimes in the evenings he'll have a glass of wine, which is not Paleo compliant.

Just last week at a "politics and pies" event in New Hampshire, suddenly he was holding a plate with a slice of blueberry pie on it.

"To hell with the diet," he said as he dove in. "Where are the french fries?"

Faced with a heaping pile of scrambled eggs, hash browns and pancakes at a recent breakfast in Colorado, Bush snatched up the single slice of bacon on the plate and skipped the rest.

"He would be better off replacing the high-salt bacon with a grass-produced pork chop," Cordain said.

Those around Bush find themselves eating the Paleo way when they're with him because quite often that's all that is available.

Dr. Staffan Lindeberg of the University of Lund in Sweden has done several studies of the Paleo diet. He said people report that they were satisfied after eating fewer calories than on a standard diet.

But often, he said, Paleo dieters underestimate how many calories they’ve consumed so they might feel hungry again sooner than otherwise and need to eat again.

"I tell my patients they need to beware of that: If they start feeling hungry between meals and there are no healthy foods available, they might reach for the junk food," he said.