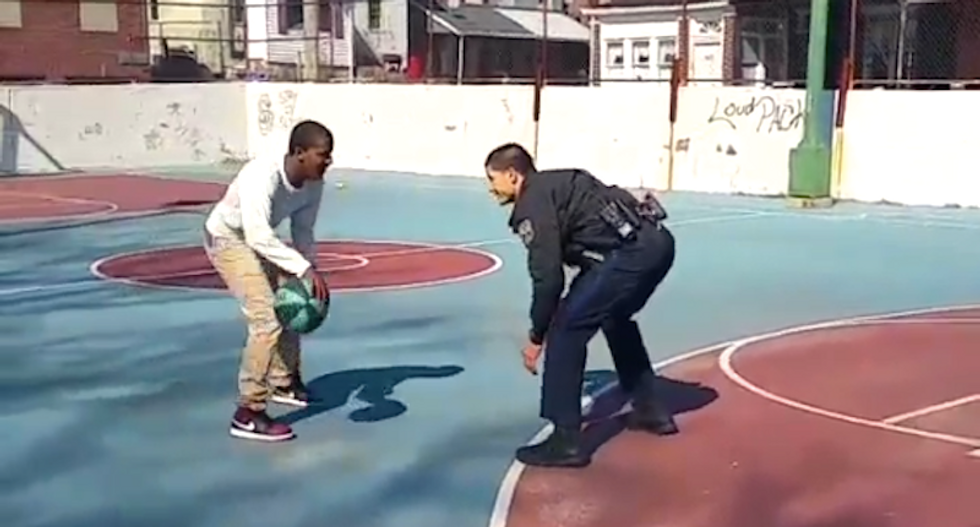 A black junior college basketball player said he was briefly detained by two Philadelphia police officers he embarrassed during a pickup basketball game.

Samir Hill, a 5-foot-7 point guard at Allegany College of Maryland, was playing against some neighborhood kids when the officers approached, reported Complex.

The 21-year-old Hill said the officers joked that they didn’t look very good and “started talking trash” – so he challenged them to a game.

“We gave them ball first, (and) I was playing on the court two-on-two with my friend Josh — they almost scored on him,” Hill said, as his friend loudly protested in the background. “We get the ball, and everybody starts pulling out their cameras. The first cop, I crossed him and laid it up.”

“He’s like, ‘I don’t play basketball, I play football,’” Hill said. “So he put his partner on me — the second one, the one I made fall. Everyone went crazy.”

Hill never learned the officers’ names, but he said they tried to arrest him two days later, after pro athletes -- including former NFL star Chad Johnson -- shared the video clips on social media.

“I think it was because of the video, but they said it was the people I was around,” Hill said. “I don’t think it was that though, because most of the kids I hang around are college kids. I think they just wanted to take me down to the district to show who I was.”

He said the officers took him to the police station saying they thought they saw him with contraband, but they eventually let him go without charge.

“They didn’t explain it to me,” Hill said. “They just took me in there, handcuffed me to a bench for an hour and a half. They were doing a search on the car. They searched the car for like an hour. They didn’t find nothing, and they let me go. The whole time they were telling me how they weren’t going to lock me up, that they were targeting my friend.”

He said the officers told him they would come back the next day in basketball gear for a rematch, but he said the pair never showed.