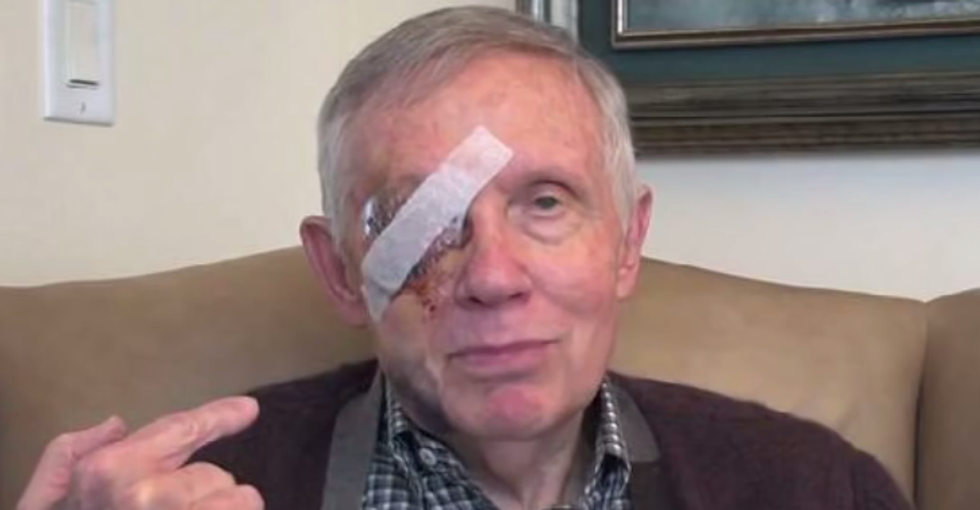 Rush Limbaugh, Glenn Beck, Breitbart, and Laura Ingraham all reported this month on the rumor that Larry Reid got drunk on New Year's Eve and beat up his senator brother Harry, then showed up intoxicated to an Alcoholics Anonymous meeting with an injured hand and relayed that he had just assaulted a family member.

According to a 50-year-old veteran of the Vegas nightclub industry, however, Larry Reid did no such thing. Rather, Larry Pfeifer, former party promoter, made the whole story up and fed it to a right-wing blogger in a scheme to discredit the blogger's reporting. The blogger, John Hinderaker, then published Pfeifer's version of events, launching the conspiracy that -- though Senator Harry Reid (D-NV) says he hurt his face exercising with an elastic resistance band in his bathroom at home -- Reid is lying to the American public to protect his brother's reputation.

Using the pseudonym Easton Elliott, Pfeifer pitched Hinderaker his Reid assault story in response to the blogger's assertion that Reid's facial injuries were inflicted by the mob.

On April 3, Hinderaker posted the following on Power Line, a conservative news site: "Someone attacked Harry Reid on New Year’s Eve or New Year’s Day; that much seems clear from photographs and from the nature of his injuries. So far, to my knowledge, no one has investigated to try to find out what really happened. My 'investigation' consisted of answering my telephone. Perhaps those reporters who were so eager to dig through Sarah Palin’s dumpster and track down Mitt Romney’s high school classmates will now swing into action, carry out an actual investigation, and either confirm or refute the events described by Mr. Elliott."

“I thought the whole thing would be over in a day and a half,” Pfeifer tells the Las Vegas Sun. “I wasn’t after 15 minutes of fame. I wanted a platform where I could present this as what it was and 2 million people would pick up on it.”

Hinderaker made an attempt to verify Pfeifer's story in an email inquiry to Adam Jentleson, Reid's communications director. Jentleson's entire reply to Hinderaker was: "Don't ever change."

Skeptical that the senator had hurt himself exercising in the bathroom, Breitbart unearthed a photograph of Senator Reid's master bathroom, and sent it in an email to Reid’s staff asking them to explain in detail how the Senator’s injuries were consistent with the physical layout captured in the picture. Staffers didn’t reply to Breitbart’s request.

“I would really like to apologize to Harry Reid and his brother. What I did was (expletive) up,” Pfeifer tells the Las Vegas Sun about the media explosion he caused by lying to a blogger a few weeks ago.

Pfeifer points out he deliberately added points to his story that would be easy to identify as false. Larry Reid couldn't have possibly shown up drunk to an AA meeting on New Years Eve, for example; it would be against AA policy for the organization to let Reid in.

What's more, when he leaked the information to reporters, Pfeifer used a false name. But many of them didn't bother to verify his identity.

In contrast, the Las Vegas Sun "demanded that Pfeifer reveal his legal name and show his driver’s license, then ran a public records check on him to verify his identity."

“Why are people so bloodthirsty?” Pfeifer muses to Sun reporters. “We’re all supposed to be good neighbors. Harry Reid’s a human being. If a complete stranger we knew was injured, wouldn’t we be concerned?"