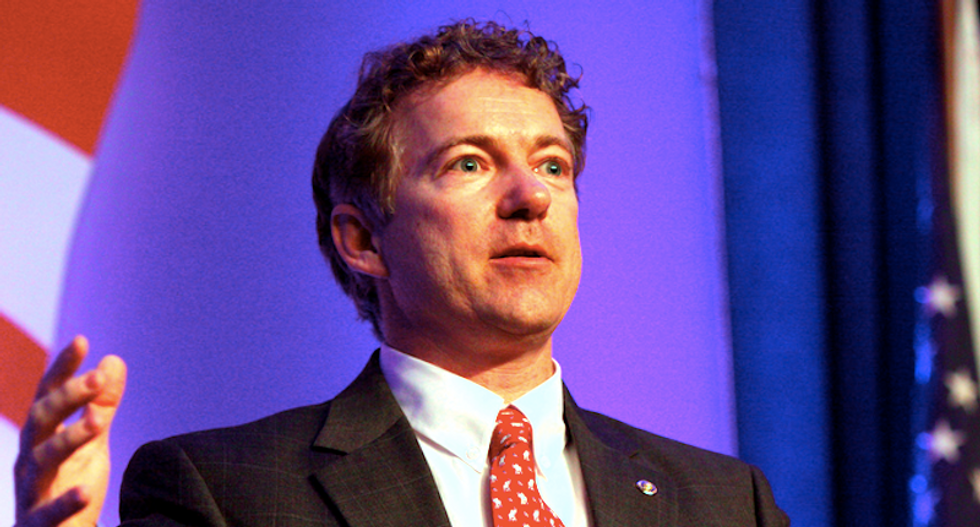 Rand Paul on Saturday attacked Hillary Clinton, the only declared Democratic candidate for president so far, over her record as secretary of state under Barack Obama, her use of a private email server while in that job and the human rights records of some donors to her charitable foundation.

The Kentucky senator also asked Republicans to help him take the party’s message to “new people… rich, poor, black, white, brown” as he campaigns for the presidential nomination in 2016.

Speaking in Nashua, New Hampshire, at the Republican Leadership Summit – where most of the declared and potential GOP candidates for president were scheduled to speak on Friday and Saturday – the libertarian-tinged candidate largely focused on foreign policy, an area in which he has been vulnerable to attack over his supposedly isolationist stance.

He named radical Islam as the enemy of the US and focused again on the Benghazi attacks of 2012 and Clinton’s role in the US response.

“Libya was a mistake,” he said, referring the Obama administration’s military support of rebels who toppled Muammar Gaddafi in 2011. “One thing that is probably true in the Middle East, every time we have toppled a secular dictator, a secular strong man, we’ve gotten chaos and the rise of radical Islam. If we want to defend our country we have to know the enemy and we have to name the enemy.

“The president won’t name the enemy but I will: it’s radical Islam. Until we name it we can’t defeat them, and I will tell you this: if I were commander in chief I would do everything it takes to … defend the country against radical Islam.”

Paul also emphasised his supposed appeal to a wider section of the populace than most Republicans, particularly on social issues like sentencing laws and the legal status of some drugs.

Not for the first time , he invoked an unlikely inspiration: Robert Henri , the founder of the early 20th-century Ashcan school of American social-realist painting.

“…I like to think of the image of Robert Henri, who said to young painters, ‘Paint like a man coming over the hill singing’. I think if we proclaim our message with the passion of Patrick [sic] Henri … then I think we’ll be the dominant party again.”

Opening up to questions from the audience – “We have time for two or three questions as long as they’re easy questions,” said the senator, who has had a number of tricky interactions with the media since announcing his run for the White House last week – Paul was asked whether he thought the Massachusetts senator Elizabeth Warren , who has repeatedly said she will not run for president despite appeals from the left, would become Clinton’s running mate.

“I’m starting to worry that when Hillary Clinton travels there’s going to need to be two planes,” he said. “One for her entourage and one for her baggage. And the plane for the baggage is really getting heavy.

“The whole email thing,” he continued, in reference to Clinton’s contentious use of a private email server while secretary of state , “is she sort of above the rules? She doesn’t have to use a government server? ‘My server was protected by the secret service’ – does she think there’s like floppy disks in her basement? I think there’s a lot more going on, there’s more coming.”

Paul also repeated a common attack line, mentioning donations made to the Clinton Foundation , which is run by the candidate, her husband former President Bill Clinton and their daughter, Chelsea, by countries with questionable records on women’s rights .

“Do you know a woman was gang raped by seven men in Saudi Arabia and they arrested the woman?” Paul asked. “Probably gave her 90 lashes for being in a car with an unmarried man.

“Does anyone remember South Africa and apartheid and how everybody rose up and people quit investing? You’d think she’d be leading a disinvestment programme against Saudi Arabia, instead of taking their money.”