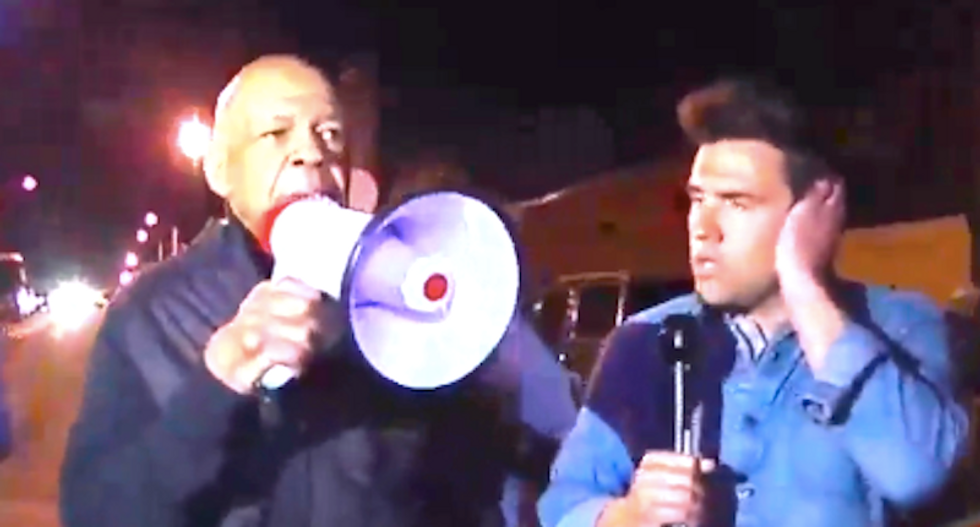 A Maryland Democrat ignored Sean Hannity to help clear the streets of protesters at curfew in Baltimore.

Hannity, back in the studio, then asked to speak with the congressman, who blew off the request and picked up a bullhorn to urge protesters to go home.

The Fox News host managed to get one question to Cummings through Vittert, who followed the lawmaker.

Hannity asked if the president had rushed to judgment in the case, and Cummings said he did not believe so.

Cummings told Fox News that he and Maryland’s congressional delegation had spoken with the Department of Justice and were confident the case would be fully investigated.

“The president lashed out at police?” Hannity asked, back in the studio. “The president is sending two White House representatives.”

Cummings ignored Hannity and called for protesters to obey the curfew.

“Excuse me, I want you to help get these people to go home,” he said, brushing past Vittert.

“Obviously, Sean, the congressman didn’t have much interest in answering your question,” Vittert said, as Cummings continued walking.

Vittert continued trailing the lawmaker, telling him they just wanted answers to their questions.

“No doubt about it,” Cummings said. “I’m proud of Baltimore. I’m proud of my city. Let’s go home.”

Cummings encountered another Fox News personality and yelled at him, too.

“Excuse me, Geraldo! Excuse me! We’re trying to make sure people go home!”

He observed that there seemed to be more media out after curfew than protesters, and he asked them to report that.