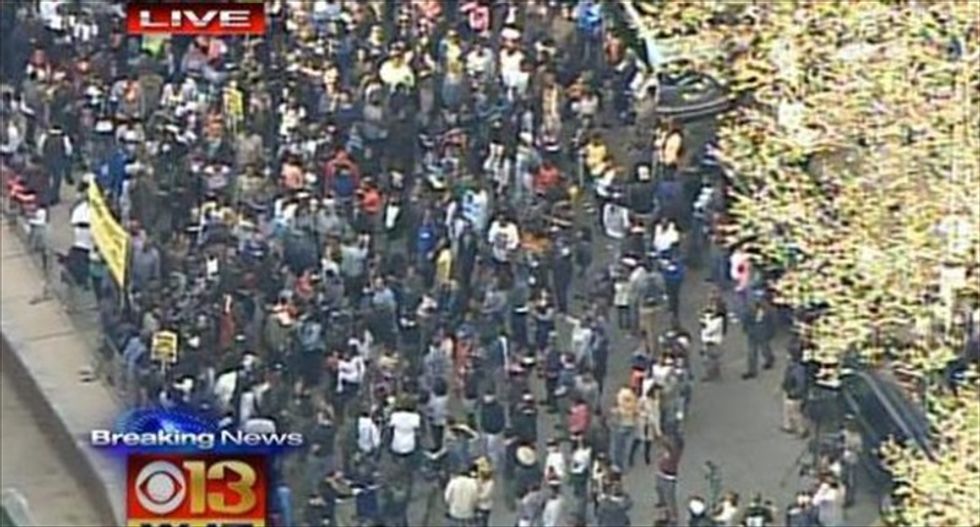 Protesters take to the street in Baltimore calling for murder charges against the police officers who arrested Freddie Gray. [WJZ-TV]

When Breitbart’s Matt Boyle isn’t framing xenophobia as “pro-worker” or rambling on about a big gay hate machine (don’t ask), he’s attending baseball games with his family. A harmless enough act, and one I’m glad to see rightwing demagogues and communists alike can agree is a wonderful way to spend a spring evening. While attending last night’s Orioles game, however, things quickly got out of hand for the Breitbart journo when unrest resulting from the apparent police killing of Freddie Gray boiled over into property damage and “clashes” between police and angry citizens outside of Camden Yards baseball stadium. Boyle's piece begins with the type of breathless hysteria one would expect from Breitbart: "War Zone: Baltimore Erupts Into Violence, Chaos as #BlackLivesMatter Riots Rage."

Where to start. First off: it’s not a war zone. Property damage and confrontations with police are not a “war,” they're standard features of domestic unrest. Secondly, this was not a “#blacklivesmatter riot.” This was a #blacklivesmatter action that, like any large system, had a number of random people take matters into their own hands and damage some property. Finally, even the use of the term “violence” here is conveniently used. As activist Deray Mckesson point out on Twitter this morning:

When the police snapped #FreddieGray's neck, the @BaltimoreSun did not call it an act of violence. Only black folk are "violent" to them.

Boyle would go on, again and again, pandering to an entirely unfounded fear that black activists were somehow targeting white people, despite the fact that several of the police they confronted were black and a great deal of the protesters were white. But never mind, Boyle had paranoia to sow and an agenda to push:

The crowd of protesters then stopped a blue station wagon carrying a white family as they tried to drive past Pickles, Bullpen and Sliders along a narrow one-way stretch between the bars and the main road (...) As hundreds of people looked on, including several police officers who didn’t engage the violent protesters, the white woman in the front seat—middle-aged and a little heavyset with dark hair—was visibly terrified. The group of black men  who ripped open the car door suddenly realized they were separated from the larger group of protesters and abandoned their quest to seemingly either carjack the station wagon or rob the people inside in front of hundreds, driving out of the one-way street back onto the main road and presumably out of dodge.

White nationalist dog whistles don’t get much louder than that. What, in this context, does the race of either the “rioters” or those in their car have to do with anything? Again, there were white protestors and, presumably, several African-Americans attempting to exit the game. Indeed, Boyle’s further attempt to smear the menacing “protesters” belied the racial motive altogether:

...their quest to seemingly either carjack the station wagon or rob the people inside

So what was it? A carjacking or a hate crime? Or, are we supposed to believe, both?

The rest of the piece is more sensationalist - and likely embellished - war-zone like pseudo prose meant to simultaneously smear #BlackLivesMatter while bolstering Boyle’s street cred -- all while pandering to Brietbart’s trademark white-victim ethos.

Drudge, per usual, wouldn’t miss a beat either: splashing on its front page this morning what appears to be a torrent of black on white assaults:

Left unmentioned, Baltimore City Paper photographer Joe Giordano, a white man, was beaten by the Baltimore Police on film the same night. This of course, like all of the other evidence this is not a black on white “war,” goes unmentioned by the rightwing media - and its feckless mainstream media enablers - eager to further trivialize and “Sister Souljah” what is, at its core, a broad-based and populist movement.

#BlackLivesMatter organizers routinely go out of their way to let whites know this is not a “race war” or a “war on white people,” but on white supremacy. #BlackLivesMatter New York leader Elsa—whose recent hospitalization at the hands of the NYPD led to an internal investigation— begins every “die in” and every shutdown with a refrain: “The media wants to make this a race war. it is not a race war. It’s war on racism.”

Her concern, it turns out, is well-placed. Those in the right-leaning media who’ve been trading on the fears of working class and middle whites for decades know that the more we can steer the conversation away from class and racial disparity to “whites vs blacks” the more potential white allies for #BlackLivesMatter will run into the clutches of polarized racial politics. When we’re not talking about structural racism but rather “race” as such, we’re not really challenging the power structure that permits the Freddie Grays of the world go on unchecked. And this, of course, is exactly what they want.