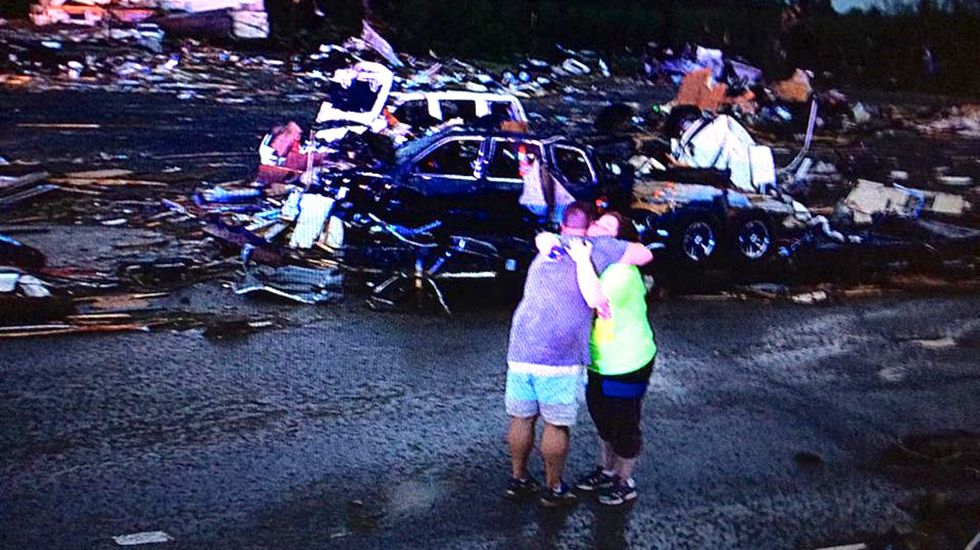 Lori Berseth (R) is consoled after searching for her missing black labrador dog Lucille after a tornado destroyed the town of Mayflower, Arkansas April 27, 2014. (REUTERS:Kathryn Piotrowski:TwisterChasers.com)

Climate change is predicted to intrude into almost every area of life -- from where we live, to what we eat and whom we war with.

That's the unusual idea put forward by British researchers Tuesday, who say the weather has powerfully but discreetly influenced the soundtrack to our lives.

And tastes in songs are likely to change as the climate shifts.

Fancy listening to the Beatles' "Here Comes The Sun" when you are grinding out yet another long, sweaty heatwave?

"But if it's going to be 40 degrees (Celsius, 104 degrees Fahrenheit) every summer for 10 years... that might change how people feel about the weather and the emotions they link to it."

Aplin and five other scientists combed through databases of more than 15,000 pop songs, finding statistical backing for the assumption that our moods are strongly swayed by the weather.

These emotions, in turn, are expressed in the music that artists compose and what the public likes to hear.

The team looked at some of the most popular English-language songs, mainly from the United States and Britain, from the 1950s to today -- drawing heavily from an online karaoke website.

They searched song titles, band names and lyrics for references to weather.

Of the 500 greatest songs of all time, as listed by Rolling Stone magazine in 2011, a whole seven percent were weather-related.

Bob Dylan, John Lennon and Paul McCartney were the most prolific in this category.

The sun was referenced most often, followed closely by rain, although "pretty much all types of weather came up", said Aplin.

The seasons and wind or breeze were third and fourth most popular, while "frost" and "blizzard" were at the bottom of the list.

Love and relationships were unsurprisingly the biggest single category for weather metaphors -- "Ain't no sunshine when she's gone," crooned Bill Withers, while Billie Holiday lamented the "Stormy weather" after a breakup.

"What we found about pop music was that the lyrics can be used very clearly to link the weather to a particular emotion, and usually the sun is positive and rain is negative," said Aplin.

An exception was some Country and Western songs, which "talked about rain as a positive thing: it brings crops and food," said the atmospheric physicist who also plays double bass in an orchestra.

The researchers were intrigued to find that in the 1950s, an active decade for hurricanes, more music was written about wind and storms.

This highlights the potential for a shift in musical themes if climate change brings ever-more frequent extreme weather events, as predicted.

Chirpy songs about sunshine and gentle summer breezes could get elbowed in favour of darker, more dramatic fare.

Based on present carbon emission trends, say climate scientists, worsening droughts, floods and storms as well as rising seas are waiting for us a few decades from now.

"Under climate change, the type of weather people are influenced by to write might change," said Aplin.

"You might find more songs about severe weather because that is more part of people's live, or a backdrop to their lives, than the weather we have now."

The research paper, which Aplin said had been accepted to appear in the Royal Meteorological Society publication "Weather" in May, will have an online link to the list of songs compiled so far, with an open invitation for people to add to it.