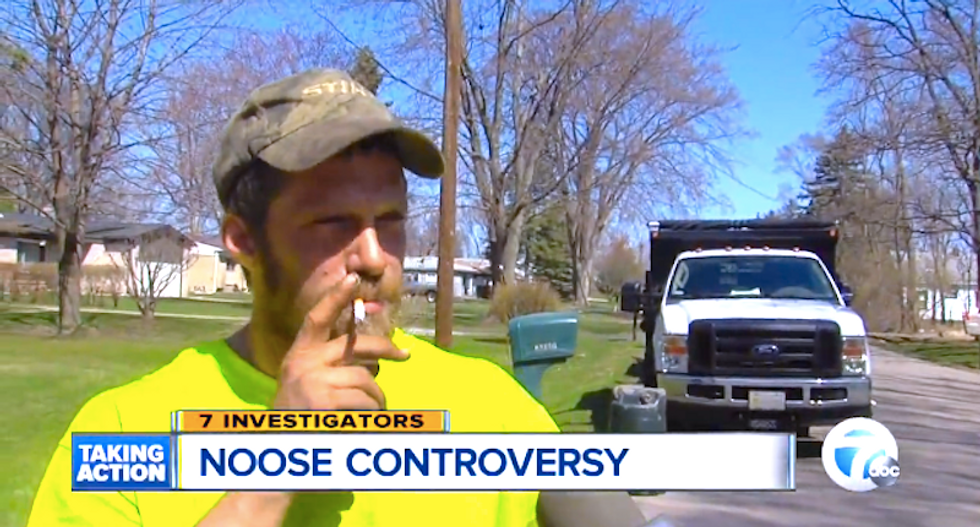 An employee of Robert Tomanovich (WXYZ)

A Michigan tree trimmer and one of his employees set up a display featuring a Confederate flag and a pair of nooses – and they don’t care about neighbor complaints.

Neighbors complained about the display outside Robert Tomanovich’s home in Livonia, where he hung a noose from a tree and a Confederate flag, printed with the slogan “I ain’t coming down,” on a fence, reported WXYZ-TV.

After the complaints, a second noose was hung from a tree outside a second home Tomanovich owns down the street and used for his business, Robert's Discount Tree Service.

"It’s a tree that is easily climbable," said neighbor Nicole Behrendt. "Any kid could climb the tree and hang himself."

Tomanovich fled inside his home when a WXYZ-TV reporter asked him for comment, but one of his employees admitted to hanging the second noose in response to the neighbor complaints.

“I love it,” said the employee, who displayed a Confederate flag license plate on his work pickup truck. “Screw ‘em.”

The employee, who declined to give his name, said he and his boss would not take down the flag or nooses.

Tomanovich's wife, Lindy, said the display was not intended to be racist.

"Robert has a friend that died in that way (hanging himself), and that's in memory of his friend," she said.

She claimed her husband’s family is from the south and they simply like the way the Confederate flag looks.

"Maybe they got too much time on their hands," Lindy Tomanovich said about her meighbors. "There's no crime in hanging a noose."

Police said the display did not likely break any laws since it does not appear the display was intended to target anyone in particular, but they hope to mediate the dispute between the homeowners and their neighbors.