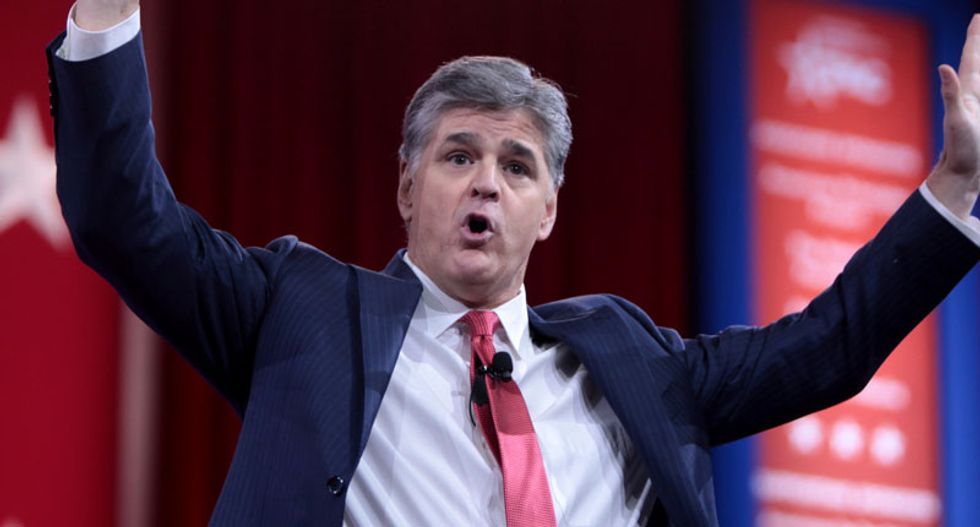 Sean Hannity and his guests blamed Jon Stewart's mockery of their salacious spring break coverage last year for a gang rape this year that was recorded on video showing witnesses stand by and offer no assistance.

Guest Gavin McInness, the Vice co-founder, said he and Hannity tried to warn viewers that women were vulnerable while partying at spring break, but he said Stewart and his "Daily Show" writers were "cracking jokes like we're at a rape roast," reported Mediaite.

“You have that smug cretin, that despicable Jon Stewart, literally touching his eyebrows (and) going, ‘What’s the worst that could happen, hall monitor Sean Hannity? She’s going to blow out her left butt cheek twerking?” McInnes said.

Hannity interrupted his guest, saying that seven people were shot the day he finished his spring break coverage on Fox News -- which frequently features lingering camera shots of young women in bikinis as panelists question their parents’ judgment.

“I’ll tell you the truth – the crimes do not get reported,” said guest Bo Dietl, a former New York City police officer and frequent talk show guest. “There’s dozens, if not hundreds, of crimes (and) violations. Without the video, yeah – she wouldn’t even remember who raped her. Three guys raped her.”

Hannity said spring break revelers are “wasted” after “pouring all this beer down into their gut,” along with drugs such as “Molly” and heroin.

Dietl compared the Panama City gang rape to the fatal 1964 stabbing of Kitty Genovese, which was overheard by neighbors outside her Queens apartment.

“Jon Stewart and all these smug liberals who were laughing the whole time are the same as the bystanders who walked by,” McInnes said. “They have the same blood on their hands. They made jokes about rape, and they’re not funny.”

Hannity agreed, saying Stewart and other media watchdogs attacked his program’s coverage despite being “too busy with his head up Obama’s butt.”