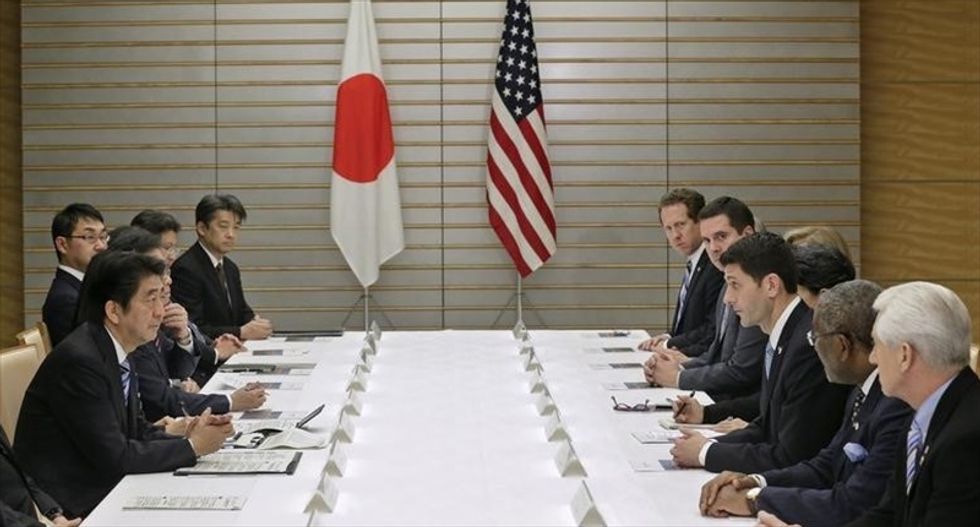 Legislation to give the White House "fast track" authority to nail down a Pacific trade pact cleared its first hurdle in the U.S. Congress on Wednesday as a committee backed the bill and sent it to the full Senate for consideration.

Approved by the Senate Finance Committee on a 20 to 6 vote, the legislation would prohibit Congress from amending trade deals, instead allowing for just up-or-down votes.

It is vital to closing the Trans-Pacific Partnership, an agreement that would link a dozen economies and cover a third of global trade. TPP is central to President Barack Obama's strategic shift toward Asia.

Fast-track authority could now go to the full Senate for a vote as early as next week, just as Japanese Prime Minister Shinzo Abe is due in Washington to address lawmakers at a joint meeting of Congress, but it needs to be approved by the House of Representatives as well.

After lively debate in the committee, senators rejected an amendment that would have exposed nations that manipulate their currencies to sanctions, although it could be resurrected in the House of Representatives. Japan has warned that tough currency provisions in fast-track could kill the TPP.

The panel instead backed two other provisions beefing up rules against currency manipulation in a separate bill accompanying the fast-track legislation.

Senators defied warnings from the Obama administration and backed a change opening the door to import duties against countries found to be manipulating their currencies.

The other provision, supported by the administration, would allow the United States to consider restricting government purchases from currency-cheating nations or even block them from future trade deals.

The bill was approved along with measures to extend both trade preferences for African nations and aid to workers who lose their jobs due to trade.

Many Democrats fear new trade deals will cause a repeat of the factory closures and job losses seen after the North American Free Trade Agreement between the United States, Canada and Mexico was approved in 1993.

But fast-track authority is backed by mainstream Republicans, farmers and business groups who think trade deals in the pipeline will cut tariffs on U.S. exports and set higher standards for U.S. intellectual property.

The White House sees the TPP as a counterweight to China's influence in the Asia-Pacific and has warned that the Asian giant will set the rules for trade if the United States does not move ahead with the TPP, which is near completion.

TPP must pass Congress this year to avoid being bogged down in the run-up to the 2016 U.S. elections, where it could put Hillary Clinton, who is seeking the Democratic nomination for president, in a difficult spot.

Clinton, who championed TPP as secretary of state under Obama, has been cautious in her stance. On Tuesday, she said any trade deal had to "produce jobs and raise wages and increase prosperity and protect our security."

The bill will likely face a tougher fight in the House of Representatives than the Senate, where Republicans would need to pick up only six Democratic votes to avoid delaying tactics, assuming there are no defections from the Republican side.