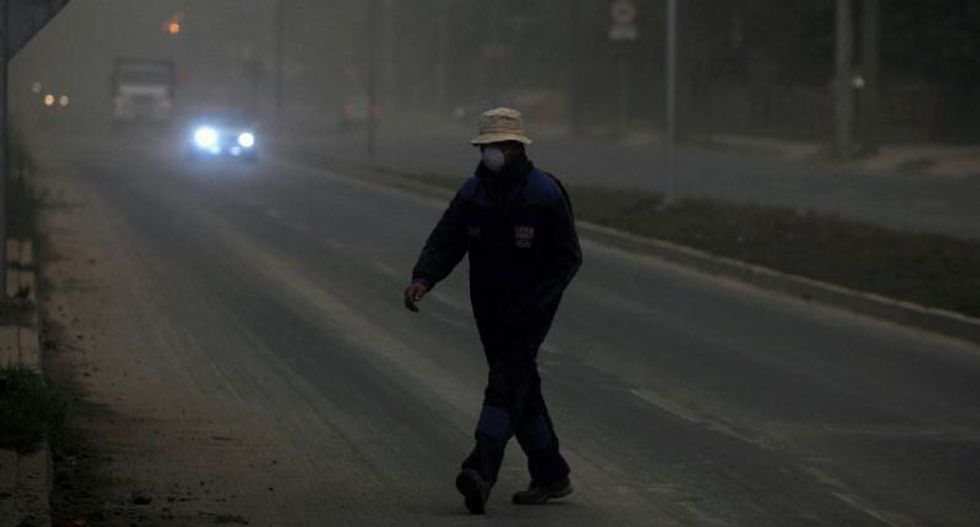 A man walks at midday in a street in Pucon, covered by ash from the Calbuco volcano, located some 400km north of Puerto Varas, on April 23, 2015 (AFP Photo/Sebastian Escobar)

Southern Chile dug itself out from under a thick layer of gray ash Friday while keeping a wary eye on the Calbuco volcano after it spectacularly erupted for the first time in half a century.

The volcano burst into life with two eruptions Wednesday evening and Thursday morning, forcing 4,500 people to evacuate as it belched a huge cloud of ash into the air before lighting up the night sky with fiery bursts of lava and volcanic lightning.

The volcano again caused alarm when it emitted a large puff of smoke early Friday morning, but initial warnings of a possible third eruption have not materialized so far.

Residents kept nervous watch on the volcano as they began cleaning up the blanket of ash that covered everything for miles around.

The evacuation area, a 21-kilometer (13-mile) radius around the volcano, was turned into a scattering of ghost towns buried under ash up to one meter (three feet) high, an AFP photographer said.

In La Ensenada, a town of 1,500 people that was the first to be evacuated, workers used heavy trucks to plow the roads clear as a handful of residents defied the evacuation order to shovel the ash and debris off their rooftops.

The weight of the ash caused some roofs to collapse.

Authorities said that if the current conditions held, residents would be allowed to return home for a few hours in the afternoon to retrieve some belongings, after fleeing with nothing but the clothes on their backs.

The ash cloud meanwhile continued to drift, disrupting flights across a large swath of South America.

In Buenos Aires, on the other side of the continent, American Airlines, United, Delta and Air France all cancelled flights to and from Europe and the United States.

Argentina's National Weather Service said the volcanic particles covered "the entire central zone of the country," including the capital and several other major cities.

After the eruptions, authorities declared a state of emergency, sent in the army and evacuated La Ensenada and other towns at the foot of the volcano.

Experts cautioned that a third eruption could still follow.

"We're still in what is considered the crisis phase. Our instruments are monitoring the situation. We cannot rule out a new eruption," said Rodrigo Alvarez, head of the National Geology and Mines Service.

President Michelle Bachelet, who flew to the affected area Thursday, said: "We don't know how the situation is going to evolve. It's pretty unpredictable."

There have been no reports of injuries so far, but officials warned the ash could be harmful for people, animals, crops and infrastructure. Authorities handed out protective masks in both Chile and Argentina.

The first eruption, which started around 6:00 pm (2100 GMT) Wednesday and lasted about 90 minutes, spewed a giant mushroom cloud of ash 10 kilometers into the sky, which turned hues of pink and yellow as the sun set over the area.

Seven hours later, Calbuco erupted again, this time shooting lava into the air and generating volcanic lightning, a phenomenon researchers believe is caused by the emission of large amounts of molten rock and ash charged with static electricity.

Bluish-white bolts of lightning cut through the red and orange plumes of lava in a stunning display of nature's power that played out against the backdrop of the night sky.

Until minutes before the first blast, volcano eruption monitoring systems had picked up nothing. In fact, volcano watchers in Chile had been warily keeping an eye on another volcano, Villarrica.

The region, Los Lagos, is popular with tourists, with beautiful mountain landscapes dotted with volcanoes and lakes with black-sand beaches.

It is the second eruption in Chile since March 3, when Villarrica emitted a brief but fiery burst of ash and lava.

Chile has about 90 active volcanoes.