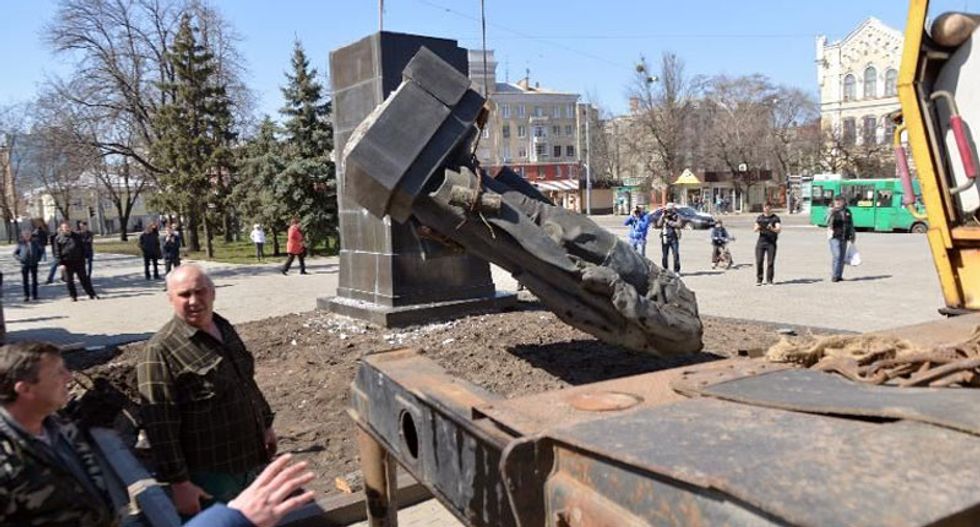 As Kiev and Moscow traded angry barbs in an escalating war of words over their shared history, President Petro Poroshenko likened Russia's support of separatist insurgents in eastern Ukraine to Nazi Germany's actions in Europe in the 1930s.

"What is the difference between the Anschluss of Austria or the occupation of Sudentenland, and the annexation of Crimea or the attempts to tear away Donbass in 2014?" said Poroshenko.

He referred to a swathe of eastern Ukraine captured by separatist rebels operating with Russia's support, according to the West. Moscow denies the allegations of involvement in the insurgency against Kiev.

His harsh tirade ahead of the 70th anniversary of the WWII victory over the Nazis is likely to deeply offend Moscow, which is planning massive May 9 celebrations.

In Kharkiv, where three Soviet-era statues were toppled in the dead of night, an anti-Russian group called "We've Had Enough" posted a video showing the monuments glorifying Bolshevik heroes come smashing to the ground.

The Russian-speaking city of 1.4 million people close to the northeastern border with Russia is about 200 kilometres (120 miles) from the conflict zone in the Donetsk and Lugansk regions, where more than 6,000 people have been killed over the past year.

The video shows the men using a ladder to hook the statues with a cable tied to a white van that pulls away, bringing them down, with the police in one instance looking on without attempting to intervene.

Kharkiv's pro-Russian mayor Gennady Kernes described the night-time raids as "vandalism" and demanded that police "explain why they allow the illegal demolition of monuments."

The attack follows a ban this week on Nazi and communist symbols and names. The pro-Russian Opposition Bloc party, which has 40 of 450 parliamentary seats, said Saturday the legislation was responsible for the destruction in Kharkiv.

The ban, which was rushed through parliament Thursday and must be signed by Poroshenko before coming into force, is stoking tension in the war-divided country of 45 million.

Supporters of the legislation say it will help Ukraine break with its tragic World War II past and with Moscow's domination through most of the 20th century.

Russia said the law would "create divisions" and promote a "nationalist ideology".

The package of laws bans Soviet flags and means that Soviet-era Lenin statues will have to be removed and streets and town squares renamed across the country of some 45 million.

"In the West, friends of Ukraine will have a difficult time accepting both the wisdom and timing of such a facile and asinine decree," he said.

"The all-encompassing rejection of any facets of the Soviet legacy is troublesome," Marples wrote. "The Red Army after all removed the Nazi occupation regime from Ukraine in alliance with the Western Powers."

Soviet WWII veterans will be entitled to continue to wear their medals, however, and graves will be left in peace, even if inscribed with the hammer-and-sickle or other Soviet insignia.

Kiev sociologist Andriy Bychenko said the parliament's anti-Soviet drive was in tune with widespread belief that Russia is fuelling the bloody rebellion in the east.

"Feelings towards the symbols of the Soviet Union have become sharply more negative since the beginning of the Russian aggression," he told AFP.