Ted Cruz loves the Simpsons, but the feeling isn't mutual: ‘Go ahead, throw away your vote’ 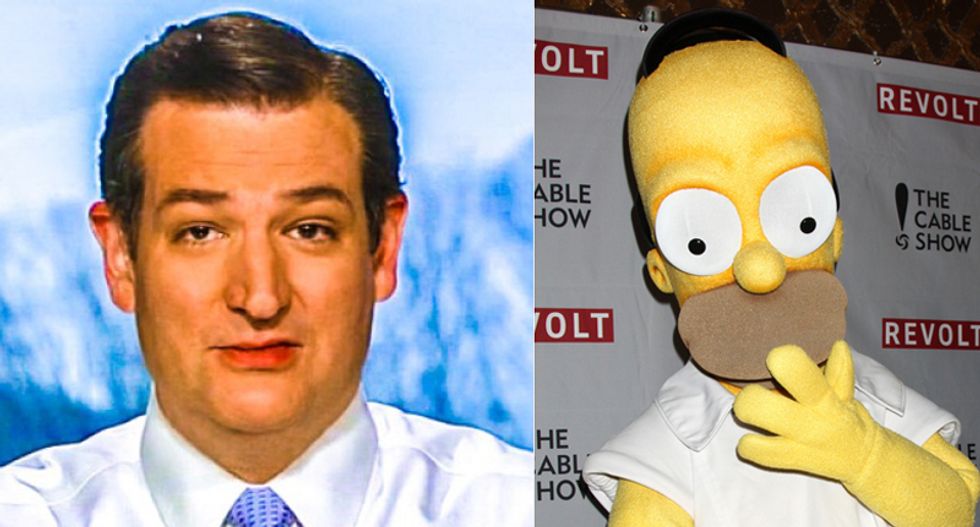 On a radio broadcast Thursday, Texas Senator Ted Cruz expressed his love for The Simpsons, only to have the showrunner for the long-running cartoon throw a little shade his way, quoting a line from one of Cruz's favorite episodes.

Appearing with The Daily Beast's Washington bureau chief Will Rahn, Cruz talked about his attempts to overturn Obamacare, why he believes other senators don't care for him, and popular culture, including what television shows he likes and watches.

Cruz stated that he's not a fan of HBO's True Blood -- which famously mocked him in a 2014 episode -- but that he was a big fan of The Simpsons on the Fox Network.

Quoting lines from the show, Cruz explained that his favorite episode was 1995's"Round Springfield" in which the line “cheese-eating surrender monkeys”  was coined to needle the French. The phrase later became popular with conservatives after the U.S. was unable to persuade the French to sign up for the misguided 2003 Iraq invasion.

Cruz also cited a segment in 1996's “Treehouse of Horror VII,” in which the power-hungry space aliens named Kang and Kodos assume the identities of Bill Clinton and Bob Dole in order to run for president and thereby rule the world.

In the episode, Kodos explains to a voter that  he has no choice to vote for one of them, pointing out it is a "two-party system." When the man says he thinks he'll vote third-party, Kang replies, "Go ahead, throw your vote away."

Contacted by The Daily Beast for a comment on Cruz's appreciation of the show, Simpsons showrunner Al Jean did not return the love.

“To paraphrase Kang, ‘Ted Cruz?’ Go ahead, throw your vote away,” Jean replied.