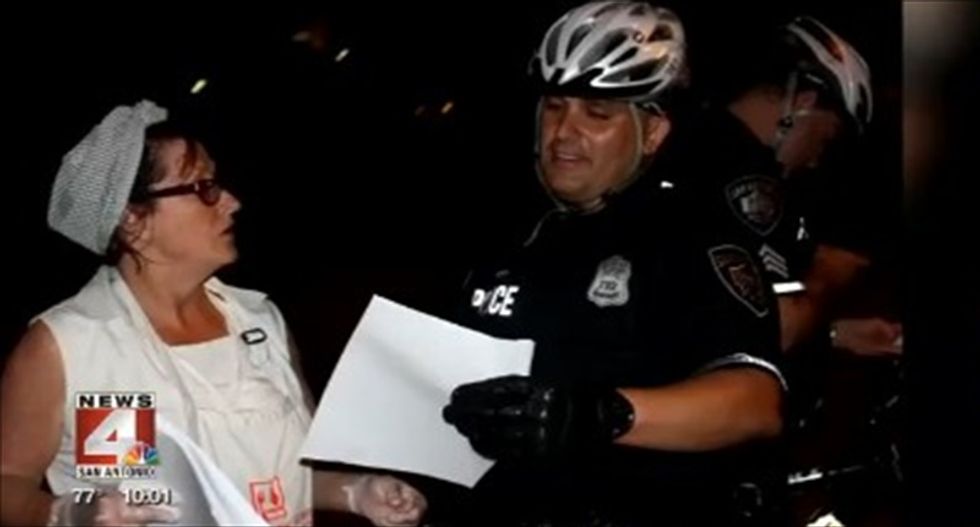 A San Antonio woman is planning to use the state's "religious freedom" law to contest a citation she received for feeding homeless residents at a local park, the San Antonio Express-News reported.

Joan Cheever said four bike-patrol officers ticketed her last week for handing out food from a vehicle that was not her food truck. It was reportedly was the first time authorities stopped her after providing a free meal for the homeless every week since 2005.

The citation carries a potential fine of $2,000. When she goes to court on June 23, she said, she will argue that she should be allowed to continue sharing her food because it is a valid expression of her faith under the state's Religious Freedom Restoration Act.

"One of the police officers said, 'Ma'am, if you want to pray, go to church,'" she told WOAI-TV. "And I said, 'This is how I pray -- when I cook this food and deliver it to the people who are less fortunate."

Despite the ticket, Sheever plans to continue handing out food in the weeks leading up to her court appearance.

"You can't just turn away from your neighbor when they're in need," she said. "We don't do that in San Antonio."

According to the Huffington Post, federal district Judge Jorge Solís struck down an ordinance in Dallas limiting where charitable groups could distribute food to the homeless, saying that "the homeless feeders are religiously motivated institutions that are afforded statutory protection to practice their religions without being substantially burdened by government regulation."

WOAI's report on Cheever's run-in with police can be seen below.