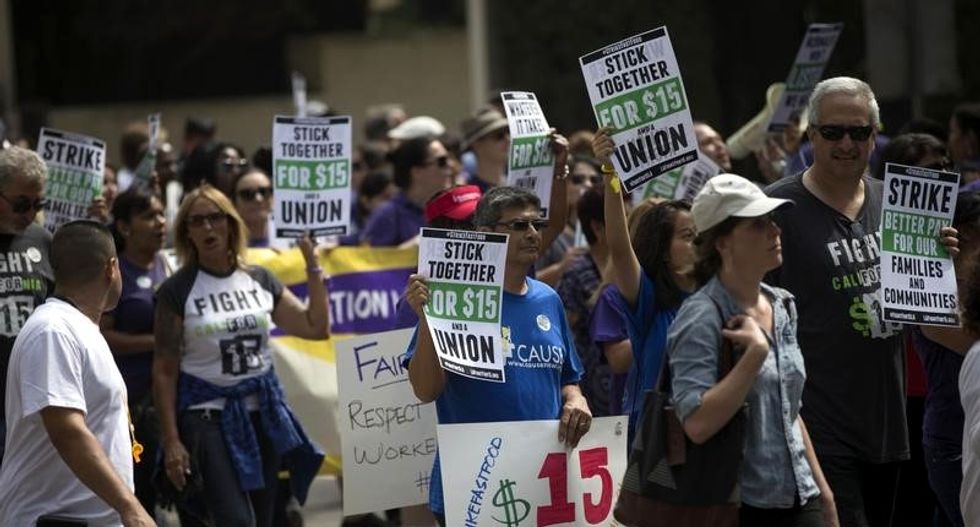 Fast-food workers rallied on Wednesday for higher pay, using the April 15 tax deadline to publicize their claims that they cannot survive on the hourly wages paid by many U.S. corporations.

The protests for pay increases to $15 an hour, planned to spread nationwide, kicked off at dawn outside a McDonald's in New York with several hundred demonstrators.

Marching behind a banner reading "Raise wages, Raise the city," protesters carried placards that read "Fight for $15 on 4/15."

Jumal Tarver, 36, said he cooks and cleans at a franchised McDonald's in Manhattan but cannot make ends meet on his pay of $8.75 per hour.

He said he must rely on public assistance on top of his salary.

Organizers said they chose to mobilize on April 15, the U.S. deadline for filing federal income tax returns, to highlight their complaint that many workers must rely on public assistance.

Plans called for rallies to be held in 230 cities across the nation.

The campaign by low-paid workers for a living wage has been building on their position that the U.S. federal minimum wage of $7.25 an hour is not enough to lift them from poverty.

Fast-food and retail chains are starting to respond, but their wage increases are generally less than organizers demand.

McDonald's said it would raise pay at company-owned stores to $9 an hour but this would not necessarily apply to the more than 90 percent of its 14,000 U.S. locations operated by independent franchisees.

Joining the fast-food workers was Jacqueline Taylor Basker, a 75-year-old adjunct professor of art history. She said she just lost her position at the New York Institute of Technology, where she was paid about $1,000 per course.

"We're all being exploited by corporations and institutions that are making plenty of money and not sharing it with the people who make the money for them," she said.