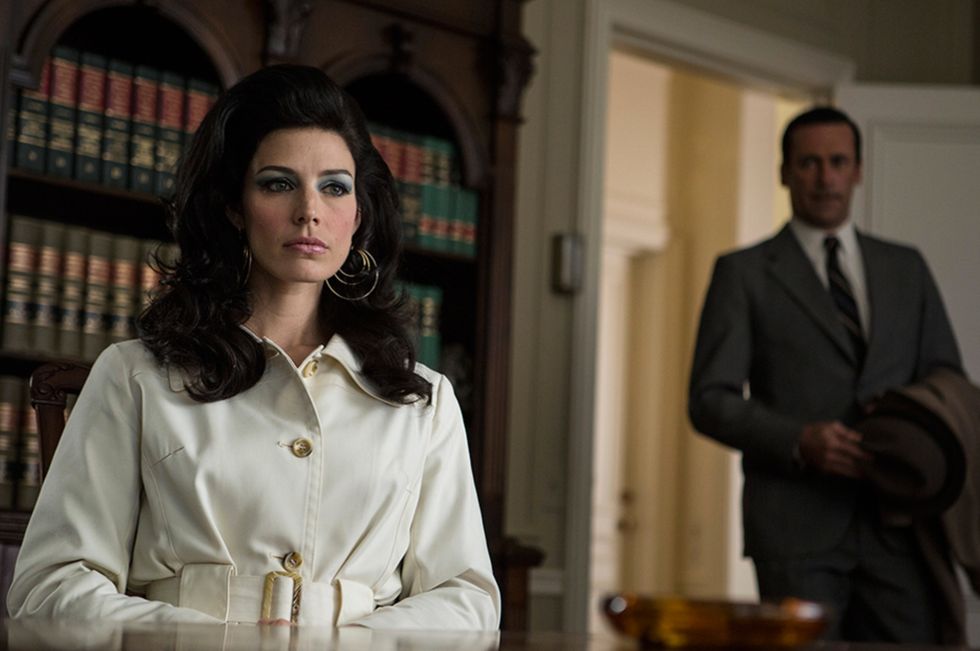 New Orange Couch, where we enjoy watching one woman after another decide that her life is better if she severs relations with Don Draper completely:

I saw that most critics didn't like this episode, mostly for sentimental reasons: They want the last few episodes to be all about favorite characters instead of focusing so heavily on the themes that have directed this show for its entire run. But I disagree. I liked this episode and I really like the way that it ties a critique of capitalism to a critique of, for lack of a better term, patriarchy. Don cannot seem to get over this idea that women are objects to be bought and sold, and that human connection can be reduced to a commodity. And, as women become more liberated, they are increasingly rejecting that role, making life a whole lot harder for Don.

One common complaint I saw was that this episode was too Megan-focused. But I like the character so I didn't mind. More to the point, I really appreciated how the episode was willing to end her story on a note of ambiguity. Throughout the episode, there was a rather indelicate question being asked, which is, "Is Megan a whore?" (Not my choice of words---that word was trotted out during the episode.) The theory Megan is a trophy wife and therefore basically a sex worker was suggested to both Don and Megan, both of whom rejected that idea. Roger said it in so many words to Don, who replied by denying that Megan is Jane. And Harry, being Harry, basically told Megan she was Don's whore and that she failed by setting her price too low---implying he would be totally willing to pay the "correct" price of getting her an agent. This struggle came up again with Megan and her mother, as they tussled over which behaviors were more whore-like and which ones were just a wife getting her just desserts.

In the end, Megan takes the money, of course. But I don't think the implication is that she's caved into all these efforts to define her as a whore. Instead, I feel, the writers were positing that, in a male dominated society, the distinctions between "wife" and "whore" are more window dressing and, at the end of the day, it's all the same thing because it's all about men reducing women to objects to be controlled and bought off. Megan wanted a true partnership, but, the show implies, that is impossible in the world she lives in. But if men are going to treat you this way no matter what you do, you might as well take the money and run. In a sense, by giving her that million dollar check, Don has finally freed her from the system. One final indignity but never again will Megan have to rely on a sugar daddy relationship to get by. She has fuck-you money now. In this sense, she's a lot like Joan, who traded one repulsive night with one gross man for never having to worry about money---and the power money gives men over you---again.

It's that hopelessness I found intriguing. Mad Men completely rejects the idea that women can rise above sexist systems simply by being plucky and independent-minded. It suggests instead that every woman, no matter how tough she is, is trapped by the system. Megan was a sweet person who just went with the flow, falsely thinking if she played nice, things would work out for her. In the end, she's telling her sister that she's totally over that , explaining to her sister that women should be allowed to break the rules, since the rules were meant to fuck us over. So well done, and I'll miss her character.

Thoughts on the episode?