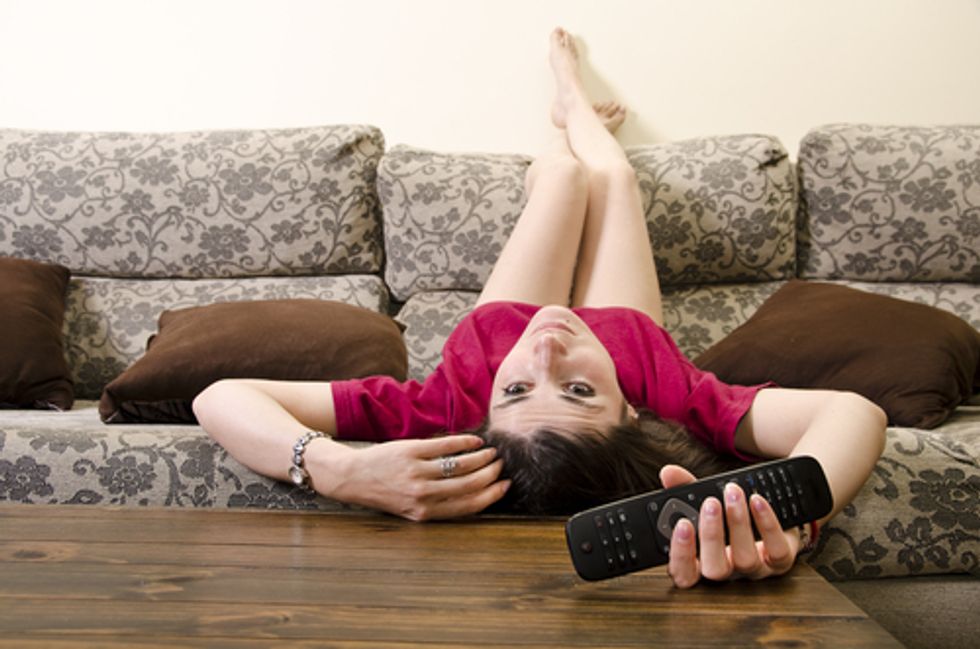 What is it that he thinks I'm doing right now, again? Dance classes or my Friday night poker game?

It's the 20th anniversary of The Rules, a misogynist and inexplicably popular dating advice guide that, in retrospect, was clearly the opening shot in the anti-feminist backlash that really came to define the late 90s and early aughts.* Leigh Anderson at Vox writes about how that book was ubiquitous in her early 20s and how her attempt to follow "the rules" led to a disastrous date with a jerk who was so sure that he was a catch that, when she decided to abort a date after he both a) assumed they were definitely having sex and b) asserted that he would not deign to wear a condom, he somehow thought he could threaten and bully her into unprotected intercourse by yelling, while chasing her down, "Do you understand that if you leave now, it's over?"

To be fair, I think that asshole probably would have done that no matter how she acted, as he seemed to assume she was desperate for male validation in any form, by virtue of her gender, and wasn't paying attention to her behavior one way or another. But her larger point, I think, is that because The Rules was so invested in teaching women how to "attract" men that it never stopped to ask the question of whether or not a woman should have standards for herself. Anderson writes:

The Rules emphasizes that men are naturally, biologically wired to be the pursuers, and women ignore that at their peril. So women adjust their behavior to conform to what they believe men want, even when it means — as in my case with Brian — that they squash their own needs and desires. "Men Do What They Want to Do," intones The Rules, like that's an immutable fact that must be accommodated.

But outside of a few guidelines for playing hard to get, you were otherwise instructed to act like a desperate supplicant who would do anything to placate a man. Having your own opinions---or even really talking much at all---was forbidden. He was to do all the planning for and paying for dates, so that you were just a duckling following his lead. Even sex, which is seen strictly as a thing women do for men, was a place where having any needs or desires at all was seen as too threatening to the fragile male ego. Anderson writes:

But the overall theme, presented to you as lovingly as your captor might tuck you in at night, is: adjust to men's needs. Be someone different from who you are. Squash your own desires. To wit: In bed, "don't be a drill sergeant, demanding that he do this or that. ... Remember, those are your needs you're concerned about filling, and The Rules are a selfless way of living and handling a relationship."

Indeed, the only boundary you were allowed to set---and I use "allowed" in the loosest sense of the word, since the authors of The Rules set these boundaries for you---was regarding how much contact, especially sexual contact, he got from you. But even that was misogynist in the extreme, since the underlying idea of The Rules is that the less a man sees of  or hears from a woman, the more he likes her. The assumption, shot throughout the book, is that it was a given that the reader, being female, is an inherently repulsive and despicable creature and that the only way to get a man to love you is to trick him into thinking you're something else.

Reading The Rules in the early aughts, I walked away feeling like, if this is how men really are---if they cannot really love a woman, but can only begrudgingly allow you into their lives if you promise to sit still and be quiet---it would be better off to be alone. But obviously, that's not actually how love works, and most people who are falling in love actually fall into this pattern where they want to spend oodles of time together, talking and sharing. I have no doubt there are plenty of men out there who do want someone who recedes in the background and just needs occasional jewelry deposits in exchange for allowing sexual penetration, but there are a lot of other men who want love.

Which is another thing about The Rules: On top of being misogynist, it was anti-male, painting all men with the same brush, saying they're all misogynists and there's nothing you can do about that, so you just have to try to trick one into allowing you to wash dishes and suck his cock for him.

The Rules is 20 years old, so why take all this time to examine and criticize a relic? Because, as Anderson points out, the mentality it's peddling still looms over the dating market.

In 2014, Ellen Lamont, a sociologist now at Appalachian State University, published two studiesof heterosexual dating rituals among young men and women living in the Bay Area. She found that though most of this group identified as progressive and even feminist, those who cited marriage and children as a goal nonetheless stuck to traditional scripts while dating. "[T]he message from The Rules was definitely brought up frequently by the women I interviewed," said Dr. Lamont in an email. "Women worry about appearing too desperate should they decide to pursue a man, and they worry this judgment will come from both men and other women."

Again, I can't help but think that the best way to show a man that you aren't desperate is to simply be yourself: Share your opinions, don't be afraid to disagree, don't act submissive. But that's verboten in the world of The Rules, which emphasizes that you should always be placating.

This conundrum, I think, is best understood when you look at the iconic game-playing that The Rules recommends: pretending you have plans when you don't. Such as, for instance, refusing a date on Saturday if he calls after Wednesday. It's not false that people who have lives are more interesting and attractive than people who don't, of course. But the better way, it would seem, to seem like that kind of person is to simply be that kind of person: Get some hobbies, make some friends, that sort of thing. But that is frowned upon. You are supposed to appear to be busy, but you are not supposed to actually be busy. It's a delicate balancing act, where you are supposed to feign non-neediness so that he doesn't feel like he has to do anything for you besides give you gifts on occasion, but you are also supposed to make him feel like the sun rises and sets on his ass.

Sounds stressful, and yet the sense you have to do this or be forever alone continues to plague and haunt women, even though their personal experience tells them otherwise, all through the power of  propaganda like The Rules.

*It seems the feminism/backlash cycles are getting shorter. The first one had a feminism cycle of over a decade, from the late 60s until the late 70s/early 80s. Then the 80s were a long backlash cycle. The next feminism cycle, called "third wave", lasted only half a decade, the early 90s, until there was a resurgence of popular misogyny, represented on one end in pop culture (gangsta rap as an answer to TLC/Salt 'N' Pepa, Limp Bizkit/Dave Matthews as an answer to Breeders/Sonic Youth/L7, sexy virgins like Britney Spears as answer to non-objectified female rock musicians played instruments, had sex, and dressed like normal people) and on the other end, by the resurgence of the religious right and the election of George W. Bush. Now I don't even know if it's cyclical anymore, since we're living in a time of both overt feminism in pop culture but overt backlash in the form of the war on women. Maybe history will clarify these things.