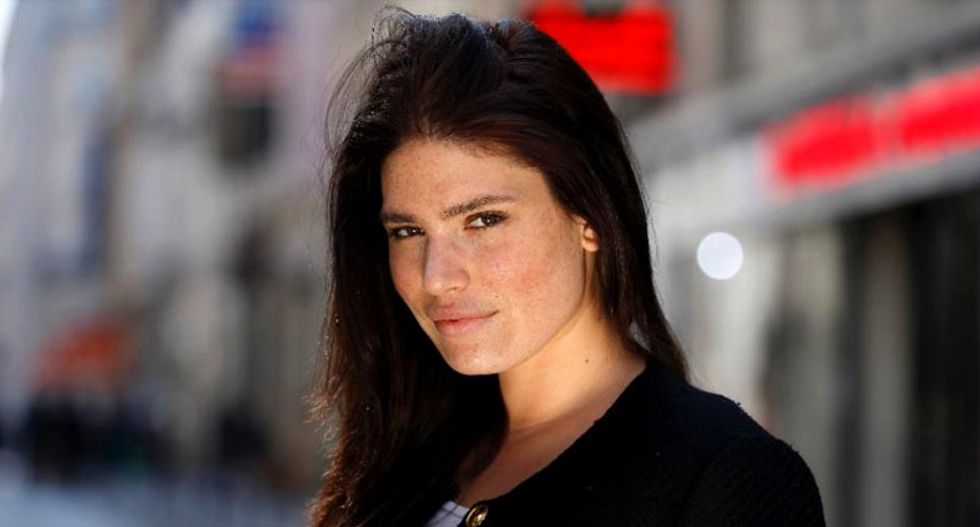 French plus-size model Clementine Desseaux, pictured in Paris on April 9, 2015, says France's waif obsession means its fashion sector snubs many women with bigger body types, but there is no need for a ban on ultra-thin models (AFP Photo/Thomas Samson)

France's waif obsession means its fashion sector snubs many women with bigger body types, but there is no need for a ban on ultra-thin models, said the patron of a plus-size Paris catwalk show under way this weekend.

"It's a cultural blockage," explained Clementine Desseaux, a 26-year-old French model who lives in New York.

The size-44 brunette gets year-round catalogue and campaign modelling work in the US, where she emigrated four years ago, compared to rare jobs in France as American department stores recognise that most women aren't slim, she says.

"In the United States, it's a market apart. You can make a career as a plus-size model. In France, it's not a career, it's a hobby; there are no clients" Desseaux said.

But, she added, "it's not for lack of demand: there are a lot of round women here. Parisian women are round, too. You mustn't think they are all small and thin!"

The data back her up. According to the French Institute for Textile and Clothing, size 40 is the most-sold size in France, and 40 percent of Frenchwomen wear size 44 or over.

In an effort to rebalance the scales, Desseaux is the star model at the third Pulp Fashion Week, an event held over Saturday and Sunday in Paris that features larger women on the catwalk.

Twenty-four models will be walking the podium in some 20 labels to show that fashion is not only for the slimmest of customers.

Such initiatives are also held in the US, Britain and Germany, with greater success.

The organiser of the Paris event, Blanche Kazi, said the refusal by major plus-size fashion labels was the main stumbling block.

"They are the ones who could really shake things up with big sponsor budgets and financial partnerships," she said.

She and the models, though, are determined to instil a sense of pride in plus-size women in France, and to push French clothing stores to cater to larger sizes.

"Here, the image of big-size women is horrible. There's a lot of work to be done," Desseaux said. "I want to make things change. One day I'd like to return to Paris, but I'm not ready yet."

In France, the model said, "I don't fit into anything. And yet, I'm not huge. In the United States, I fit into size M or L. There are a lot more sizes -- nothing stops at size 42 in the US."

- Against ban on thin models -

For all her morphological militancy, Desseaux is against France's mooted legislation to ban ultra-thin models who are under a certain body mass index (BMI).

The measure was voted last week by lawmakers in the French parliament's lower house, and could well become law if the upper house backs it.

Desseaux, like other professional models, believes that the natural thinness of many top catwalk models is being wrongly mixed up with the medical condition of anorexia.

"The problem is not a model's BMI," she said, adding that a more concrete issue was the insistence of certain fashion labels to hire only underfed models.

Desseaux said a friend who used to work at one of France's most recognisable top fashion houses told her about a heavy door it had at its entrance.

"If a model arrived and was able to open the door by herself, they didn't hire her -- that meant that she was too strong."

That belittled strength, however, is exactly what Desseaux and other XL models are now using to open the door for the French fashion world to accept larger frames -- and it's a door they intend to open wide.