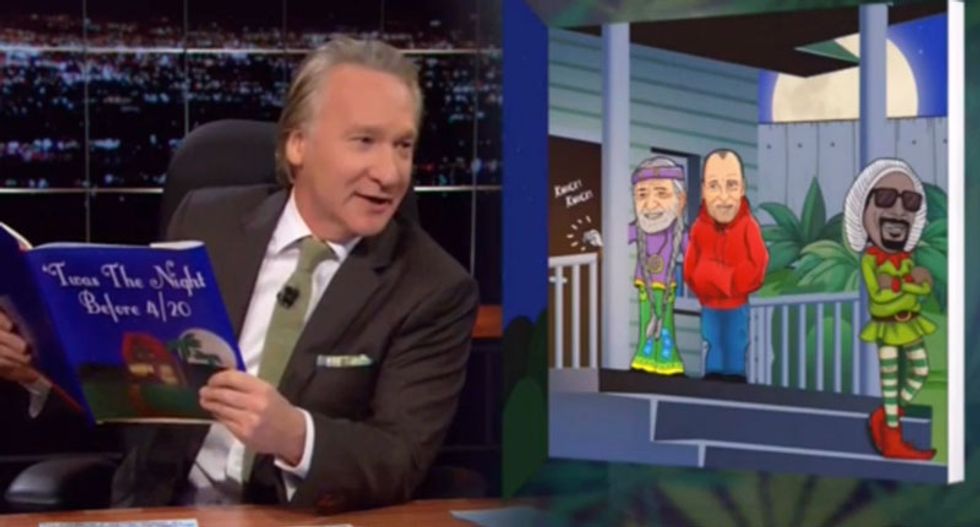 Real Time host Bill Maher went big on his crusade to turn the "stoner holiday" of April 20 -- aka 4/20 -- into an actual one on Friday.

"It's more worthy than Columbus Day," he told his guests. "Why should we celebrate that racist psychopath?"

To help get his message across, he delivered a fairy tale for the occasion, "Twas The Night Before 4/20."

"Twas the night before 4/20, and all through the crib, not a creature was stirring, not even -- did you hear something?" Maher began. "I was wearing a t-shirt and shorts from the gym, I'd just settled down to watch Adult Swim."

Instead of three angry spirits, though, Maher was visited by Willy Nelson, his "jolly elf" Snoop Dogg and Woody Harrelson.

"I knew by their manner and their lovely aroma, that they'd all brought me something to cure my glaucoma," the host continued. "And I heard them exclaim as the light bathed them dimly, 'Bill, you f*ckin' stoner, let us in -- you don't have a chimney!'"

"They were after a pothead who matched my description, but I reached in my pocket and pulled out my prescription," he said, drawing a cheer. "They looked at closely, they began to whine and to grouse. But they knew they had nothing, so I said, 'Get out of my house.'"

Maher also announced that he had started a petition on Change.org formally calling for April 20 to be declared a national holiday.

"Now that marijuana is legal in one form or another in 24 states and counting, I'm here to urge you to sign my petition to make 4/20 a national holiday," he wrote. "We celebrate everything from Arbor Day to Groundhog Day to a National Day of Prayer. It's high time we had a weed day."

Watch Maher's fairy tale, as posted online on Friday, below.