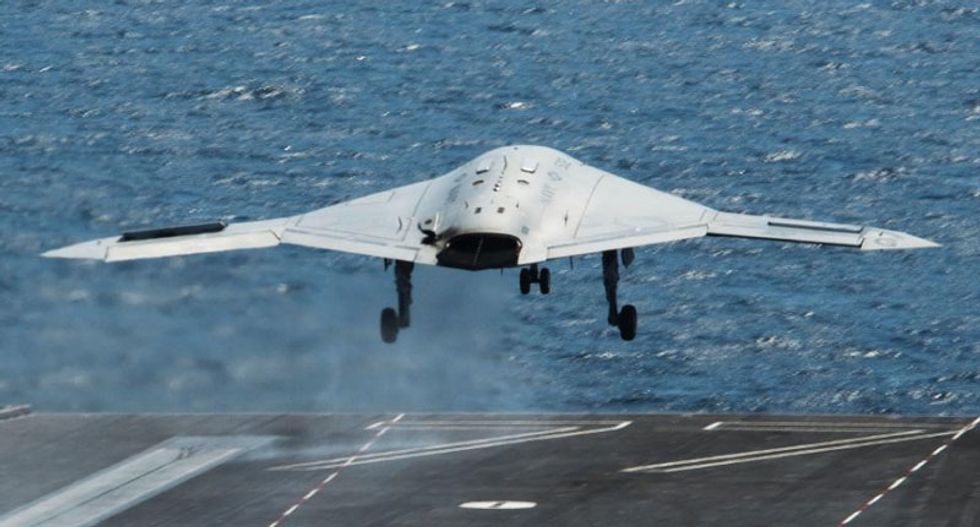 The US Navy announced it had successfully completed the first in-flight refueling of a X-47B drone, pictured, widely increasing the use and range of the unmanned aircraft (AFP Photo/Jim Watson)

The US Navy announced it had successfully completed the first in-flight refueling of a drone, widely increasing the use and range of the unmanned aircraft.

In a flight along the eastern coast of the United States, the unmanned prototype X-47B approached a tanker aircraft, managed to snag its refueling boom and received two tons of fuel, the US Navy said.

"In manned platforms, aerial refueling is a challenging maneuver because of the precision required by the pilot to engage the basket,” said Captain Beau Duarte in a report by the Navy.

"Adding an autonomous functionality creates another layer of complexity."

Many US manufacturers are vying to build an unmanned plane that can be the future of military flight, but disagreements between the US Congress and the Navy have slowed development.

The Navy is particularly interested in an intelligence drone that can spend uninterrupted hours in the air collecting information.

Several influential Republican leaders in Congress are pushing for an offensive drone able to carry bombs and missiles over long distances.