US sends carrier to Yemen waters with eye on Iran convoy 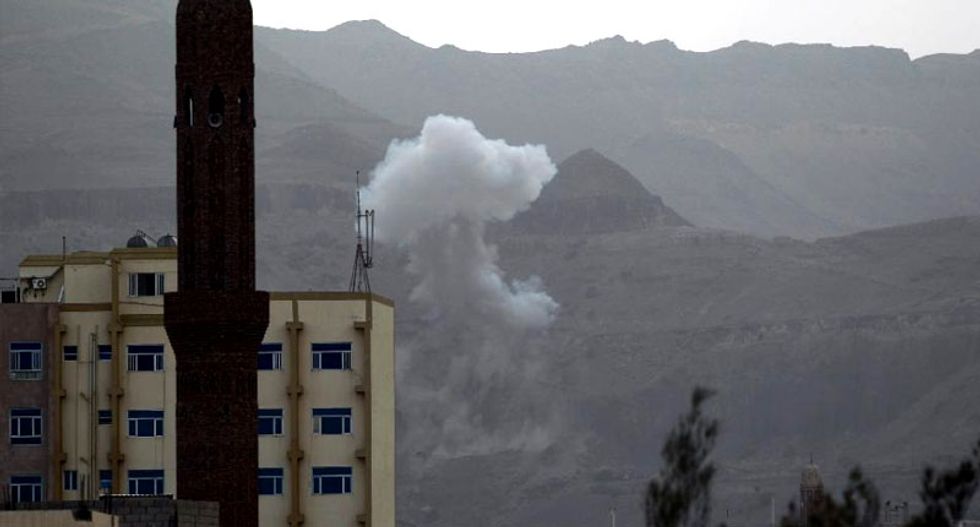 A US aircraft carrier was headed to the Arabian Sea Tuesday as Washington said it was monitoring Iranian vessels suspected of carrying weapons to Huthi rebels in Yemen in violation of a UN embargo.

The US Navy said it was sending the USS Theodore Roosevelt and guided-missile cruiser USS Normandy "to ensure the vital shipping lanes in the region remain open and safe".

The deployment brings to nine the number of US warships in the area.

The Iranian convoy is comprised of nine ships, including two patrol boats, a senior US defence official told AFP, saying its exact destination was unknown.

A coalition of Sunni Arab nations led by Saudi Arabia launched an air campaign against the rebels last month, vowing to restore the authority of President Abedrabbo Mansour Hadi, who fled to Riyadh as the rebels advanced on his southern refuge Aden.

The United States says it is not taking part directly in the strikes, but is providing intelligence and logistical support.

US officials said that if an interception of the Iranian vessels proved necessary, it would likely be carried out by warships of the Saudi-led coalition.

One said the convoy had passed through the Strait of Hormuz to leave the Gulf and was now headed west, potentially towards Yemen.

Saudi-led warplanes pressed their air strikes against the rebels and their allies in the security forces overnight as the civilian death toll from a Monday raid on a missile depot in the capital rose to 38.

A further 532 people were wounded when the twin strikes sparked powerful explosions that flattened nearby houses, medics said.

The base belongs to the missile brigade of the elite Republican Guard, which remains loyal to former president Ali Abdullah Saleh who has been accused of siding with the Huthis in their fight against Hadi's forces.

Rebel spokesman Mohammed Abdulsalam slammed the "barbaric crime" insisting on his Facebook page that the "aggression will only unite the Yemeni people."

A Saudi spokesman made no comment at a Monday media briefing.

The coalition says it has carried out more than 2,000 strikes since the start of the campaign, gaining complete control of Yemeni airspace and knocking out rebel infrastructure.

Any chance of a swift diplomatic solution faded as Saudi ambassador Abdallah al-Mouallimi told UN chief Ban Ki-moon "certain conditions" must be met for the air campaign to be suspended.

He said those were clearly spelt out in a resolution adopted by the UN Security Council last week which imposed the arms embargo on the rebels.

The resolution demands that the Huthis pull back from all the territory they have seized, including from Sanaa, and that they return to peace talks.

Ban had called on Thursday for an "immediate ceasefire" and time for a "passage to real peace."

The UN says the conflict has left hundreds dead and thousands wounded, and there has been increasing concern of a major humanitarian crisis.

Iran -- Saudi Arabia's regional rival -- has offered to mediate and set out a four-point peace plan but it was rejected by Hadi's government on Monday.

"Any mediation effort coming from Iran is unacceptable because Iran is involved in the Yemen issue," Foreign Minister Riyadh Yassin said.

Yemen has long struggled with deep tribal divisions and an insurgency by Al-Qaeda in the Arabian Peninsula (AQAP), considered by Washington as the jihadist network's most dangerous branch.

Al-Qaeda has taken advantage of the chaos to seize swathes of territory in Hadramawt province in the southeast, including its capital Mukalla.

On Monday, a US drone strike killed five suspected Al-Qaeda militants in the neighbouring province of Shabwa.