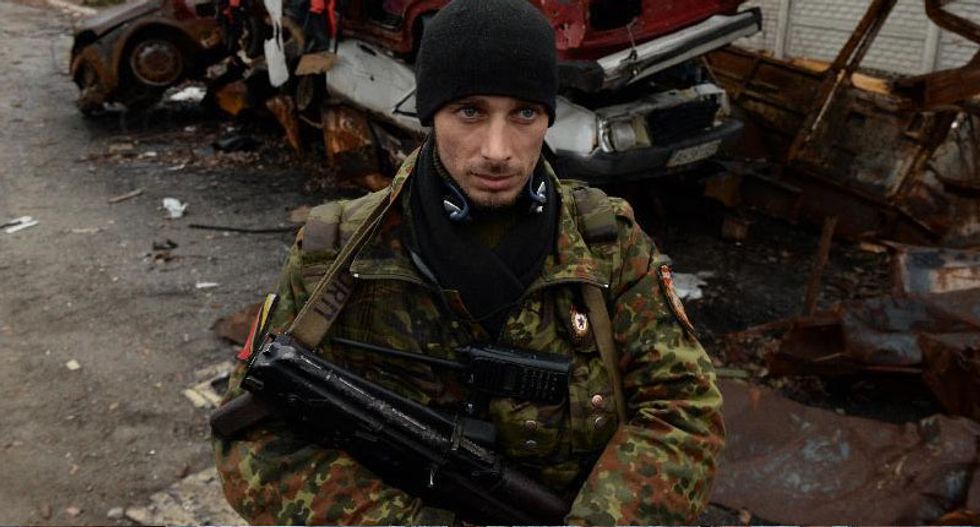 An armed supporter of the self-proclaimed People's Republic of Donetsk stands on December 16, 2014 among destroyed homes and cars in the eastern Ukrainian city of Donetsk (AFP Photo/Vasily Maximov)

US paratroopers Monday began training Ukrainian government forces who will fight pro-Russian separatists in the east, angering Moscow as the deadly conflict rumbles on in the ex-Soviet country.

Ukraine President Petro Poroshenko welcomed troops from the US 173rd Airborne Brigade in a rain-soaked ceremony at a military base in Yavoriv, western Ukraine, to launch Operation Fearless Guardian.

"We are the eyewitnesses and direct participants in forming the new Ukrainian military, which like the phoenix is rising again after years of decline," Poroshenko told the assembled troops.

"This is not only a war for the independence of Ukraine, but also a war for freedom and democracy in Europe and the whole world."

Officials said some 300 US troops will train 900 members of Ukraine's National Guard, which is deployed in the east where heavy artillery fire is rumbling on despite a February ceasefire.

The United Nations says more than 6,000 people have been killed in the conflict in the past year and more than a million civilians have been displaced.

US Army Major Michael Weisman told AFP the mission would provide training in individual and medical skills and defence manoeuvres with the kind of weapons already used by the Ukrainian forces such as AK-47 assault rifles.

As the US brigade arrived in Ukraine last week from its base in Italy, Russia warned the move could "destabilise" Ukraine and said it was a step towards the United States arming .

Washington has sent $75 million (70 million euros) worth of non-lethal military aid to Kiev, but has so far held off from supplying arms.

Britain has also deployed personnel to Ukraine to train government forces, in a mission that ministers said would involve up to 75 trainers at a time. Canada announced last week it would also send 200 trainers in the summer.

US troops have trained with Ukrainian forces in the past, but it is the first time Washington has trained members of Ukraine's recently re-formed National Guard.

"It is the first time that joint exercises of such scale and content have been carried out in Ukraine," Poroshenko said.

"I am sure the exercises we are launching here today will be effective in reinforcing and stabilising the situation."

Kiev and the West say there is mounting evidence that Russia is arming separatists who control parts of eastern Ukraine and is sending troops to fight alongside them. Russia has repeatedly denied this.

On Monday Ukrainian army spokesman Andriy Lysenko said shelling in the east eased on Sunday, but intelligence services had detected scores of vehicles bringing arms into eastern Ukraine from Russia over recent days.

France and Germany brokered a ceasefire agreement in February but European OSCE observers in eastern Ukraine say exchanges of artillery fire have continued over recent weeks.

On Monday however, OSCE Secretary General Lamberto Zannier said monitors had brokered a truce in one flashpoint village, Shyrokyne, near the strategic government-held city of Mariupol.

"There is a good chance for peace at this moment and we need to invest as much as we can in this," Zannier told AFP during a visit to Lithuania. "But there is always a risk of relapse in the conflict."

Poroshenko said there had been negotiations on setting up a 24-hour observation post for the OSCE in Shyrokyne, in comments quoted by the Interfax-Ukraine news agency.

"We hope that it will be achieved in the coming days through joint efforts with our partners."