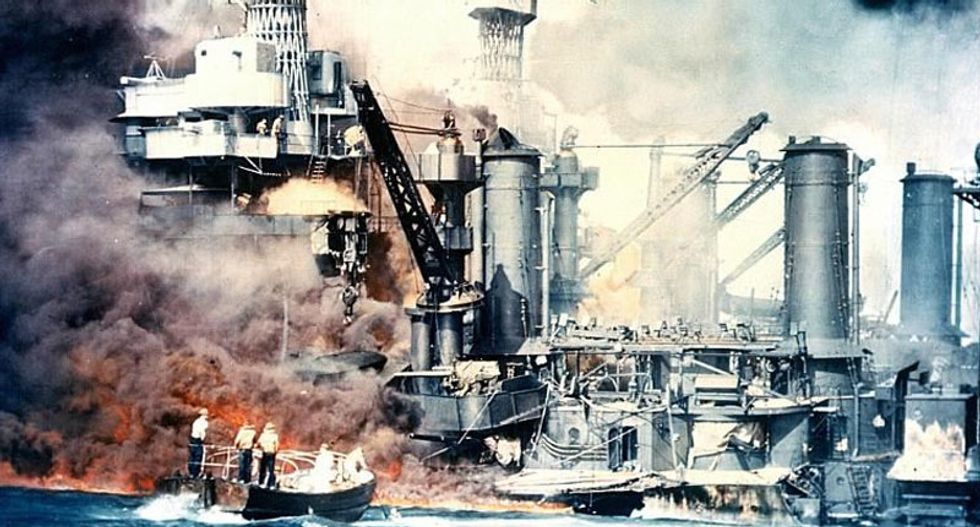 Around 2,400 Americans died when Japan launched a devastating surprise attack on the Pearl Harbor naval base (AFP)

The US military plans to exhume the remains of 388 Americans killed in the 1941 Japanese attack on Pearl Harbor, in an unprecedented bid to identify troops using DNA testing, officials said Tuesday.

The effort will focus on sailors and Marines from the USS Oklahoma who could never be identified, more than seven decades since the surprise attack that launched America's entry into World War II.

The ship sank when it was it struck by Japanese torpedoes in the Pearl Harbor attack, killing 429 sailors and Marines. Remains of most of the crew could not be identified and were eventually interred at the National Memorial Cemetery of the Pacific in Honolulu.

Under the Pentagon's decision, the remains of 388 unidentified crew from the Oklahoma will be disinterred from the cemetery and transferred to a Defense Department laboratory in Hawaii.

The lab, run by the Defense POW/MIA Accounting Agency, will analyze the remains using forensic techniques, "to include DNA testing," the Pentagon said in a statement.

"Recent advances in forensic science and technology, as well as family member assistance in providing genealogical information, have now made it possible to make individual identifications for many service members long-buried in graves marked 'unknown,'" Deputy Defense Secretary Robert Work said in a memo.

The Defense Department "remains committed to fulfilling its sacred obligation to achieve the fullest possible accounting for US personnel lost in past conflicts," Work said.

Troops who are positively identified will be given burials with full military honors.

"While not all families will receive an individual identification, we will strive to provide resolution to as many families as possible," Work said.

The Pentagon's number two ranking official also approved a new policy that could open the way to the exhumation of unidentified troops at other military cemeteries.

To permit exhuming remains, research must indicate that at least 60 percent of the troops to be disinterred can be individually identified, Work said. And Pentagon experts will need to collect relevant family reference samples for comparison with any DNA taken from remains as well as medical and dental records.

Tuesday's announcement reflects the US military's elaborate and costly commitment to trying to find and identify those still missing from conflicts dating back to World War II. The Pentagon sends forensic teams every year to remote crash sites in the Pacific to look for the remains of air crews.