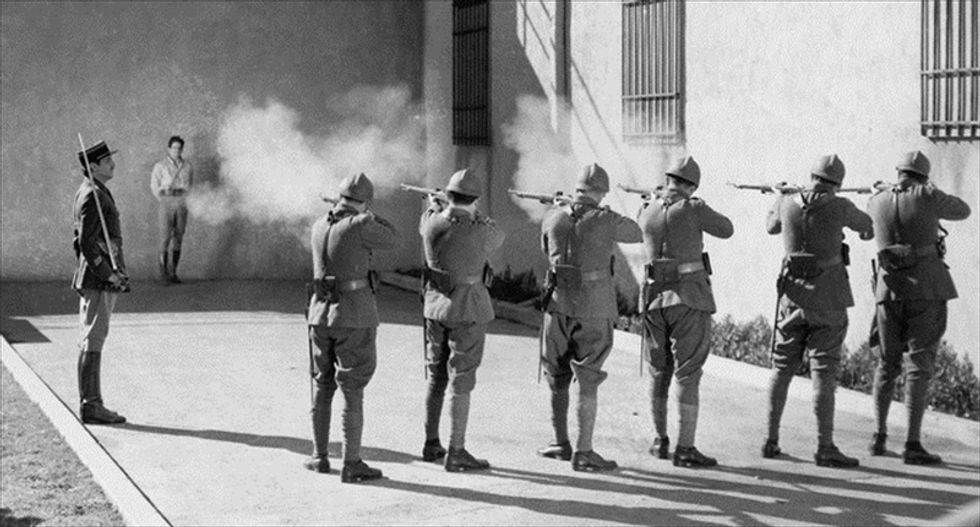 In March, Utah’s governor signed legislation that will bring back the firing squad as the state’s official execution method in the event that injection – the method used by every state that still retains the death penalty – is no longer possible.

Utah’s legislation has received a lot of attention, in part because the state occupies a symbolically important place in the history of the modern American death penalty.

In 1977, it was the first to kill anyone after a ten-year suspension of executions in the United States. (The Supreme Court had found the death penalty capriciously applied, and thus unconstitutional, in a 1972 case. But it permitted executions to resume four years later when states presented the Court with new sentencing guidelines aimed at reducing arbitrariness.)

Standing in front of five rifles poking through a slotted wall, convicted murderer Gary Gilmore famously uttered, “Let’s do it,” and with his death, the modern era of executions in the United States was born.

In addition, Utah has the distinction of being the only state in the past century to use the firing squad to kill people. Its modern use of a bloody, antiquated execution method has long set it apart from other states.

Why all the attention paid to Utah’s firing squad plan?

Despite Utah’s historical notoriety and uniqueness, the attention its back-up plan has received in the press in recent weeks is, from a practical standpoint, unwarranted.

The state has been responsible for only six of the 1,403 executions that have occurred nationally since Gilmore was put to death. Its last execution was five years ago. Before that, it hadn’t killed anyone in 11 years. It is unlikely to execute anytime soon.

And while Utah eliminated the firing squad altogether in 2004, leaving lethal injection its sole method of execution, it has permitted those sentenced before then to be executed by gun if they so wish. Ronnie Gardner, the most recent man executed in Utah, chose to be shot by the state’s correctional officers in 2010. So this new legislation is not exactly unearthing a relic from the distant past.

Still, the attention paid to Utah in recent weeks is important because it captures a national and historically unprecedented moment of disillusionment about the administration of the death penalty.

Utah’s decision powerfully represents a dawning realization that the cosmetic and humanistic concerns that have long shaped executions in the United States may be incompatible with one another.

The search for a quiet and humane form of execution

Since the nineteenth century, American elites have searched for a mode of execution that was professional in appearance and humane in practice, one that would display the state’s sober-minded restraint while taking life as quickly and painlessly as possible.

As early as the 1830s, states began searching for ways to take the condemned out of this world with as little fanfare and medieval ritual as possible. Worried about jeering execution day crowds, elites moved executions behind walls and eventually into the bowels of prisons where sober decorum would prevail.

A complex division of tasks within the execution chamber, moreover, cleansed the punishment of vengeful overtones.

The “law” was no longer a local sheriff publicly carrying out a hanging on behalf of an aggrieved community, but multiple bureaucrats, each responsible for performing a small step in a highly-choreographed procedure. One tied the hands, another bound the feet, another secured the noose, and another pulled the lever to release the trap door. No single person embodied the state.

And since the 1890s, a persistent dark optimism has produced revolutions in killing technologies every few decades.

From shooting and hanging to electrocuting to gassing to injecting, Americans have continuously introduced new killing technologies that have promised to minimize the discomfort, for witnesses and the condemned, caused by the state’s exercise of its sovereign power over life and death.

With lethal injections, first used by Texas in 1982 and gradually adopted by every other state with the death penalty, Americans thought they had finally arrived at a perfect solution.

What could better project an aura of professional competence and dignified restraint than an execution in which the condemned person looked like a patient being put to sleep for an operation?

But it hasn’t always gone that way. Officials sometimes have trouble accessing inmates' veins. In 2009, Ohio officials spent two hours unsuccessfully trying to establish an IV line into Romell Broom before giving up. Broom left the execution chamber alive, his body punctured in eighteen different sites by failed attempts to find a vein.

And last year, Oklahoma technicians incorrectly inserted the needle into Clayton Lockett’s groin, missing his vein and releasing the drugs into the surrounding tissue. After being declared unconscious, Lockett began writhing and attempted to sit up. He died of a heart attack 43 minutes after the execution began and seven minutes after rattled officials tried to abort it.

In response to incidents like these, attorneys for condemned inmates have launched a new legal attack on lethal injection.

The Court previously upheld the constitutionality of lethal injection in a 2008 decision, but much has changed since then. Cut off from European suppliers, who are barred by European Union regulations from selling drugs that will be used in executions, states have struggled in recent years to find reputable vendors of execution drugs. Some have revised their execution protocols altogether, incorporating new drugs that can be made in historically under-regulated domestic compounding pharmacies.

As they begin using new drugs from new sources, moreover, states continue to lack the expertise needed to safeguard the quality of the chemicals and ensure their proper use on inmates.

At its recent annual meeting, the American Pharmacists Association voted to discourage its members from participating in executions. Anesthesiologists, too, have been professionally barred from assisting prison personnel, leaving the condemned in the hands of under-trained technicians who lack the skills required to ensure that they are properly sedated when their hearts and lungs shut down.

As a result, the risk that lethal injection will cause preventable, excessive pain for the condemned may now seem unacceptably high. The Court has long held that while inmates are not entitled to a pain-free execution, they must not be subjected to “unnecessary pain.”

The recent and ongoing problems faced by states trying to carry out death sentences may convince a majority of the Justices that lethal injection is inherently failure-prone and therefore unconstitutional.

A trade off between appearance and reliability

In scrambling to come up with a plan B, officials in states like Utah are grappling with the fact that there may be a trade-off between an execution that is easy to watch when it goes according to plan and one that ends life quickly and reliably.

In a survey of nearly 9,000 executions that have happened in the United States, legal studies scholar Austin Sarat found that lethal injection was by far the most error-prone mode of execution of them all. While three percent of all executions have been botched since 1900, over seven percent of lethal injections haven’t gone according to plan.

Shooting people kills them more quickly and reliably than electrocuting, gassing, or poisoning them. But it’s harder to watch or read about than lethal injection.

The raw violence of the act puts it at odds with the aesthetic values that have historically shaped the development of capital punishment in the United States. Guns uncomfortably blur the line between the righteous violence of the state and the lawless violence of the criminal. The gun is, historically speaking, the only instrument of execution that is also commonly used by criminals. Its use in executions reminds us of a past in which there was less of a distinction between the state that carried out the law and those it punished.

Indeed, in its jarring loudness, its bloodiness, and its mutilating effects on the body, execution by firing squad comes much closer to expressing the “eye for an eye” logic that has long stoked Americans’ demand for the death penalty, but that has, since the nineteenth century, been carefully excised from its actual administration.

That, in the end, is what is most newsworthy about Utah’s decision to return to the gun. In the violent imagery it conjures, execution by firing squad has the power to remind Americans of a simple truth that lethal injection has, for a long time, made it easy for them to forget: executions are acts of extreme, body-mutilating violence.