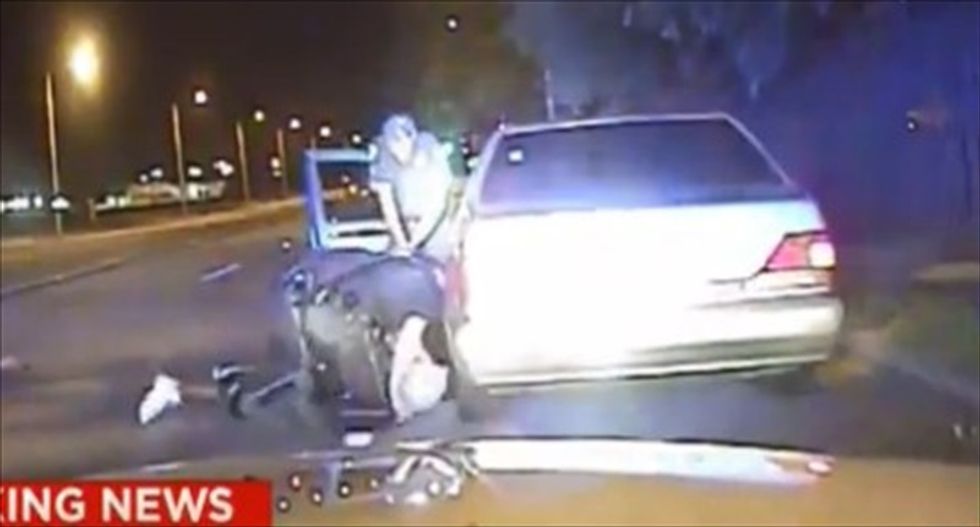 Officer Michael Slager (standing) prepares to use his Taser on Julius Wilson during a traffic stop. [YouTube]

Police officer who killed Walter Scott is one of three patrolmen named in lawsuit filed by Julius Wilson, who says Slager used a stun gun on him

The police officer who killed Walter Scott in South Carolina has been sued by another black resident of North Charleston, who alleges he was tased in the back by Michael Slager while lying face-down on the pavement.

Slager is among three patrolmen named in a lawsuit filed by Julius Wilson, who said he was arrested after being stopped in his car in August last year. Wilson is also suing the city of North Charleston, the city police department and police chief Eddie Driggers.

Speaking at a press conference on Monday, Wilson described Slager and his colleagues as “bad, corrupt cops”. He said: “The use of excessive force or punishment to torture suspects is not something that should be tolerated by the North Charleston police department.”

Wilson accuses the police of violating his constitutional rights. He is seeking damages and a jury trial, at which Slager could be called to testify. Wilson’s attorneys said they had obtained police car dashcam video footage from North Charleston officials supporting the allegations.

The lawsuit accused North Charleston of having “an unwritten policy to simply ‘look the other way’” that had “fostered an environment where improper and unconstitutional conduct was condoned, tolerated and/or emboldened” by Chief Driggers and city authorities.

A spokeswoman for Andrew Savage, Slager’s attorney, said in an email he was “not providing any statements or interviews at this time”. A spokesman for North Charleston did not immediately respond to a request for comment on the lawsuit.

Wilson, who has a criminal record, said he was stopped on 25 August because his vehicle had a broken tail light. Scott, 50, was stopped for the same reason on 5 April before fleeing and being shot dead by Slager.

Slager was charged with murder last week after cellphone footage surfaced showing he shot Scott as he ran away, igniting the latest in a series of controversies over the use of force by US law enforcement.

Wilson was stopped by an Officer Edwards, he said, who was joined 10 minutes later by Slager and an officer Clemens despite Wilson calmly “making small talk and laughing”.

After refusing to step out until he was told why he was being arrested, Wilson claimed, he was forcibly pulled out of his vehicle by Slager and the two other officers. The three then “forcibly restrained Wilson on his stomach on the pavement face down,” the lawsuit stated.

Despite Wilson “not moving, nor resisting” and lying with his hands above his head, the lawsuit claimed, Slager broke a silence among the officers by shouting: “Watch out! I’m going to tase!” He then allegedly “shot his NCPD-issued taser into Wilson’s back”.

The lawsuit alleged Wilson “writhed in pain from the electric shock”. It said when Slager warned his colleagues he was about to fire his taser, “Wilson was cooperating fully” and allowing the two other officers to place his hands behind his back.

Mario Givens, a third North Charleston resident, complained to the police department after being tased unnecessarily by Slager in September 2013. The department cleared Slager of wrongdoing in an internal review. Givens said last week he was considering suing Slager.

Wilson’s lawsuit was filed last Friday at the court of common pleas for Charleston County. A copy was released to the Guardian by the court. Wilson’s attorneys said they had previously decided against bringing a lawsuit but changed their minds after Slager’s shooting of Scott.

The attorneys dismissed suggestions they were acting opportunistically following a tragic incident. “We now have the fact that theres a pattern of abuse of this officer; it gives more credence to the lawsuit,” said Clekis.

Wilson was charged with driving under a suspended South Carolina licence and resisting arrest. He pleaded guilty to resisting arrest. The suspended licence charge was dropped, according to his lawsuit, which said he held a valid Georgia driving licence throughout.

Watch footage of Slager Tasing Wilson, as posted online, below.