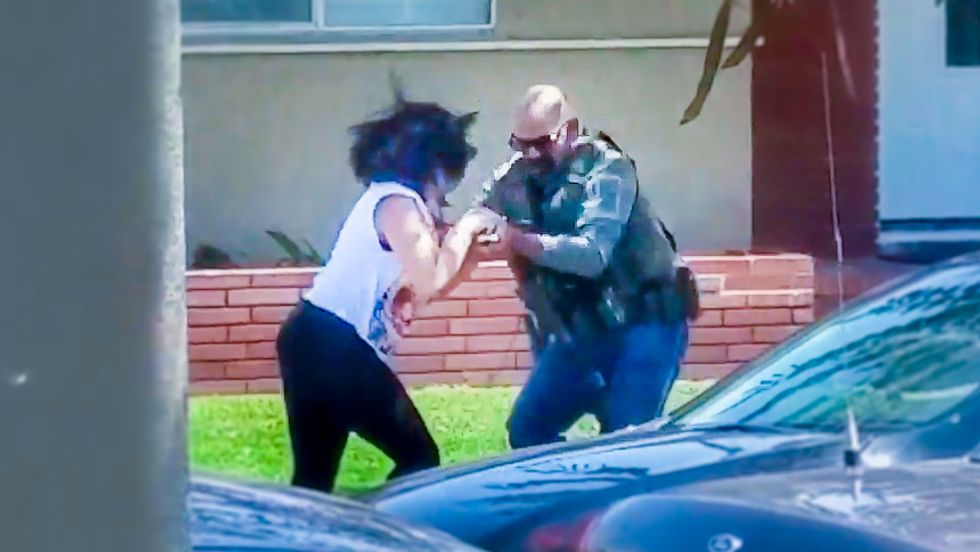 A U.S. Marshal reportedly snapped and violently destroyed a woman's cellphone while she was recording a group of law enforcement officers who were standing on a public sidewalk near Los Angeles.

In a YouTube video dated April 19, someone apparently positioned across the street from the incident captured video of a woman who was recording a group of men wearing tactical gear in South Gate, California.

The woman can be seen talking to the officers and recording them while they seemed to be ignoring her.

Eventually, a man carrying an assault rifle and wearing a different style of tactical gear walks toward the woman. As she backs up, he lunges at her, grabbing her cellphone with both hands. There is a brief struggle for the phone, but the man easily overpowers the woman and slams the device to the ground.

The phone can be heard smashing on the concrete sidewalk. The officer then kicks the phone at the woman, causing the person operating the camera to gasp.

Before the video ends, the officers can be seen walking away.

The description included with the video identified the men on the sidewalk as "South Gate/Montebello police." And according to the blog Photography Is Not A Crime, the man who smashed the cell phone was a United States Marshal.