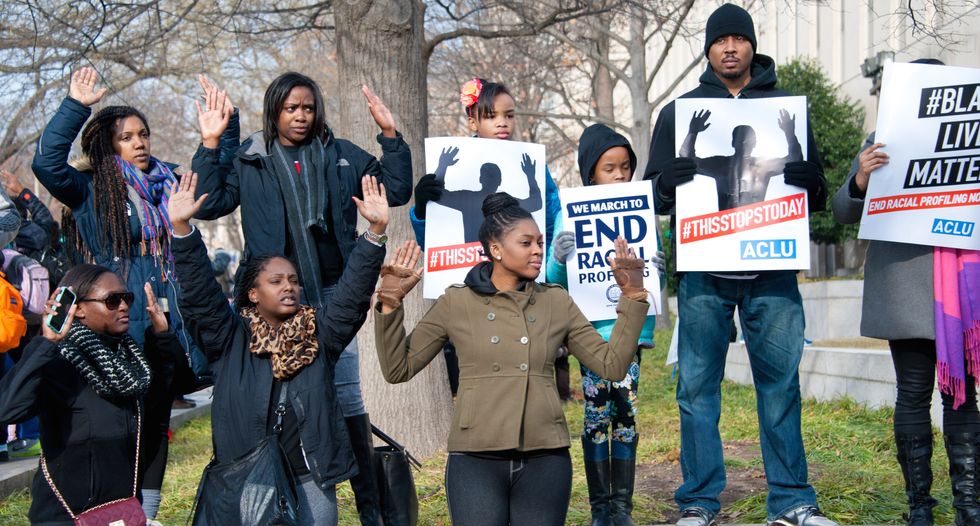 Protestors stand up against racism (Shutterstock)

A heating and cooling company that claims to serve the entire Denver region refuses service homes in a racially diverse neighborhood it refers to as "Mount Ghetto," a local Fox affiliate reports.

A concerned employee at Mile High Heating and Cooling in Westminster, Colorado alerted the "Problem Solvers" at FOX31 Denver to the company's racist service policies. To investigate the claim, the reporting team sent a producer to apply for an "appointment setter" position Mile High happened to be advertising at the time.

A manager at the company, who FOX31 Denver refers to only as "Andrea," hired the news producer to book appointments at "one of Denver's premier residential and commercial HVAC companies" almost immediately. Within an hour, Andrea was training the reporter on how to cold call around the region to identify new customers.

Andrea gave the producer a paper schedule of which zip codes to concentrate calls on in the coming days. The producer asked why one certain zip code -- the one for Denver's Montbello neighborhood -- had the words "do not call" written under it on the list.

"We call it Mount Ghetto," Andrea explained. She further elaborated that Montbello is a "colored neighborhood."

The Problem Solvers had enough evidence to conclude Mile High Heating and Cooling didn't seek out customers in Montbello. But would the company provide service to a home in that neighborhood if someone called and asked it to?

The answer, apparently, is probably not.

In cahoots with FOX31 Denver, grandmother and Montbello homeowner Pam Jiner called Mile High and asked the company for help with a broken furnace. An employee asked Jiner for her zip code and informed her they would call her back with details in a few minutes. But no one from the Westminster heating and cooling company ever called Jiner back.

A Problem Solver then called Mile High Heating and Cooling asking for the same service, using the same name, but citing a different zip code. A dispatcher booked her appointment immediately.

Jiner's neighbor Duane Topping shares her opinion, and describes the neighborhood's diversity as a strength rather than a weakness. “Those stereotypes are born of ignorance," Topping says. "I’ve grown up with all of these people in this neighborhood, so this is a family. We don’t care how much money you make, we don’t’ care what color you are, we don’t care what religion you are.”

"Saddened and stunned by what [they] found," FOX31 Denver reporters went in full news regalia to Mile High's offices to ask some follow up questions. When Andrea saw the reporters, she ran away and camped out in her office, thinking the investigators would eventually go away.

When she came out an hour later, however, the news team was still there.

"When you refer to colored people, what color are you referring to?" a journalist inquired of Andrea. "Are you a racist?"

The reporters later approached Kasey Dykman, who co-owns the company with his father, Kevin Dykman, as the younger Dykman was leaving work. He was wearing a shirt featuring a picture of Darth Vader and the words "Free Throat Hugs" at the time.

"Is this company racist?" the reporters asked. Dykman wouldn't respond.

Journalists then followed him as he went to a nearby Starbucks, where he met with his father. "Do you have something against people of color?" the Problem Solvers asked Mile High's owners. Reporters got silence in response.

"Do you have anything to say for yourself?" the journalists asked. Again, silence.

At 2:00 PM on Thursday, city leaders in Denver will hold a press conference at Graham Memorial Church of God In Christ. A protest will follow. The public is invited to attend.

We want to point out that the first company to register the name "Mile High Heating and Cooling" with the state of Colorado is located in Thornton, and is not related to the Westminster company that was the subject of the Fox31 investigation.

Watch Mile High employees in Westminster state they refuse to service "Mount Ghetto" and evade follow up questions by reporters: